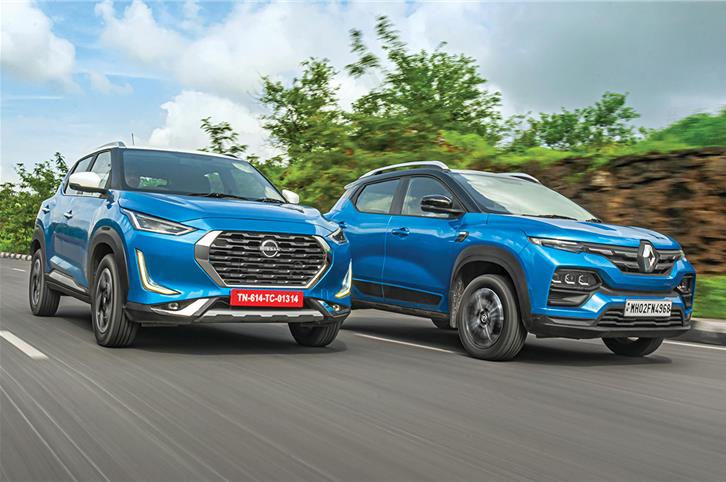 The Renault Kiger and Nissan Magnite are fruits of the same tree. We examine them with a fine-tooth comb to see what sets them apart.

Today, we’re comparing two cars that, on paper at least, are fundamentally the same. They’re built in the same plant, they share engines, transmissions and chassis, and if you have a poke around their cabins, you’ll notice many of the bits here are common too. Sure, these commonalities are draped in Renault and Nissan’s respective family garbs, inside and out, but could there be more that separates these two than just that?

We have both cars in their petrol-manual guises, and over the course of this test, we’ll see if we can unearth a few nuances that don’t show up on the spec sheet.

The Renault Kiger is one of the latest entrants to the compact SUV party. It uses the Triber’s CMF-A+ platform, which in turn is a modified, hardier version of the Kwid’s entry-level CMF-A platform. Carrying forward the brand’s chic crossover-esque design philosophy, the Kiger certainly looks fresh, and certain cues such as the flattened bonnet, squared-off wheel arches and high ground clearance go a long way to beef up its appearance. Its rear design, too, is full of character, with a steeply raked windscreen, striking C-shaped tail-lamps and thick bumper cladding with a contrasting skid plate that further add muscle. Yes, from certain angles it resembles its cheaper sibling, the Kwid, but that isn’t necessarily a bad thing.

The Nissan Magnite, with its more conventional upright design, looks the more SUV-like. Its snazzy styling, distinctive front end and smart-looking alloys, neatly paired with clean, smooth-flowing lines, is likely to have wider appeal. Interestingly, the Magnite is larger than the Renault in every dimension, if only by a few millimetres (it’s also 4kg heavier). However, both share a 2,500mm wheelbase, front and rear tracks of 1,536mm and 1,535mm, respectively, and 205mm of ground clearance.

The Kiger’s dashboard is well laid out and the designers seem to have opted for a more mature look, sticking to an all-black theme. Adding an upmarket touch are gloss-black finishes on some surfaces, as well as the use of textured plastics. Taking centre stage is a free-standing 8.0-inch touchscreen, and the climate control knobs with their monochrome read-outs (shared with the Magnite) look neat. The digital instrument cluster is better executed, with a sharper display and colours than the Nissan’s cartoonish animations. 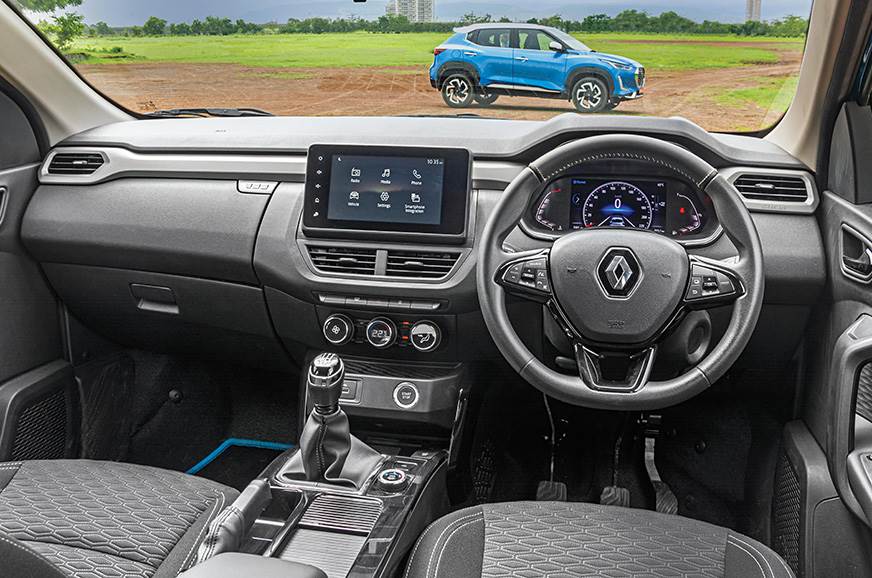 Not only is the Kiger’s cabin more pleasing to look at, it also offers more storage options

There are storage areas aplenty, with two large gloveboxes, a deep bin in the centre console, twin phone trays ahead of the gear console and large door bins. The Kiger’s seats are nicely contoured and provide ample lateral support, although the cushioning feels a bit firmer than the Magnite’s. 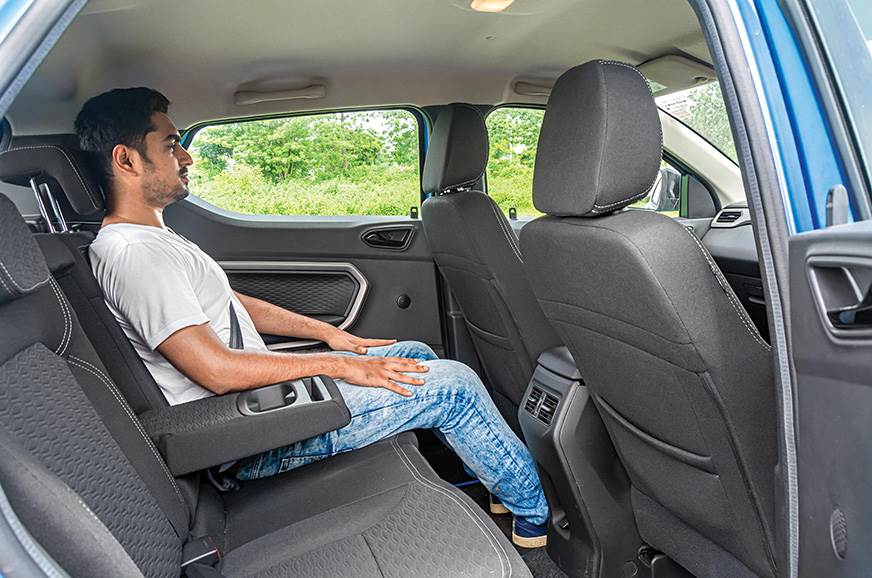 The driving position is nice and high, and there’s a wide range of seat height adjustment, but while forward visibility is good, the rear view is hampered by the short, steeply raked windscreen. This French compact SUV also comes with its share of quirky ergonomics. The power window switches are placed too far behind on the door pad, the driver’s footwell is cramped, and the gearbox and handbrake feel a tad too far away from the driver. 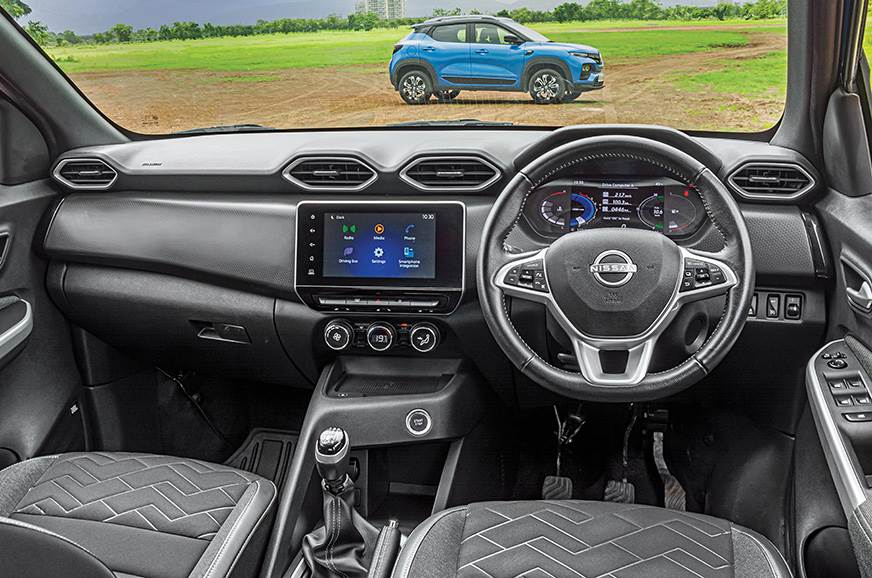 Splashes of silver, and cheerful design elements liven up the Magnite’s interiors.

The Magnite’s uncluttered interior is livened up by splashes of silver accents, as well as colourful touchscreen and digital instrument cluster displays. The Lamborghini-esque hexagonal air-vents look unique, as do the denim-like material on the door pads and armrests. What’s also nice is that, softer cushioning aside, the seat base is a bit longer, lending a bit more support for your thighs. 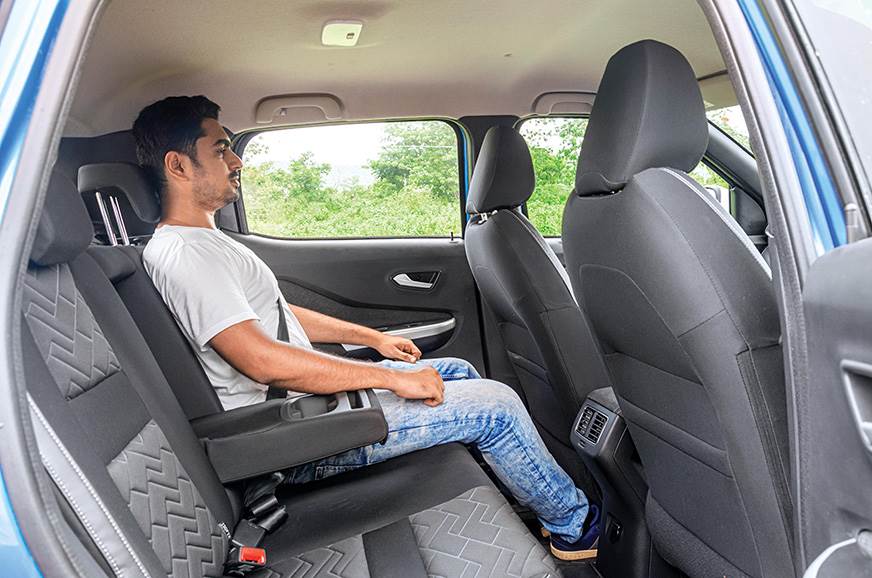 Space at the rear is ample in both cars, but because the Kiger’s front-seat travel is longer, it’s possible to liberate a bit more rear legroom. Both cars have a generous cargo area, and both offer the flexibility to fold the rear seats in a 60:40 split. On paper, it is the Kiger’s 405-litre boot that trumps the Magnite’s 336 litres, but the Renault’s taller loading lip makes loading heavier items a bit more cumbersome. 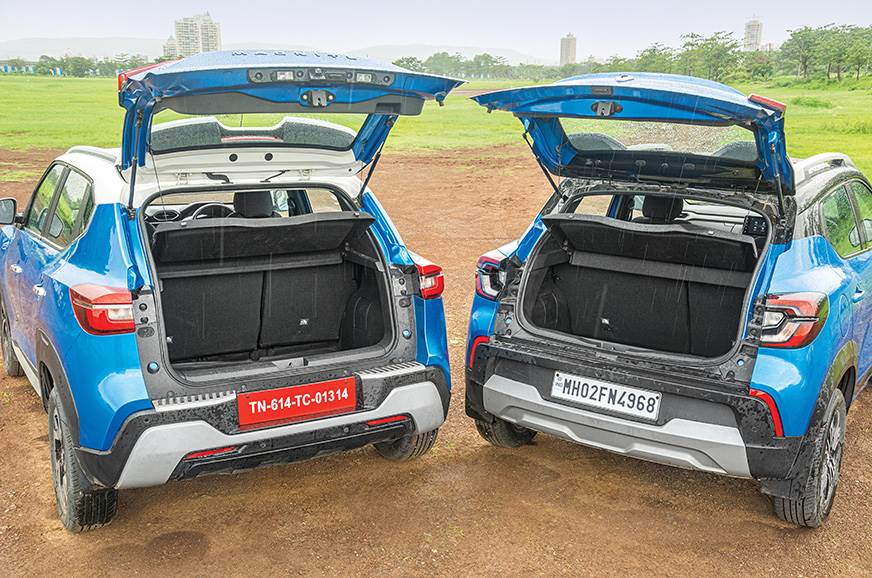 Kiger’s boot is larger, but loading heavy cargo won’t be as easy due to its taller lip.

In their top trims, these cars offer similar standard kit, like an 8.0-inch touchscreen with wireless Android Auto and Apple CarPlay, LED headlamps, 16-inch alloys, auto climate control, a digital instrument cluster, rear air-con vents, a reversing camera, ABS with EBD and dual airbags. Neither car, however, gets a sunroof. 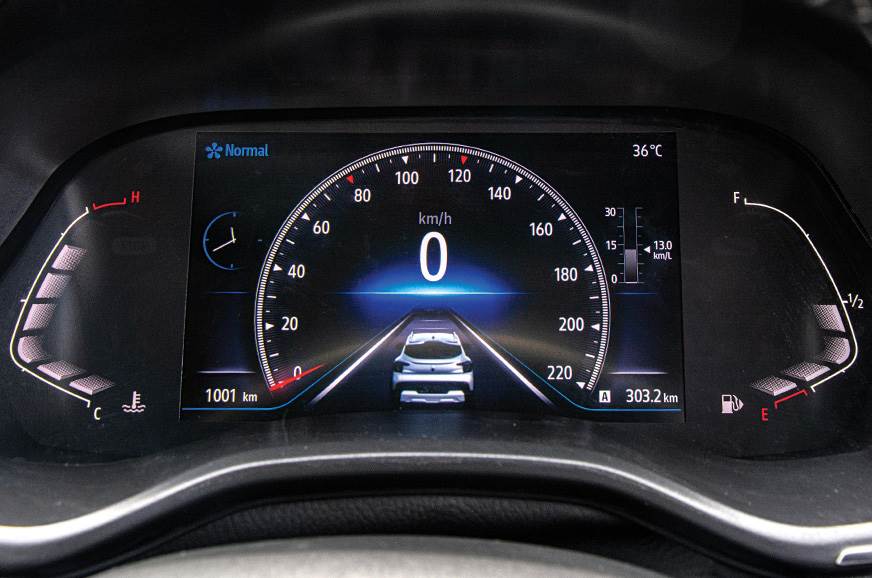 The Kiger ups the game with two additional side airbags, as well as drive modes, and an Arkamys-tuned eight-speaker audio system. While the Magnite misses out these features, it blows the Renault out of the water with kit like cruise control, 360-degree camera, ESP, traction control, hill-start assist and a tyre-pressure monitor. Moreover, you can get JBL speakers and connected car tech as optional extras. Speaking of options, both cars offer wireless charging, an air purifier, puddle lamps and ambient lighting at an extra cost, fitted at the dealership level. 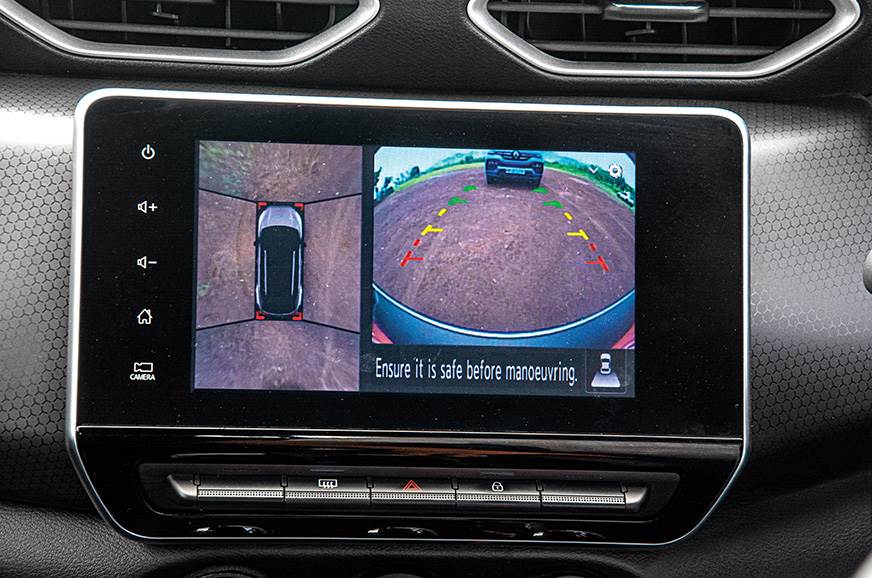 Heart Of The Matter

Powering both these cars is a 100hp, 999cc turbo-petrol engine, co-developed by Renault and Nissan. Unlike the competition, this small-capacity, lightweight motor sticks to indirect or multi-port injection, but it features state-of-the-art tech such as an electronically controlled wastegate, an exhaust manifold partially integrated into the cylinder head, twin variable-valve timing for the intake, and bore spray coating, all in the interest of improving thermal efficiency, performance and responsiveness. 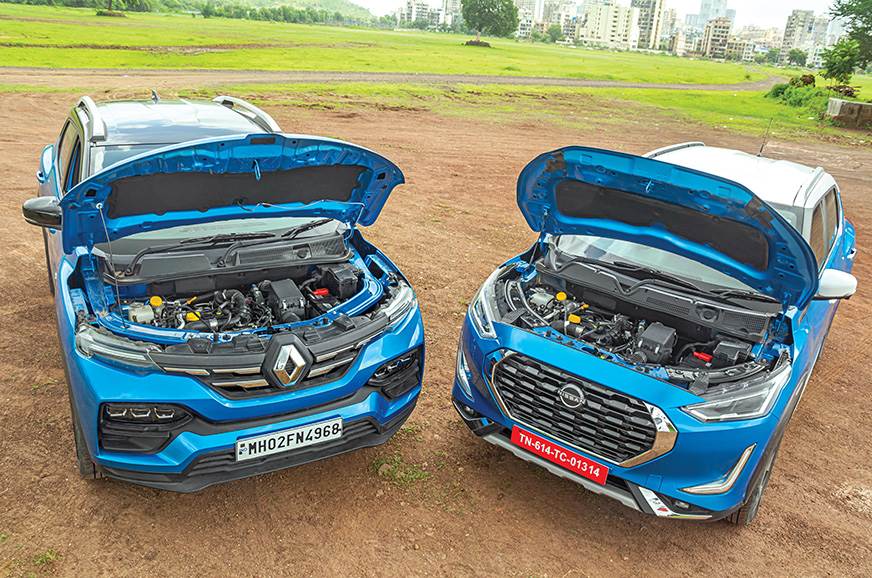 The turbo-petrol engine performs similarly in both these cars, but it feels a bit more refined in the Magnite.

In the Kiger, the three-cylinder unit has a slightly gruffer idle, with mild vibrations transmitted all across the cabin. Yes, these smoothen out on the move, but the overall sound insulation isn’t as robust as in the Magnite, so you hear the engine thrum a lot more, and it is only amplified as this motor spins faster.

The Renault gets three driving modes – Eco, City and Sport – and these make a substantial difference in terms of responsiveness, especially at part-throttle. Performance in Eco mode feels dulled down, with a lazy pedal  response compared to the other modes. With your foot at a part-throttle position, switch from Eco to City or Sport, and you’ll notice the car leap forward aggressively, as though it has been freed from its shackles. Sport mode, as its name suggests, feels the liveliest to the tap. Interestingly, at full throttle, these modes are overridden, and the acceleration timings are identical across the various modes. And, when exploring the Kiger’s entire rev band, you will notice an inconsistent power delivery with several, prominent flat spots across the range. 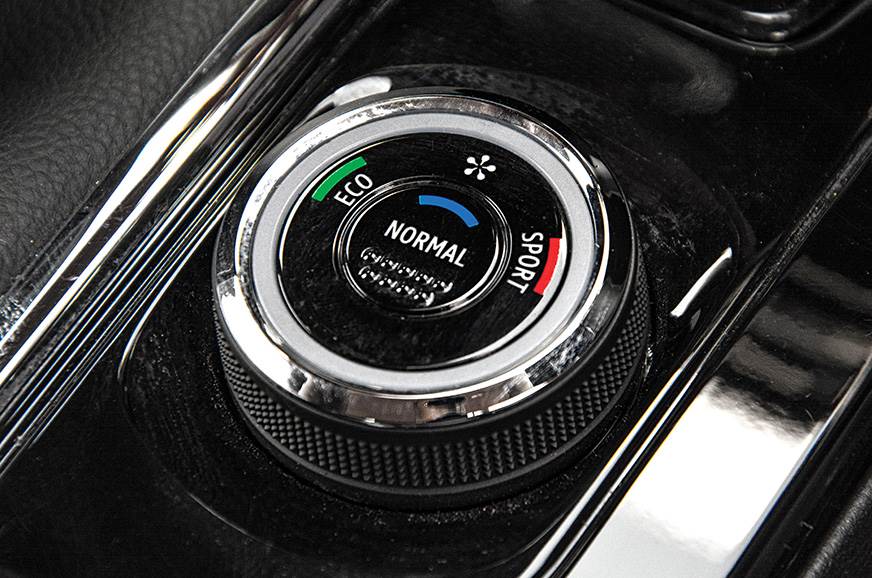 In the Magnite after the Kiger, the difference in engine sound levels is instantly noticeable, the Nissan settling at a much quieter idle. And while you can feel the three-pot engine rocking about on its mounts at idle, the vibrations are better controlled. The Magnite being quieter than the Kiger was further corroborated by our sound meter, be it at idle or on the move.

Like the Kiger, the Magnite builds speed from 1,700rpm, and boost comes on in a linear manner. Its ability to potter around town or make quick overtakes on highways is on par with the Kiger’s City mode, and even in the Magnite, this engine doesn’t like being revved. But unlike the Kiger, the flat spots across the power band aren’t as prominent. Pedal to the metal, the Magnite will just about out-drag the Kiger to 100kph, taking 11.19sec (versus the Kiger’s 11.54sec), and this gap widens to over 2sec by 140kph. But when it comes to rolling acceleration responses, from 20-80kph in third gear or 40-100kph in fourth gear, it is the Kiger that proves to be marginally quicker (see table). The differences are likely down to calibration, as the 4kg weight difference is unlikely to be a factor here.

Flat-out performance aside, it is the Kiger that feels a bit more city-friendly, with the drive modes exploiting its engine’s performance better, particularly the throttle responses in its Sport mode. What’s more, the Renault’s clutch is a bit easier to modulate and doesn’t feel as snappy as the Magnite’s, and while both 5-speed manuals have an easy shift action, they simply lack the buttery-smooth shift quality of some rivals.

Another area these cars feel very different is in their suspension tuning. The Kiger is stiffer sprung, so while it doesn’t feel as absorbent as the Nissan at low speeds, it still tackles road imperfections and bumps rather competently. It has an edge over the Nissan at high speeds, where it maintains its composure like a much more expensive car. Around corners, the Kiger feels tauter and more agile, and its steering feels weightier and more consistent as you turn, translating into higher driver confidence. 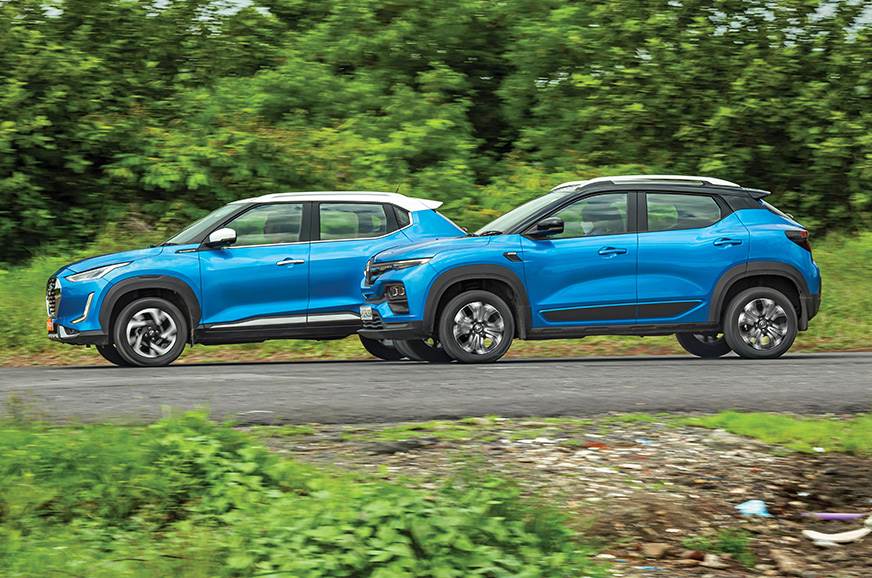 The Magnite’s steering, on the other hand, feels stickier, weighs up inconsistently and doesn’t return to the centre position as fluidly as the Kiger’s. And while the Magnite soaks up bumps a bit better at low speeds, passengers tend to rock from side to side over bad roads. Neither car gives a reassuring brake pedal bite, but it is the Magnite that impresses in panic braking scenarios, coming to a complete halt from 80kph in a shorter distance.

The Magnite’s styling and its upright stance will most likely appeal more to SUV-seekers. Its seats are a bit more comfortable, and cabin ergonomics are more agreeable. What’s more, the Nissan’s engine is more refined, it offers stronger outright performance, and for a marginal premium over the Renault, this car packs in some crucial features like cruise control, a 360-degree camera, ESP, traction control and hill-start assist, all of which the Renault misses. 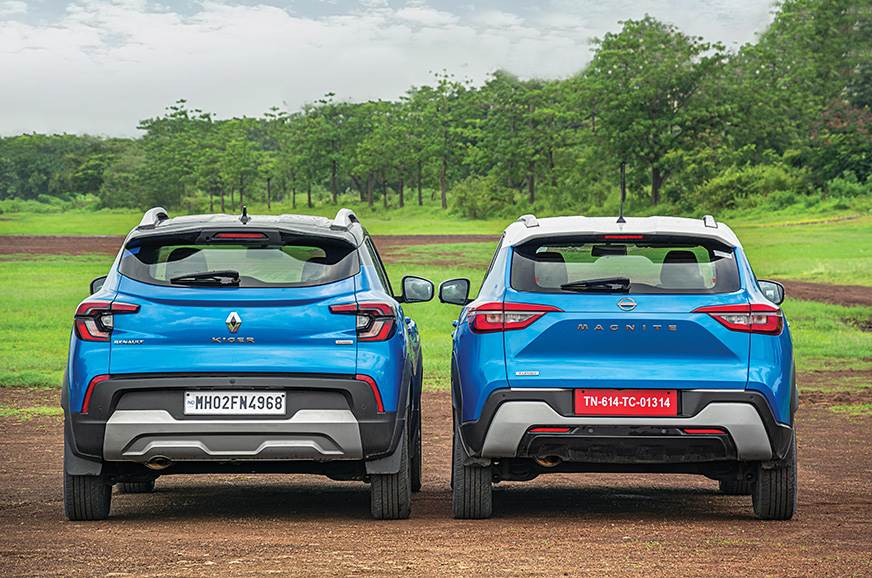 The Kiger, on the other hand, isn’t as refined, and some cabin ergonomics aren’t perfect either. But this Renault fares better in other areas, particularly its ride and handling balance. Its road manners are better sorted and it feels a bit more composed on the highways. Its steering is nicer and weighs up more consistently too. The drive modes make it feel peppier in the city, and the Kiger’s interiors not only look appealing, but also offer better storage; there’s the larger boot too.

At the end of the day, both these are credible compact SUVs with seriously attractive price tags, and with so many commonalities between them, personal preferences will play a big role in choosing one over the other. If you simply want a feature-loaded compact SUV, the Magnite is the one to go for, but the Renault Kiger’s nicer drive experience lends it a more premium feel, and for that reason, it noses ahead in this contest.