The S-Presso ‘mini-SUV’ is Maruti’s long overdue answer to the ‘SUV-inspired’ Renault Kwid. We cut through the marketing speak to find out which is the better‘car’. 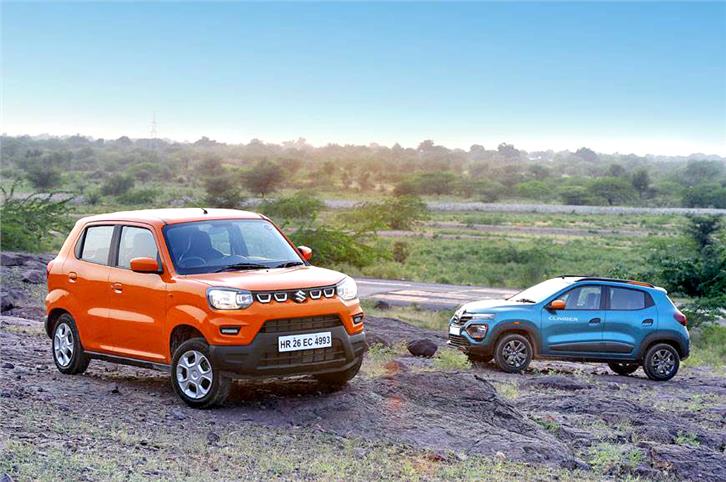 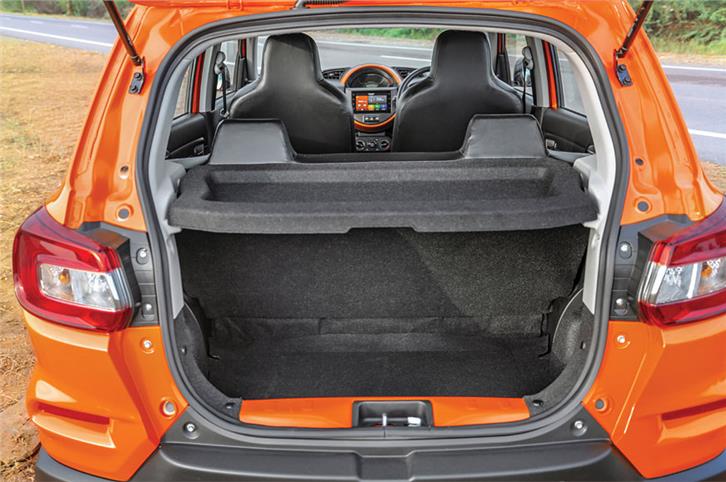 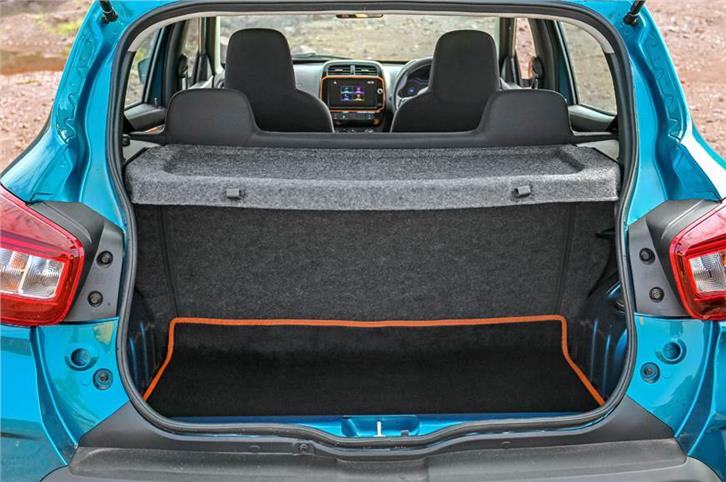 You have the Renault Kwid to thank for the genesis of the Maruti Suzuki S-Presso because while Maruti might have reigned supreme in the budget segment for decades, the refreshingly different Kwid, launched in 2015, sure rocked the boat. With the Kwid, Renault successfully established that a budget hatchback need not be a basic hatchback. The car came loaded with class-first features, like a touchscreen and digital speedometer and, of course, there was the Kwid’s biggest draw – the way it looked. Styled to look like a mini-Duster, the Kwid cashed in on Indian buyers’ infatuation with SUVs.

Maruti made clear its intention of coming up with a Kwid fighter with the Concept Future S at Auto Expo 2018, and what we have today is the final product along with the car it’s here to beat. In case you are wondering why the Kwid pictured here looks different, it’s because this is the facelifted version that made its debut just a day after the S-Presso’s launch! Renault clearly is in no mood to cede ground.

What makes the contest all the more interesting is that there’s little between the comparable engine and gearbox versions in terms of price, power and economy. Question is, which one is more worthy of your money?

On the face of it

The S-Presso and Kwid flaunt their SUV-ness to varying degrees. With its upright pillars, flat bonnet and relatively high roof, the S-Presso has the more SUV-like shape. Does that make it the more attractive car? No. Thing is, the Maruti is too narrow for its height and simply doesn’t look substantial enough for anything that wants to be thought of as an SUV.  The styling is also a miss to my eyes. The toothy front grille and the cladding lower down work but the sides and tail are far too plain. And while the squared-out wheel arches add some volume to the body, they also make the 14-inch wheels look smaller than they are. You can embellish the S-Presso with side cladding, alloy wheels, LED DRLs and more but the add-ons can only do so much for the look.

The Kwid, on the other hand, is a more traditionally handsome car. It’s got classic hatchback proportions but its significantly longer and wider body means it has the larger footprint. Helping the updated Kwid’s stance are its upsized 14-inch rims, and as an added plus, ground clearance is up 4mm to 184mm, versus the S-Presso’s 180mm. The Kwid’s SUV link? It comes from the wheel cladding and chunky runners at the sides. The roof rails on the top-spec Climber versions also help deepen the connect.

I don’t think I’m alone to think Renault’s designers have hit it out of the park with the facelift. The restyled front end features a new-age split headlamp setup, with standard-fit LED DRLs on top and the main headlights lower down, and the result is really eye-catching. The chunky surrounds for the large headlights are also nicely done, while the orange accents on the bumper add flair to the Climber versions’ appearance. The smoked-grey wheel covers on the Climbers also look far more imaginative than the S-Presso’s basic units. The new LED light guides on the tail-lamps also do their bit to update the Kwid’s appearance.

These cars carry their exterior personalities on the inside as well. Once again, the S-Presso comes across as a car that's trying hard to be different with its centrally stacked instruments, an arrangement not everyone will take readily to. That said, the Mini-like look for the centre console is nice, and the coloured surround for the side air-con vents helps brighten things up. But if there's something drivers will particularly like, it's the view out. The high seating and upright pillars are a boon and make the S-Presso an easy car to get comfy in.

You sit much lower in a Kwid, and the initial impression is also of sitting in a smaller car. Drivers will find themselves sat closer to their co-passenger, there's less headroom and, in general, the Kwid cabin doesn't feel as airy as the S-Presso's. However, you will like what you see inside the Kwid's updated cabin. The dashboard has been revised (the top glovebox area now houses the optional passenger airbag), the touchscreen is now a size larger and the new part-digital dials include a tachometer too. The bright seat upholstery looks snazzy while the new steering with leather inserts enhances the look of things. Unfortunately, overall cabin quality hasn't taken the same jump up. The Kwid's plastics are scratchy and don't feel as nice as the textured surfaces you'd find in the S-Presso. 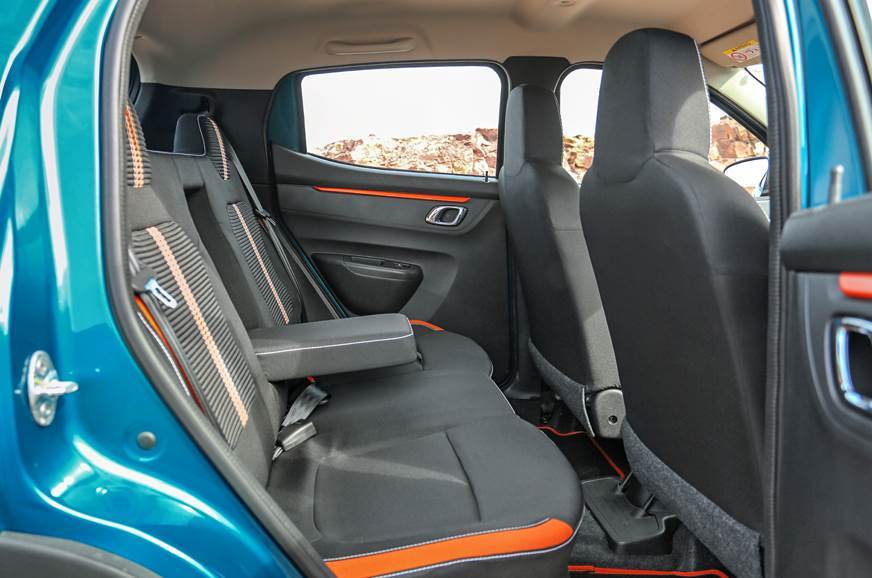 But if there's one area where the Kwid is completely outdone, it's in rear-seat space. Where there's just about enough room for average-sized adults in the back of a Kwid, the S-Presso's rear seat can host two six-footers in good comfort. Vertical space has been used to the fullest to maximise useable room. There's ample headroom, a surprising amount of knee room and good shoulder room too. What's more, rear-seat occupants also sit more comfortably in the S-Presso. The slight knees-up seating position in the Kwid gets tiring on long journeys, but the Climbers do get a class-first rear centre armrest and that does up comfort to an extent. What's a pity is that both cars come with minuscule rear headrests that will offer limited whiplash support. 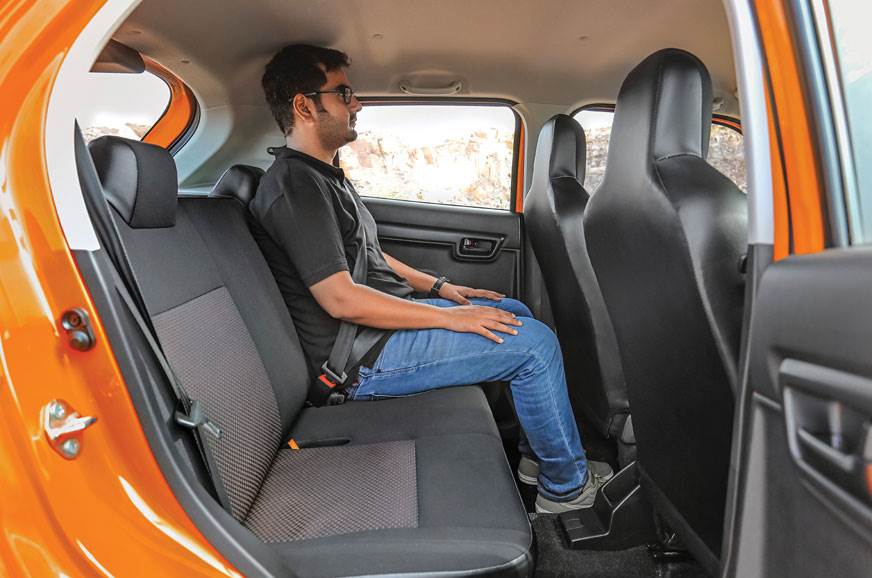 Both cars offer a fair amount of storage space with bottle holders at the front doors and smaller recesses on the dashboard. The Kwid's cavernous glovebox is larger though, while the S-Presso is the only one to offer a bottleholder for rear seat passengers. On airport runs, you'll find the S-Presso's better-shaped 270-litre boot slightly more accommodating than the Kwid's 279-litre boot. Do note, the updated Kwid's boot size is down from the original's 300-litre figure owing to the incorporation of larger wheel wells.

Both cars come with their fair share of creature comforts. Power steering, remote locking and front power windows are standard on the top-spec versions of both cars, but only the Kwid offers rear power windows as a Rs 8,000 option. Again, while digital speedometers are among the things you'd find common on both models, a tachometer is exclusive to the Renault. The Kwid is also the only one with a reverse camera. The Maruti, on the other hand, goes one-up with steering-mounted audio controls and internally adjustable mirrors. As for infotainment systems, the Kwid's new 8.0-inch touchscreen is a size larger than the S-Presso's 7.0-inch unit, though both screens are equally slick and come bundled with Android Auto and Apple CarPlay. 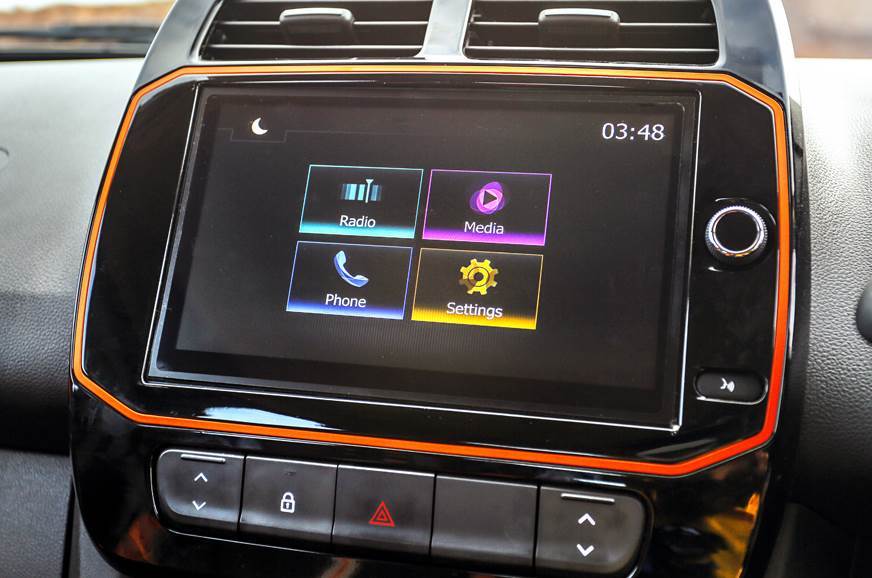 Switching focus to the all-important matter of safety, it's reassuring to know is that both cars comply with India's latest crash protection norms. Top-spec S-Presso's do get dual airbags as standard. A passenger airbag is a Rs 8,000 option on the Kwid. 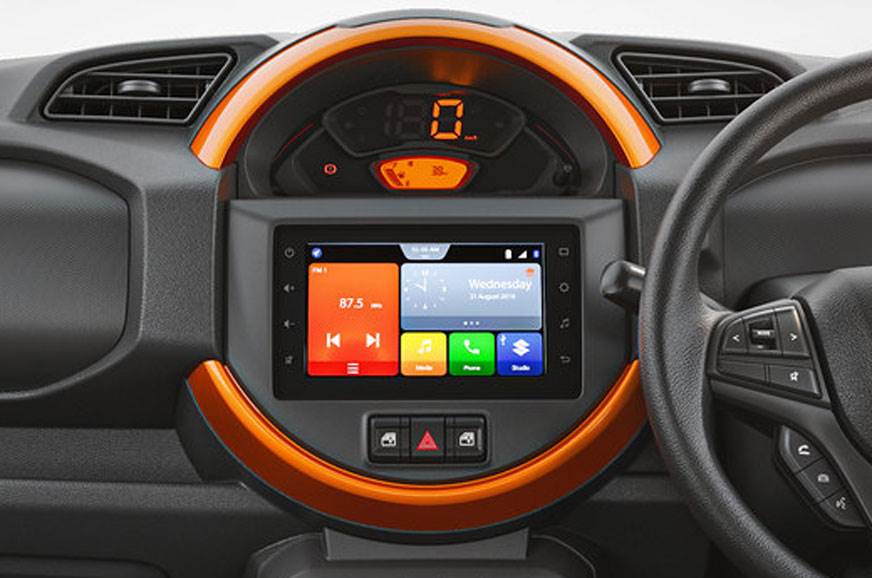 Power to the people

As before, the Kwid is on offer with 0.8-litre and 1.0-litre petrol engines. For this comparison, we’ve considered the larger-hearted of the Kwids – one that’s a direct match for the S-Presso and its only 1.0-litre unit. Suzuki and Renault’s three-cylinder, naturally aspirated engines that produce the exact same 68hp of power are near identical in max torque too (90Nm on the S-Presso vs 91Nm on the Kwid), and they have to propel similar mass (763kg vs 755kg) as well. Unsurprisingly, our performance tests revealed only small differences in acceleration and roll-on timings, with the S-Presso being quicker to the ton and from 40-100kph in fourth gear, and the Kwid being faster from 20-80kph in third. What the numbers fail to convey is how different the two cars feel to drive. 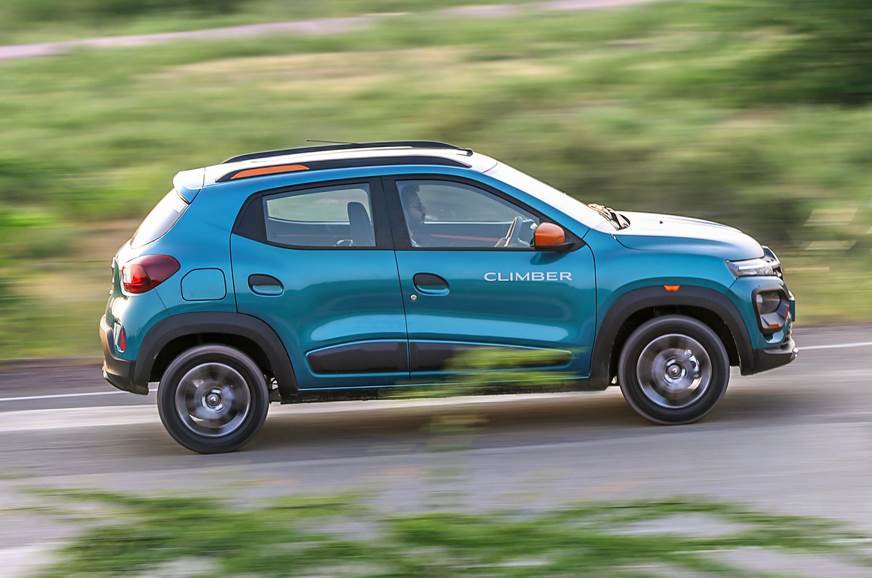 The S-Presso’s BS6-compliant K10 engine is surprisingly tractable but an aggressive fuel tip-in and tip-out mean power delivery isn’t absolutely crisp in typical low-speed driving situations. What makes the engine likeable is its refinement. It is free from undue vibes, runs quiet and only gets vocal when revved hard. The light clutch and smooth-shifting gearbox only enhance the experience. 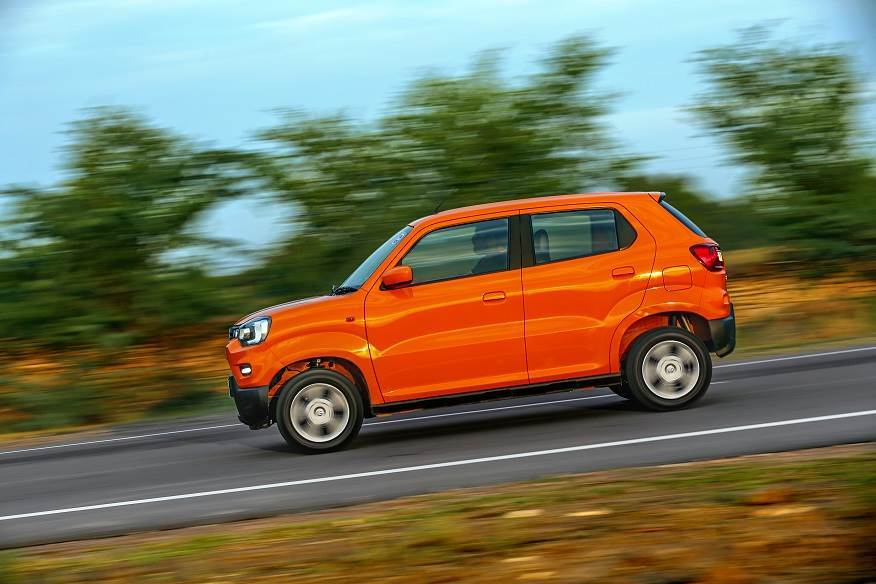 After a go in the S-Presso, you’ll find that the Kwid’s powertrain isn’t as sorted. The engine is noticeably noisier to begin with, and low-speed power delivery isn’t slick here either. Also, you’ll find that you have to work the Kwid’s gearbox more in town. Build the revs, though, and you’ll appreciate the Renault engine’s responsiveness and zesty nature. The trade-off is that you have to contend with a lot more noise from the Kwid’s engine bay. Perhaps the inevitable upgrade to BS6-spec will make the engine a smoother and quieter unit. 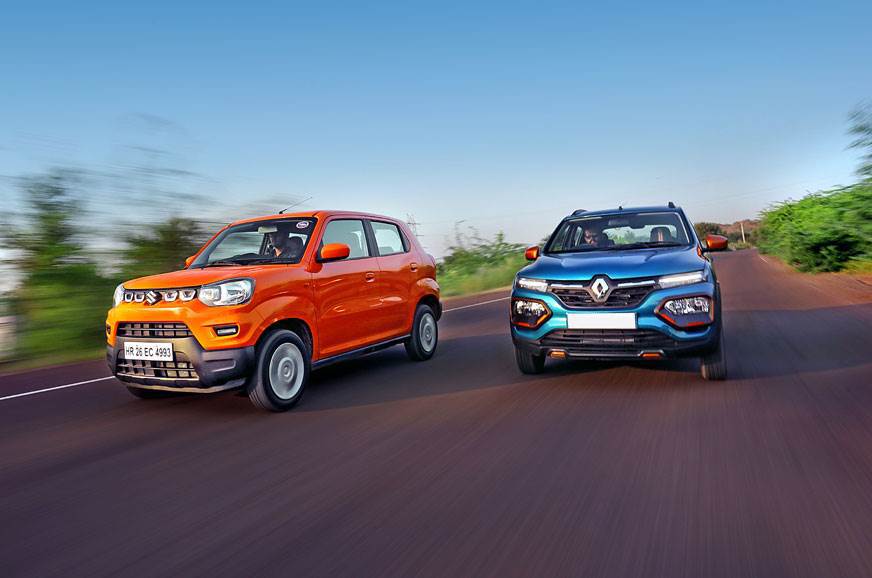 We are yet to do a full fuel economy run but both models do boast an identical ARAI-rated economy of 21.7kpl. Interestingly, the updated Kwid 1.0’s official fuel economy figure is down on the earlier car’s 23.01kpl. This is down to the switch to chunkier tyres and the 35kg increase in weight (a result of added structural reinforcements).

The compact dimensions and easy-to-twirl steerings make the S-Presso and Kwid really friendly to punt around town. The Maruti does have the tighter turning radius, and is also the one with the more absorbent ride at low speeds, while the switch to larger wheels has cost the Kwid some of its pliancy over bumps. You also hear more of the suspension in the Kwid.

The lower-slung Kwid does feel more sure-footed at highway speeds. There's less vertical movement and you get a greater feeling of confidence in the corners, even if the steering is devoid of any feel. The S-Presso moves around that little bit more at high speeds but straight-line stability is actually better than what you'd expect from a tall car. There is reasonable weight at the steering too but quick changes in direction catch the S-Presso out.

The Kwid has long been our favourite budget hatchback and the updated model only builds on the original's strengths. Were this a contest on looks alone, the striking 2019 Kwid would have walked away with it. However, if you see the two cars in their entirety, it's the S-Presso that comes across as the more rounded product. It is far more spacious, is better finished on the inside, has the quieter engine and is generally a nicer car to drive. It lacks some of the frills that you get on the Kwid but, given a choice, the S-Presso would be the car we'd go for. If only it wasn't such an odd looker.