We list out five things you need to know about the new Yamaha YZF-R15 V3.0. 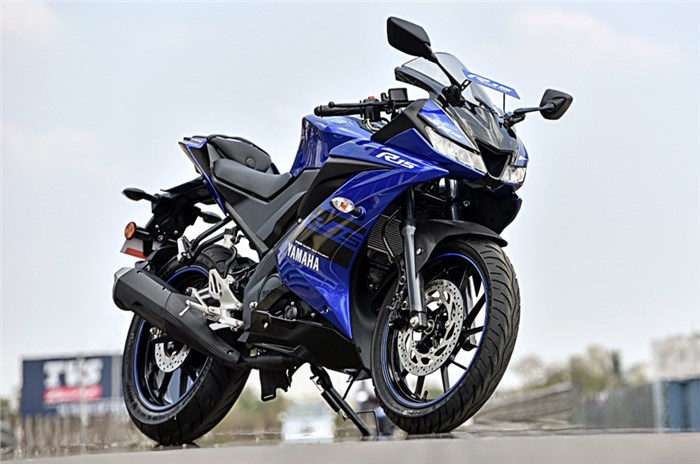 Styling and features
Like all other generations of the R15, this third-gen model is clearly at the receiving end of R1/R6-inspired bodywork. The new design has introduced sharp-looking twin-eye LED headlights with a faux air duct housed between them. The motorcycle also has a well-integrated bubble visor. For the first time, the R15 receives an all-digital instrument cluster which is horizontally laid out (with a white backlight as well as a shift-light in the same shade) and is informative but not overly-complicated. Overall, the R15 V3.0 looks stunning and has a design that will pull buyers in. Further R1 styling inspiration can be seen on the tank with similar ‘gills’ and in the tail-section, where it has similar aerodynamic scoops. The R15 finally looks proportionate and the pillion seat is also lower now, but it is still in a very sporty position.

It is available in two two-tone colours – black on blue and gloss red on matte grey. Also new is a slip-and-assist clutch, making the R15 V3.0 the first 150cc motorcycle in India to offer this feature. As a result, you get a clutch lever that’s light in operation and a rear wheel that’s no longer interested in hopping under hard downshifting. The bike packs new levels of technology for a 150cc. However, the quality and finish on this bike is not as good as the previous generation models.

Mechanicals
The 155cc, liquid-cooled, SOHC, four-valve motor now has a 1mm larger bore, a new intake and exhaust system and also sports Variable Valve Actuation (VVA). The VVA system essentially employs a solenoid coil-based valve operation mechanism that utilises low-cam and high-cam intake rocker arms. This has an appreciable impact on its performance at either end of its rev range. The VVA also helps the engine feel meaty, even when it's well past 8,000rpm. Not to mention that the motor now produces an impressive 19.3hp at 10,000rpm and 15Nm of torque at 6,500rpm while being paired to a six-speed gearbox.

Accessories
Yamaha offers a number of accessories for the YZF-R15, like a seat cover and a tank pad, as well as a skid plate to safeguard the exhaust while going over speed bumps. We particularly like the frame sliders that have been neatly integrated into the fairing. Yamaha also offers a USB connector for your phone. As part of the racing kit, you can choose a Metzeler tyre for the rear and surprisingly, Yamaha says it’s only for track use. Metzeler rubber, however, isn't offered at the front and one has to make do with the MRF. The rear tyre is the Metzeler Sportec M5 140/70 R17. The Japanese two-wheeler giant also offers a Daytona muffler, which again, is for track use. Most accessories are well priced but the Metzeler tyre seems expensive and we’ve found the same size for nearly half the price on Amazon. Click here to check the pricing and get more details on these accessories.

Track-focused
The new R15 is more track-focused than the V2.0, in almost every way. To begin with, it has a more committed riding position – the handlebar is lower, the seat is 15mm taller (at 815mm) and the foot pegs are further back. The bike also has a sharper rake which results in an aggressive turn-in. Further enhancing its track capabilities is the fatter (than before) 41mm telescopic fork and a higher ground clearance of 170mm (10mm more that before). When we rode it at the track, we found it feeling more compact and immediate, despite having a higher kerb weight (139 kg; 3kg heavier than the V2.0). This is also a result of having a shorter wheelbase (1,325mm – 20mm lesser) and a decreased trail (88mm, as opposed to 98mm). The bike is now faster and a very good handler, but deserves better tyres. Yamaha has also equipped the V3.0 with a larger front disc at 282mm, but it continues to miss out on ABS.

Competition check
Ever since its debut in 2008, the R15 didn’t have any direct rivals; except for Honda’s CBR 150R, which has now been discontinued. At Rs 1.25 lakh (ex-showroom, Delhi) it is the only fully-faired track-focused 150cc bike in its segment. The only real competition it faces is from the non-ABS Bajaj Pulsar RS200, which is priced at Rs 1.24 lakh (ex-showroom, Delhi).