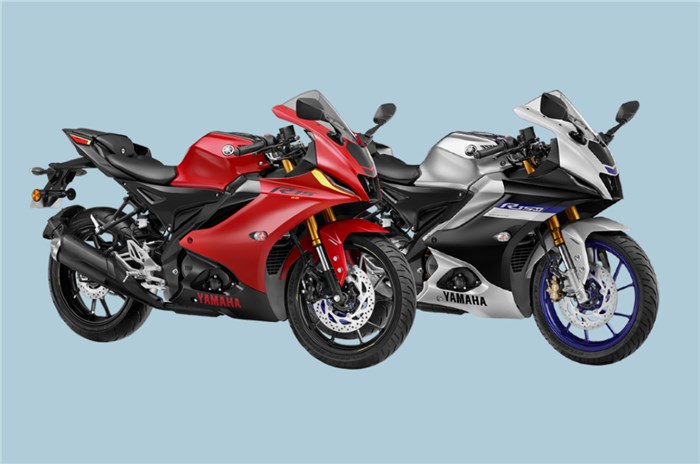 The latest-generation Yamaha R15 takes things to the next level with a big update to the electronics, design and more.

After all the years of being on the back foot as compared to the international model, the India-spec R15 finally gets not only impressive but segment-first features. It’s now available in two variants- the standard R15 V4 and the R15M. Here are five things you must know about it.

For the first time, the India-spec R15 gets equipped with a 37mm USD fork. Suspension at the rear continues to be carried out by a preload-adjustable monoshock. Yamaha has also changed the upper triple clamp that’s designed to accommodate the new fork. Other changes to the chassis include a reinforced subframe that’s said to have improved overall balance. Despite these changes, the wheelbase, at 1,325mm, remains the same as the V3.

The updated styling looks rather striking and aggressive. The headlight has taken refuge inside the forward-facing air-intake, just like on the YZF-R7, and overall, the new R15 sports a sharp and aerodynamic appearance. Yamaha claims that it not only looks sharper, but actually cuts through the air more efficiently.

Another first for not only the R15, but any motorcycle below the Rs 2-lakh mark is switchable traction control and a quickshifter (up only). While traction control is available as standard across the range, the quickshifter is optional on the more-affordable models- the Racing Blue coloured R15, R15M and MotoGP Edition get it for no extra cost.

Facing the rider is a new LCD display that features Bluetooth connectivity. It displays everything the older bike did as well as SMS and email, call and phone battery level notifications. However, it won’t read out the messages or alert you about the incoming caller like some other more advanced systems. It also misses out on the navigation function. That said, the display does have some unique features like it’s two display modes: Street and Track.

Comes at a price

As one would expect, these changes have resulted in a significant increase in prices. The standard R15 V4 now ranges from Rs 1.68-1.73 lakh, while the R15M (Rs 1.78 lakh) and R15 MotoGP Edition (Rs 1.80 lakh) cost a fair bit more. That’s about Rs 10,000 more than the previous model, in addition to the numerous price hikes the bike has received in the past two years.