Eyeing a sporty 200cc commuter bike? Bajaj and TVS both claim to have your answer, which is where Rishad Cooper steps in to help you pick. 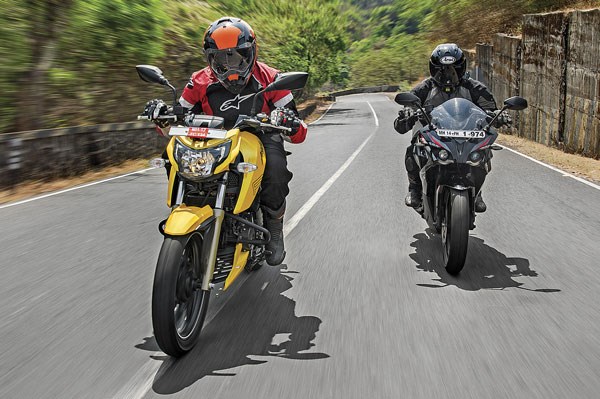 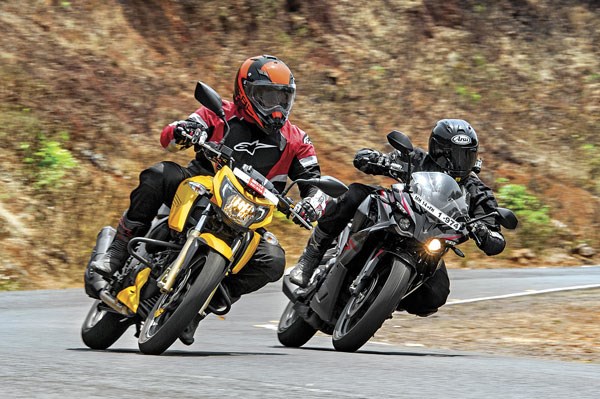 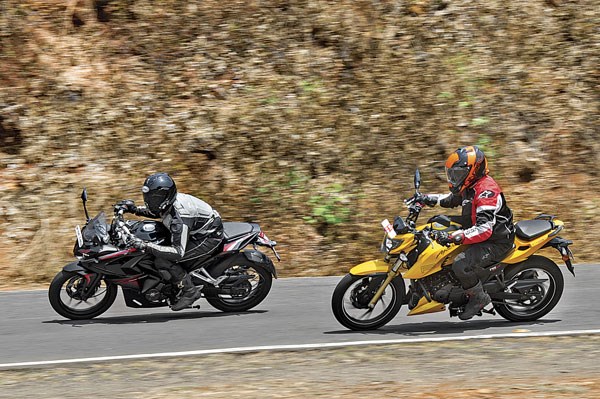 Sporty Apache the lighter, quicker-handling bike, while forgiving Pulsar just as able in the twisties. 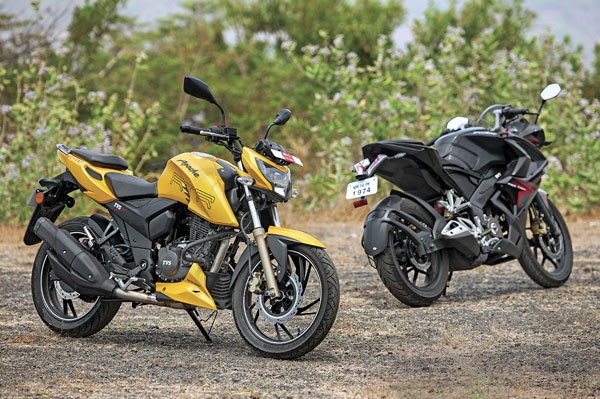 Apache RTR, the more handsomely styled 200 of this duo, where Pulsar RS makes you think Bajaj has tried too hard.

The two 200s in this test strive to achieve similar ends, but are quite different in the way they go about doing that. The TVS Apache RTR 200 and Bajaj Pulsar RS 200 sit at the very creamy edge of the entry-level sports bike range, where sportiness and everyday practicality do still go hand-in-hand. Past this point, segment focus leans noticeably towards performance and dynamics, while everyday needs shift closer to the pillion seat.

Bajaj’s Pulsar 200 NS has been out of showrooms for some time, which has given the more recent AS family some breathing space. So, the fuel-injected RTR 200 must inevitably square-off against the Pulsar RS 200, despite both approaching their intended riders with different pitches. The RTR boasts track-bred TVS genes, while the RS is proud of its Bajaj street focus, which isn’t to say these bikes can’t hold their own around a race track.

Picking one winner calls upon plenty of head scratching and close scrutiny.

Stood next to each other, it is immediately apparent that these two motorcycles have different upbringings. The Pulsar glowers, and carries a chip on its shoulder, perhaps in some measure due to its deep-set projector lamps that stare balefully out of a heavily sculpted fairing, which is missing on the Apache. The RS 200’s panels look overdone, with different layers and graphics and then there’s that tail-lamp, which is, well, quite unconventional to say the least. There’s no denying that the RS 200 can turn heads, but you should know not all the glances will be admiring. As expected, the Pulsar features a fair bit of Bajaj trademark kit like back-lit switches and a blue back-lit instrument console. One grouse though, could be its lack of a gear position indicator. 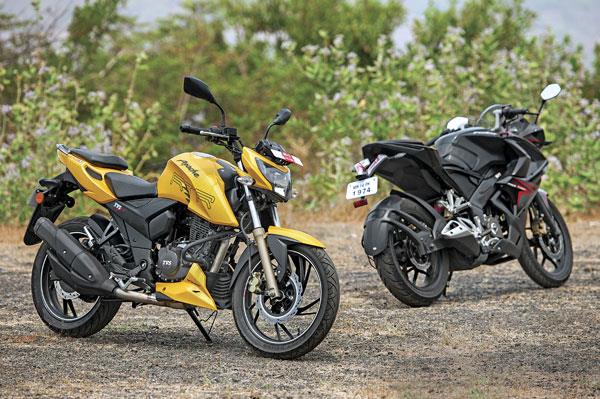 Apache RTR, the more handsomely styled 200 of this duo, where Pulsar RS makes you think Bajaj has tried too hard.

The RTR 200 isn’t any pushover either. The cut of its headlamp and the DRLs that flank the always-on pilot-lamp grab attention. There’s a swarthy feel granted by the TVS bike’s massive tank, exaggerated by extensions that jut out of both sides. But, neat touches like a beautiful matte- yellow paint finish, an offset fuel filler cap, smartly buffed levers and a chunky gear-like bezel for the combi-lock, all reek of class. The white back-lit instrument cluster is easy on the eye just as on the RS 200, and feature-packed. It has modes to record acceleration times, maximum top speed and even your lap times.

Both the RTR 200 and RS 200 come with good overall quality, fit-and-finish as well as top-drawer attention-to-detail.

The 200cc segment is where these bikes have to strike a fine balance in India! You’re wading some way out into performance bike space here, so acceleration and top speed are key, yet buyers also expect a measure of practicality with an eye still on fuel efficiency. Riding them proves the RTR 200 and Pulsar RS 200 do both deliver good efficiency for the class, also offering flexible enough natures to allow comfortable everyday commuting. So, which does it better?

Fire their four-stroke and single-cylinders up, and both four-valve engines quickly settle into smooth idles. The RTR 200 exhaust emits a throatier, more exciting and sporty tone compared to the softer purring RS 200. The TVS runs a counter-balanced 197.8cc air and oil-cooled motor that is good for 20.5hp at 8,500rpm, some horses behind the liquid-cooled 199.5cc Pulsar’s 24.4hp at 9,750rpm. The RTR 200 provides the option of fuel injection, which is stock on the RS 200 that also deploys triple spark-plug tech. 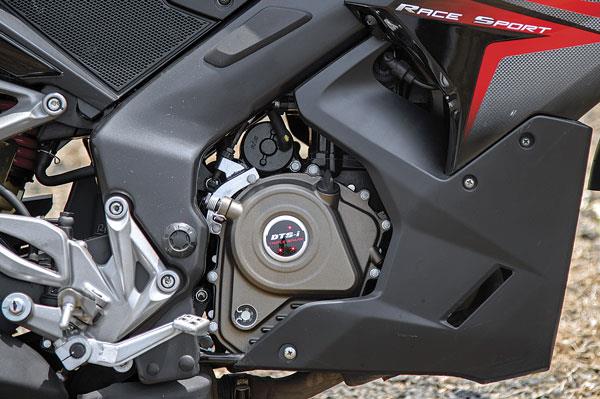 Both motorcycles enjoy smooth-shifting gearboxes that work in the one-down, rest-up pattern. Clutch action is likewise flawless and well weighted on the pair, and proved a boon when riding through traffic. Gear ratios are well spaced and thought out on this duo, the RTR offering a gear less than the six-speed RS.

TVS has completely ironed out the fuelling glitches we had observed earlier when riding pre-production RTR 200 variants and the powerband is wide, just as on the RS 200. Both motorcycles provide quick throttle response, and do well to deliver the bulk of their performance in their low- to mid-range.

While both capable engines come with good refinement on the menu, the RS 200 steals an edge, with a noticeably smoother feel, and less vibes, specially as the revs climb. The Pulsar also wins brownie points with more potent acceleration, felt most in the mid-range where the higher power output is most apparent, feeding in with stronger urgency as you open up the throttle to stream out of corners. 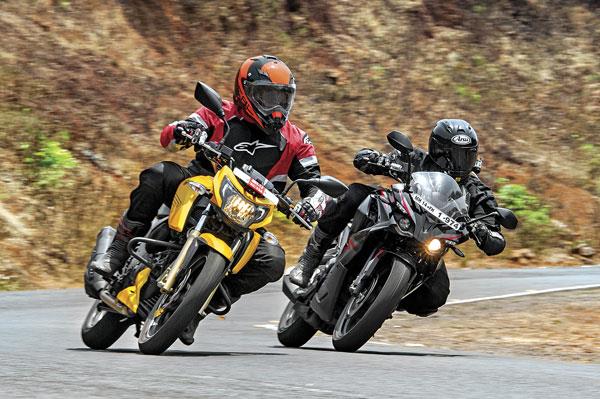 This is reflected in our acceleration tests, where the RTR 200 got past 60kph from rest in 4 seconds, a bit after the RS 200 had gone by in 3.76 secs. The gap widened at 100kph, managed by the Apache in 10.73s, where the Pulsar came in a second earlier at 9.71s. It’s a similar story when talking top speeds, where the RTR 200 peaks out at 128kph and the Pulsar RS 200 runs all the way up to 137kph before calling it a day. And, at full clip, you start to really appreciate the RS’ fairing, finding yourself exposed to more wind blast on the RTR.

Both the Apache and Pulsar offer comfortable, reasonably upright riding positions and well-padded riding saddles. You’re good to go in terms of daily commuting, while still getting a slightly sporty feel from both bikes that won’t make you feel out of place even at a track day. The much lighter RTR 200 is held together with a dual-cradle steel frame, where the more portly RS 200 brings into play a perimeter steel frame. Suspension is a constant, with telescopic forks up front and monoshocks at the rear, non-adjustable on the TVS.

Ride quality is good on both 200s, a tad firmer on the lighter RTR, which feels good when attacking the twisties, while the RS feels plusher covering rough tarmac at low speed. Both bikes steer with neutral feel and track well through corners, the RTR 200 doing well to feel lighter in the front, more effortless than the RS 200, with quicker turn-in. When riding really hard on fast-flowing corners, both Indian 200s excel and feel planted, the RS 200 slightly more stable, forgiving and offering you a slightly wider comfort zone. 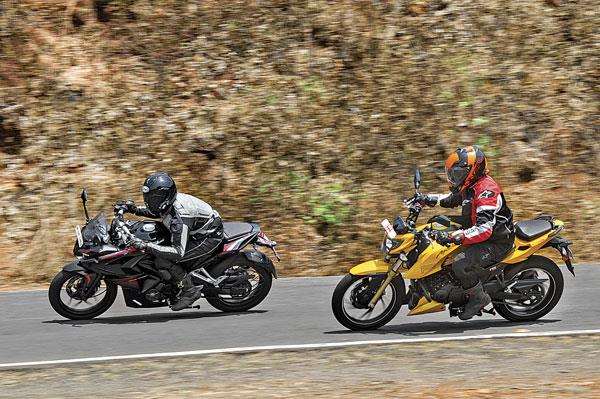 Sporty Apache the lighter, quicker-handling bike, while forgiving Pulsar just as able in the twisties.

The top-of-the-line RTR 200 offers Pirelli tyres we strongly recommend, where the RS 200 comes with tailor-made MRF soft compound rubber. Grip is tenacious on both bikes that ride on 17-inch rims, even when pushing the limits, with neither able to steal a significant march on the other. Likewise, the brakes work well all round, with good bite and feedback at control levers. Both 200s offer single-rotor, petal-type discs front and rear. TVS is soon to provide the RTR 200 with an ABS option, while Bajaj already has a single channel Bosch system working in front. The Apache comes with a nice safety enhancing feature that works well, called RLP, or rear lift-off protection; relieving front brake pressure whenever your rear wheel starts lifting under hard braking.

Few manufacturers make bad motorcycles in modern India, and Bajaj and TVS certainly don’t go against this grain by any yardstick. So, it isn’t surprising bike comparison tests can sometimes go down to the wire, like this.

You can’t go wrong on either the Apache RTR 200 or Pulsar RS 200, both of which make really competent motorcycles, representing the pinnacle of their segment. Push us to the wall to make a choice, however, and we pick the Pulsar, for despite costing a premium over its rival, this makes the better rounded bike of choice in urban India. The added value of a fairing on the Pulsar, with more refinement and significantly quicker performance, while still drawing level with the Apache across most other parameters, including smart handling, nails it for the Bajaj. The Pulsar RS 200 is the bike we’d pick over its very able rival. 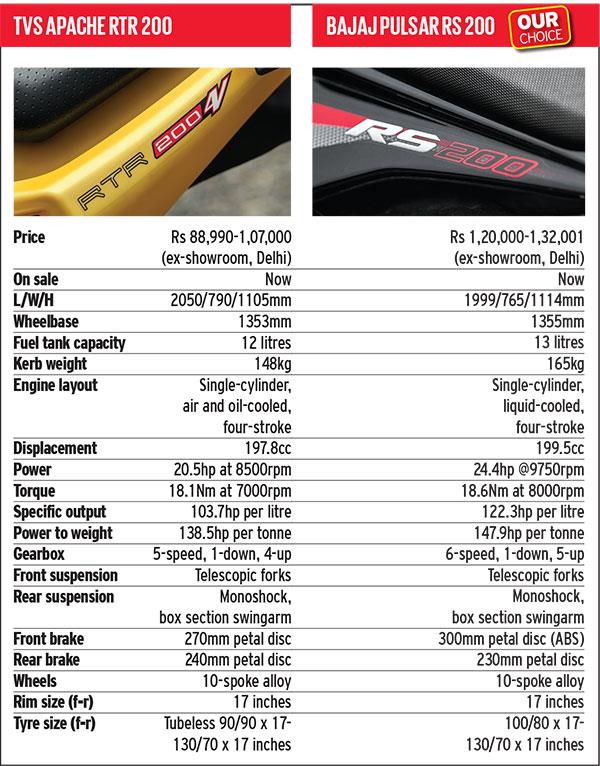