Based on the new Bonneville Street Twin, the off-road capable bike should be priced between Rs 8-8.5 lakh. 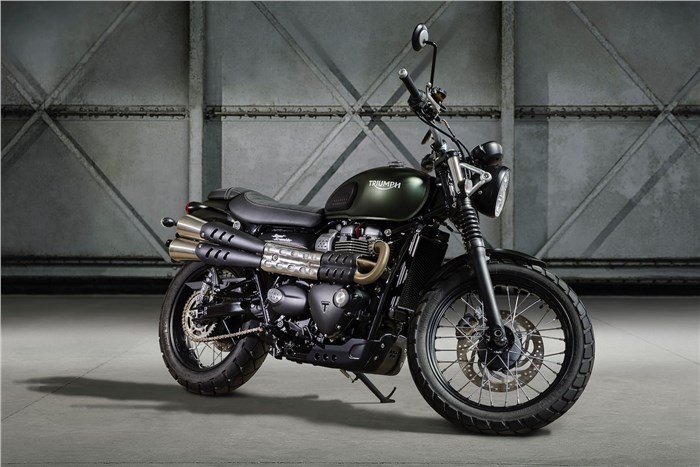 Originally shown off at the 2016 EICMA show in Milan, the Triumph Street Scrambler is all set to make its Indian debut shortly. This off-road capable motorcycle is built around the baby of the new Bonneville range, the Street Twin. Triumph had a Scrambler based on the last-generation Bonneville as well, however, that bike never made its way to our shores. Considering the growing interest in riding off the beaten path in the country, Triumph India has finally seen it fit to bring over this latest Scrambler.

The Street Scrambler gets the same 900cc ‘High Torque’ parallel-twin engine from the Street Twin that's good for 55hp of peak power and 80Nm of peak torque. The air- and water-cooled motor maintains all the characteristics from the road bike, including its ride by wire throttle and switchable traction control. However, Triumph says that the power delivery characteristics have been altered to deliver more bottom-end grunt.

The five-speed gearbox with its torque assist clutch is carried over as well. What has really changed is the chassis, which is now reinforced to cope with the rigours of riding off-road. Also, the rear shocks are now longer, offering more wheel travel. And one other important distinction is that the ABS on the uprated brakes is now switchable in order to have the option of locking the rear wheel when riding on dirt.

The bike also comes with slightly taller and wider handlebars for an improved off-roading stance. A new split seat has been specifically designed for the Scrambler which has a removable pillion section that reveals a rack for mounting small luggage or a toolbox. The 17-inch alloy wheels have been dropped in favour of the 19-inch front and 17-inch rear wire-spoke wheels, shod with on- and off-road Metzeler Tourance tyres. Of course, what Scrambler would be complete without its high-mounted side exhaust? And the mufflers on this bike are absolutely delectable. A metal bash plate under the engine rounds out the bike's rugged look.

With a fair bit of off-road kit, the Triumph Street Scrambler should compete with the Ducati Scrambler Desert Sled, rather than the base Scrambler. However, we have a sneaking suspicion that the Ducati might be the more capable motorcycle of the two, but we will reserve our judgements for a proper comparison test. But we do think the Triumph will enjoy a price advantage as we expect it to be priced at about Rs 8-8.5 lakh, whereas the Desert Sled comes in at Rs 9.38 lakh (ex-showroom, India).