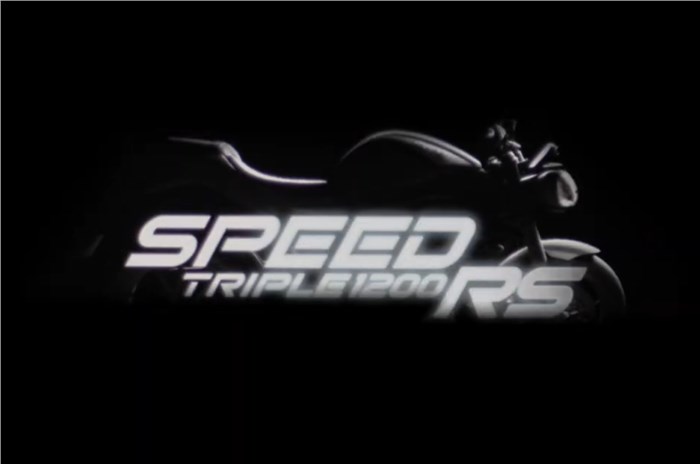 Triumph may launch the Speed Triple 1200 RS in India.

Triumph Motorcycles have released a teaser video of the new Speed Triple 1200 RS. The new Triumph street-naked motorcycle is all set to be unveiled on January 26, 2021.

The teaser video barely gives a glimpse of the bike, but what's clearly visible is the new twin-headlamp setup, replete with the angry DRL eyebrows. In fact, the new LED headlamps look similar to the ones on the Street Triple R/RS that were updated in 2019.

The Speed Triple 1200 RS also gets a carbon fibre mudguard and gold USD forks (possibly Ohlins), which should be fully-adjustable. Expect the rear monoshock to offer spring preload and damping adjustability as well.

Triumph has been quite tight-lipped about the details of the Speed Triple 1200 RS, and we will only get to know about the power and torque figures on January 26.

However, considering the 1200 moniker, we expect the motorcycle to feature a larger engine than the one in the Speed Triple 1050 RS. A bump in engine displacement should also mean more power and torque. For reference, the three-cylinder engine in the 1050 produces 150hp at 10,500rpm and 117Nm at 7,150rpm.

As far as electronics are concerned, the Speed Triple 1200 RS is expected to feature the latest generation. And as with most modern day Triumphs, the TFT display should feature Bluetooth connectivity, navigation and Go Pro controls.

Details about the frame, suspension and brakes are yet to be revealed, however, going by the level of kit on the Speed Triple 1050 RS, expect similar or better components on the new 1200 RS.