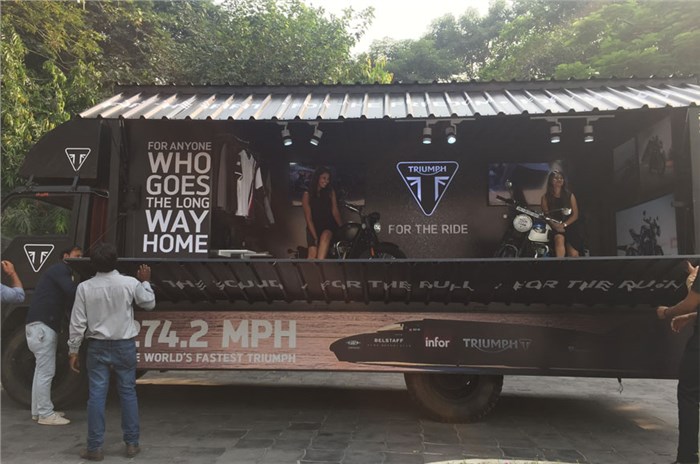 Triumph has inaugurated its first mobile dealership concept in a bid to tap into demand for premium motorcycles from semi-urban locations in India.

The British brand recently launched its Street Triple RS at Rs 10.55 lakh and also flagged off its mobile showroom, both of which are expected to capitalise on the ongoing festive season.

The mobile dealership, which has the entire India range of Triumph motorcycles, is scheduled to begin its first leg in northern India, covering key Tier-II and Tier-III cities. Smaller cities and towns, which do not have an official Triumph showroom, are expected to be toured by the mobile dealership as well. Triumph currently has a dealership network of 14, and is set to expand to 17 showrooms by the end of 2017.

According to Vimal Sumbly, managing director, Triumph Motorcycles India, “With the market having recovered from the adversities of demonitisation and better disposable incomes on account of 7th Pay Commission and on the back of a generally good monsoon, the company is looking to fulfil the dreams of the enthusiasts in the smaller towns, who yearn for a rounded premium motorcycle experience, along with premium merchandise, where Triumph, aims to introduce more technical apparel to suit the rider’s need.”

The premium motorcycle manufacturer has been quite successful in India, registering a 27 percent year-on-year growth for the second quarter of FY2018. Triumph sold 632 units between April and September 2017, while also moving 4,500 units in India since its entry into the country in 2013.

“We will be releasing a concrete schedule and specific coordinates where the van would be stationed and prospective customers and enthusiasts in these towns could then experience and book their bikes through these dealerships”, he added.