Prices have been lowered by upto Rs 2.2 lakh, in line with the recent custom duty reductions. 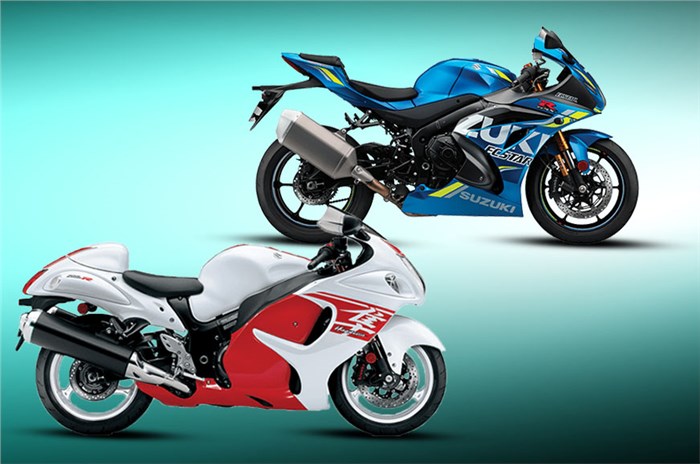 Suzuki has announced revised prices for two of its big bikes – the GSX-R1000R and the Hayabusa. The new price for the range-topping GSX-R1000R has dropped from Rs 22 lakh to Rs 19.8 lakh. Suzuki’s popular Hayabusa has also seen a small reduction from Rs 13.87 lakh to Rs 13.59 lakh (all prices, ex-showroom, Delhi). This price drop comes thanks to the recently announced 25 percent drop in CBU custom duties. Suzuki's revised prices for its other big bikes like the GSX-S1000F, GSX-S1000, GSX-R1000 and the V-Strom 1000 are yet to be revealed.

In case you were wondering how the Hayabusa price has also dropped (considering that it is a CKD) here’s how. The increase in CKD import duties from 10 percent to 15 percent, announced at the 2018 budget, applies to motorcycles where the kits have been imported with the engine and gearbox as separate units. Interestingly, when the surprise CBU tax rate reduction was announced on February 12, 2018, it also made mention of the reduction in import duties levied on motorcycles kits with engines and gearboxes pre-assembled. This rate, which used to be 30 percent, has now been reduced to 25 percent. This helped in the small price reduction for the Hayabusa. See here for more clarity on how these tax rate reductions have affected the final price of imported motorcycles.

Suzuki launched the new GSX-R1000 and the GSX-R1000R in India in May 2017 at Rs 19 lakh and Rs 22 lakh (both prices, ex-showroom Delhi). These bikes came equipped with an all-new frame that was 20mm narrower and 10 percent lighter than its predecessor. This has kept the kerb weight of the bike down to 202kg for the standard GSX-R1000 while the GSX-R1000R tips the scales at 203kg. The bikes also came with a new 1,000cc inline-four motor that makes 202hp and 117.6Nm of torque. Additionally, the top-spec GSX-R1000R comes fitted with lean angle-sensitive ABS, bi-directional quick shifter, launch control, LED position lights, lightweight upper yoke and lightweight battery. This new revision means you can have all of this for a price that is very close to the original price of the standard GSX-R1000.

Suzuki also launched the 2018 Hayabusa in India just a couple of months, earlier. With this update, the bike gained two new colour schemes – Pearl Mira Red/Pearl Glacier White and Glass Sparkle Black. This aside, the motorcycle remained largely unchanged. It continues to be powered by the same in-line, four-cylinder, 1,340cc fuel-injected, liquid-cooled DOHC engine that develops 199.7hp and 155Nm of peak torque. The only direct competition the Hayabusa currently faces is from the Kawasaki Ninja ZX-14R that has an unchanged price of Rs 19.7 lakh (ex-showroom, Delhi). Kawasaki is one of the few manufacturers which has yet to reveal its updated price tags.