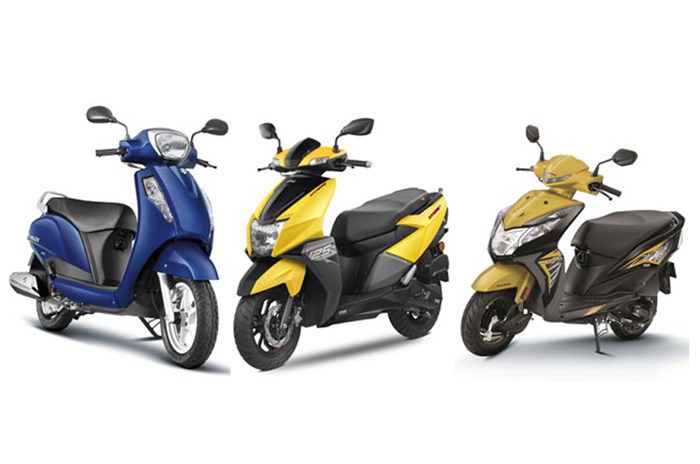 SIAM data has reported total domestic scooter sales at 666,476 units for September 2018 and a sale of 3,757,103 units for the April-September period. The 4.91 percent growth for the Apr-Sept period is a clear indication of a slowing down of fortunes for the segment, which clocked a 17.26 percent growth in the same period last year.

The slowdown can be primarily attributed to the incidence of floods in Kerala, a key market for scooters. The displacement of people from affected areas, and the understandably subdued Onam festivities were certainly unavoidable circumstances, and the local market is yet to recover completely. Another strong (and rational) reason for the declining growth is the advisory issued by West Bengal RTOs which no longer allows non-licence holders to buy two-wheelers. The result is a collapse in local demand by 50 percent.  Heavily discounted retail prices of entry-level motorcycles, prominently the Bajaj CT100, also impacted scooter sales given how it drew price-sensitive customers to the showrooms, particularly in Uttar Pradesh, Madhya Pradesh, Bihar, Rajasthan and some other states.

Lastly, exceptionally high fuel prices and rising interest rates (on bank loan repayments) are also keeping deterring customers at large in the Tier 1 and 2 and smaller towns from making their purchases in general, thereby evidently impacting scooter sales more than the 100cc motorcycles.

A few scooter models – both new and old – continue to drive sales mostly in urban India. This includes models such as the new TVS NTorq 125, Suzuki’s Access 125 and the Honda Dio. Industry data for September 2018 also outlines a rise in the demand for the proven and affordable models such as the Hero Pleasure and TVS Scooty Pep+.

The top two bestsellers, the Honda Activa (284,809 units in Sept ‘18) and the TVS Jupiter (90,738 units) have both reported a decline in growth from the same period last year. The Suzuki Access, at 46,931 units is third in the category while the Honda Dio, at 44,397 units, is fourth.  The Hero MotoCorp Maestro range is the fifth largest, with sales of 37,367 units in September, and the Hero Duet reported dispatches of 23,124 units, registering a growth of 29.69 percent.

The TVS Ntorq 125 continues on its impressive sales run, now ranking seventh in the Top 10 bestselling scooters list,  with the company having dispatched 20,820 units to dealers last month. The Yamaha Fascino continues to hold eighth spot, with reported dispatches of 20,268 units in September.

While TVS Motor Company has reported despatches of 16,846 units of the Pep+, which stands ninth in the list, volumes of the Hero MotoCorp Pleasure, which occupies the tenth spot, are 16,578 units in September 2018. The Yamaha Ray series and the Honda Grazia did not make it to the Top 10 list in this period.