All manufacturers showed a year-on-year growth on the sales charts. 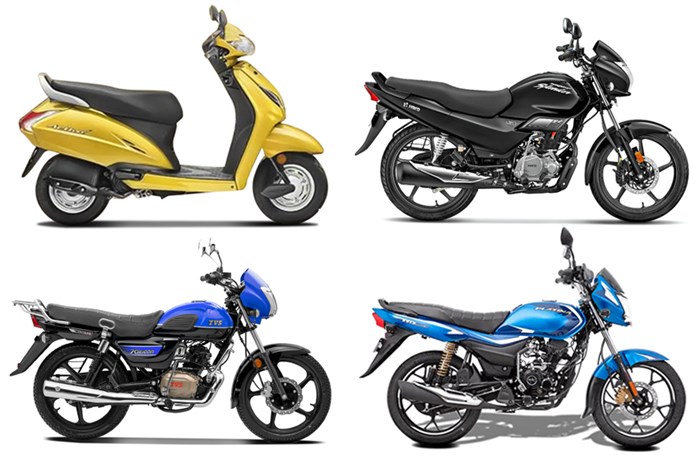 With manufacturers gaining experience in dealing with supply chain challenges, the Indian two-wheeler industry appears to be in good health, with all major manufacturers showing a year-on-year growth in sales. In the case of market leader Hero MotoCorp and Japanese manufacturer Suzuki, the growth is small, less than 1 percent. But in cases like Honda and Royal Enfield, the figure is closer to 20 percent. Here is how each manufacturer performed:

The world’s largest two-wheeler manufacturer retained its position at the top of the sales charts, registering a healthy 4,30,684 units in July 2022. This marks a slight increase from Hero’s July 2021 sales figures, which stood at 4,29,208, but it still isn’t quite as high as what the company managed last month, when it sold 4,63,210 units. Notably, Hero’s export figures for July 2022 are remarkably lower than for the same month last year, and this trend is also observed for the two financial years as a whole. It would seem that the company’s primary focus continues to be very much on its domestic market.

Honda’s two-wheeler arm is displaying rather heartening performance numbers at the moment, and it breached the 4,00,000-unit sales mark last month. The Japanese giant sold 4,02,701 units in July 2022, which represents both a yearly and monthly increase. In the same month last year, Honda only managed 3,40,420 units, which translates to an 18.3 percent increase year-on-year. In June 2022, meanwhile, the company sold 3,55,560 units in India, so here too, Honda has seen an increase of 13.3 percent. It plans to introduce a new premium model to its India line-up in just a few days’ time.

Another manufacturer showing a strong upward trajectory at the moment is TVS, which breached the 2,00,000-units mark, registering sales of 2,01,942 units in July 2022. It was a big month for the Hosur brand, because in addition to growing sales figures, it also launched an important new model – the Ronin. TVS’ numbers for July 2022 are a good 15.3 percent higher than the 1,75,169 units it managed in July last year, and also almost 5 percent higher than the figure it posted last month.

Bajaj’s performance in July draws many parallels to that of TVS. ‘The world’s favourite Indian’ also had an important launch of its own in July, in the form of the Pulsar N160. And it also showed a yearly and monthly increase in its sales figures. With 1,64,384 units sold in July 2022, Bajaj witnessed a near 5 percent growth over the 1,56,232 units it sold in July last year, and also an increase of over 30 percent over the 1,25,083 units it managed in June 2022. As has been the case in recent times, Bajaj’s export numbers were very close to its domestic figures, and it continues to be India’s largest two-wheeler exporter, sending out 1,50,670 units in July.

Suzuki registered 60,892 units in July 2022, meaning that it nearly matched its performance in the same month last year, when it managed 60,589 units. While the year-on-year increase isn’t significant, the Japanese company has seen decent month-on-month growth, managing 52,929 units in June 2022. Recent additions to the brand’s line-up include the V-Strom SX adventure tourer and the Katana litre-class retro naked.

With a periodically refreshed product portfolio, Royal Enfield has been going from strength to strength recently, and it clocked 46,529 units in July 2022. This shows a significant yearly growth of 18.4 percent, as the company registered 39,290 units in the same month last year. July’s figures aren’t quite as high as the 50,265 units that RE managed in June 2022, but with the launch of the eagerly awaited Hunter 350 just around the corner, RE’s sales charts should receive a boost soon.

Evidently, the Indian two-wheeler market seems to be in a rich vein of form at the moment. And with the festive season in their crosshairs, many manufacturers are planning to introduce important new models to cash-in on this lucrative period. It will be interesting to see how the market performs in the coming months.