Paris to Saigon on a couple of Peugeot scooters

Two riders from France, astride two Peugeot Django scooters, embark on a road-trip to relive the journey of two French Naval Officers in 1956. 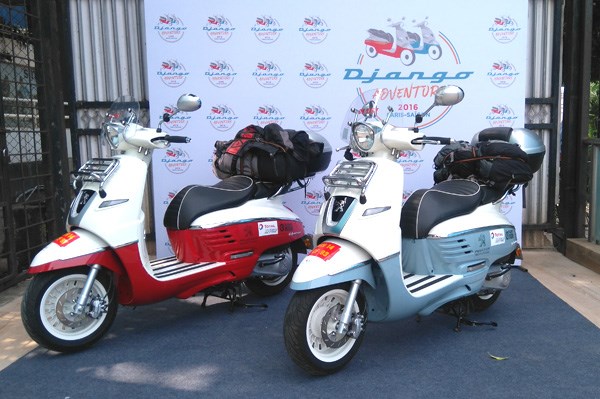 Riders Samuel Felice and Ambroise Prince of France today flagged off the Indian leg of their cross-country adventure from Paris, France to Saigon, Vietnam. They intend to re-create the adventure of two French Naval Petty Officers, Serge Gracium and Michel Vaslin; where the duo rode all the way from Saigon to Paris astride Peugeot S57 scooters in 1956.

Now, 60 years later, the two young riders, Samuel and Ambroise aim to ride in the opposite direction towards Saigon. As logic would dictate, their vehicles of choice are two, 125cc Peugeot Django scooters, which are directly inspired by the S57 of the 1950s.

When asked how the scooters were performing, both riders claimed to have faced no issues until now, except for a clogged air-filter and minor cosmetic damage during transport of the scooters from Istanbul. Since the riders are actually videographers by profession, the scooters are laden with all their camera gear as well as luggage; a back-up vehicle is not present on this ride.

As you can see from the images, the Peugeot Django appears to have immensely comfortable seats that should aid during those longer hours in the saddle. One small niggle – the riders seem to have faced a slight lack of grunt from the 125cc engines while on the high-speed highways of Europe. Then again, someone astride a 400cc motorcycle might face that very same problem on that sort of highway.

The journey started on August 29 and the riders have been on the road since then. Throughout the journey, Samuel and Ambroise have maintained a visual diary to share their incredible journey with the world. This includes a dedicated blog as well as regular updates on popular social media platforms. If you’d be keen on following this adventure of theirs, you can have a look at their YouTube channel – Django Adventure, or their blog – www.django-adventure.com.

The riders have teamed up with Planet Ride as their official partners to make this trip possible. Planet Ride has lent a helping hand with the immense task of logistics and administration, as well as funding 25% of the trip. If you'd like to look them up, you can find their website at www.planet-ride.com/en.