Only 250 F4 RCs will be made worldwide; India gets only one bike, but with race kit that bumps up power from 205hp to 212hp. 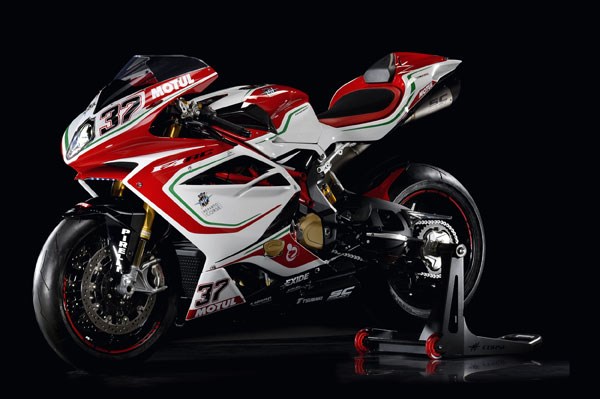 Exotic Italian bike maker, MV Agusta, has added a limited-run variant of its litre-class F4 sports bike – the F4 RC. Only 250 of these bikes will be produced worldwide. Of these, the single bike allotted for India is priced at a whopping Rs 51.91 lakh (ex-showroom, Delhi).

The F4 RC is hand-assembled by a team of specialists to ensure optimisation at the top levels of production. Each motorcycle gets a certificate of authenticity, which makes it unique and exclusive. As a result, the model will hold good value as a collector’s edition.

The F4 RC uses the 998cc, four-cylinder engine from the standard F4 that has been tuned to produce 205hp and 115Nm of torque as against the base bike’s outputs of 195hp and 111Nm. Additionally, the RC comes fitted with a race kit comprising a titanium Termignoni exhaust system and a retuned ECU which bumps up power to 212hp.

With the race kit, the bike weighs just 175kg, making it a whole 16kg lighter than the F4. The weight loss, along with the added power, helps the RC attain a claimed top speed of 302kph, with the F4 maxing out at a claimed 291.2kph.

The R4 RC is a rival to bikes like the Yamaha R1M and Kawasaki ZX-10R, which are powered by about 200hp 1.0-litre, four-cylinder engines.