MV Agusta 950cc ADV motorcycle to be unveiled next year 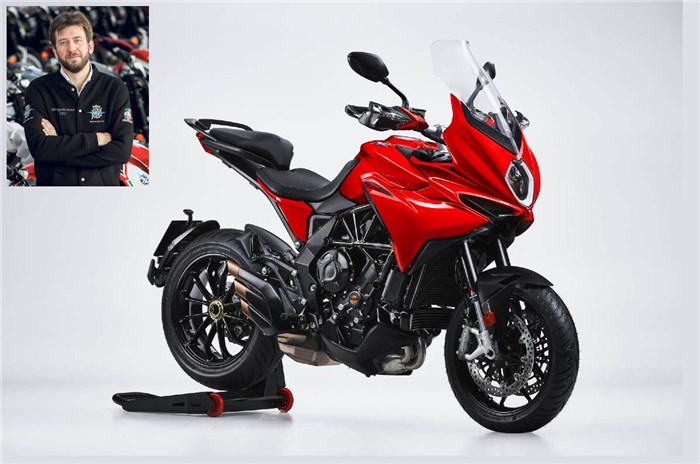 Development work is already underway on the project, including the brand-new engine.

High-end Italian motorcycle manufacturer MV Agusta is working on a new 950cc adventure bike that will be unveiled by end-2022 and go on sale by 2023.

In a recent interview, MV Agusta CEO, Timur Sardarov has revealed that the company’s next all-new model will be a 950cc adventure bike. This model will use an all-new, three-cylinder motor and will be based on a fresh platform that will see the birth of new naked and sport motorcycles.

MV currently produces a range of 800cc three-cylinder bikes, as well as a new range of 1,000cc four-cylinder nakeds. This new 950 platform is expected to sit in between them, both in terms of performance and price.

Sardarov reveals that the motor will be available in two variants, one with lower power and higher torque and the other one being vice versa. The company’s current 800cc triple is also available with varying power outputs, based on the model, ranging from 110hp to 157hp.

Development work for this new range is already underway and Sardarov says the bike will be unveiled by late 2022, with sales beginning in 2023. "It will represent all of the knowledge of MV Agusta and the pinnacle of our engineering capabilities. It will have a lot of smart features in terms of the way the engine performs, delivers power and its torque curve. For us, it’s quite a big milestone. There’s nothing like this available on the market.”

Meanwhile, Sardarov states that the company will launch a new version on the Brutale 1000 platform soon and that the company is also working on other future platforms. One of those is the new 350cc twin-cylinder MV Agustaplatform being developed in partnership with Chinese manufacturer Loncin.

The other is a motor that Sardarov claims takes a very different propulsion approach. In 2018, the then Castiglioni-controlled MV announced that the next-gen F4 superbike could take a completely different approach to propulsion technology and it's likely to be the same bike that Sardarov is talking about here. Whether this will be a full-electric or some form of hybrid is yet to be answered, but what’s clear is that this bike is still a while away.

Under its new ownership, MV Agusta has been doing well, despite the challenges of the recent year. Sardarov states that the company grew by 80 percent from 2019 to 2020 and that it is expected to grow by a further 60 percent this year.