KTM’s Orange Day race was held on March 28th at the Downtown Racing centre this year. 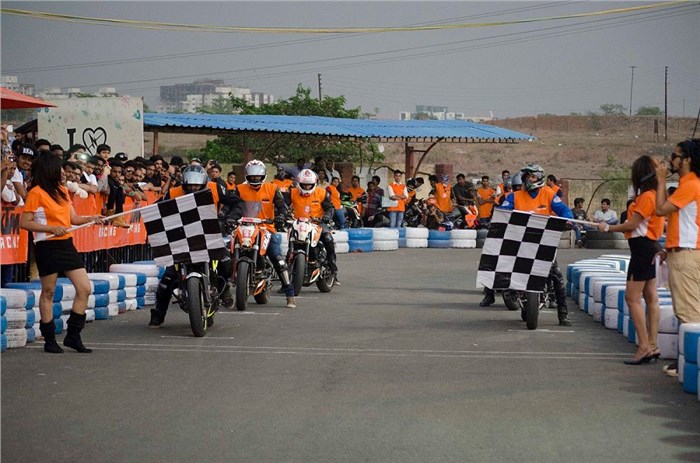 KTM hosted its Indian trademark track race, Orange Day, at the Downtown Racing centre in Kharadi, Pune, on the March 28th this year. This is a single-make, one-day race series that is held in different cities across India by KTM.

For the event, racers were required to register at the track before the race. A brief classroom session followed, informing the racers about the rules, hazards, and the tact to extract the most out of their motorcycles. A demonstration lap is then performed by an experienced track racer, before the races begin.

The Orange Day race is organised for KTM owners to get together and enjoy a track day astride their motorcycles. KTM awards its branded merchandise and power parts to the winners of the race. The bike maker also organised a service camp at the venue along with putting up different stalls for KTM power wear and power parts.

Amit Nandi, KTM’s India Head said, “The ethos of KTM brand is deeply rooted in racing, and we want KTM owners to appreciate the ample thrills that a KTM bike can provide on a race track. The Orange days are conducted in every major city and will keep on growing in scale over the next few months. KTM holds the reputation of being an exclusive premium brand and we are keen to provide the KTM patrons with an experience that is uniquely KTM.”

Orange Day is held across India in various cities such as Delhi, Bangalore, Hyderabad, Kolkata, Chennai, Mumbai and Kochi among others. KTM plans to increase its race day operations soon.