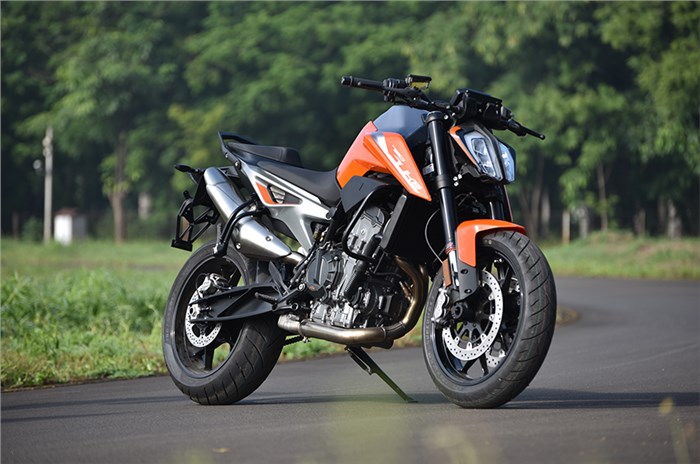 The middleweight sport-naked has been brought here via the CKD route in BS4 spec.

The proof of the Bajaj Auto-owned KTM brand having a strong connect with two-wheeler aficionados is seen in KTM's new flagship model, the 790 Duke, which has already sold 41 units in September 2019. Launched on September 23 at Rs 8.64 lakh (ex-showroom, India), the 790 Duke, for now, is in BS4 spec and only 100 units have been brought in via the CKD route.

It is creditable that despite having launched the middleweight sport-naked motorcycle in India at a price point and power figures that are more than twice that of the company’s other models in the country, the 790 Duke is seeing brisk offtake with consumers.

The 790 Duke is powered by a 799cc, parallel-twin engine that develops 105hp and 86Nm of peak torque. The bike is equipped with a 43mm, non-adjustable USD fork and a pre-load monoshock, both sourced from WP. Other features include a full-TFT display and the most comprehensive electronic safety package in the segment, which includes Bosch Cornering ABS with a disengageable Supermoto mode, lean-angle-sensing traction control, launch control, a bi-directional quickshifter and four riding modes (including a customisable Track mode).

With a dry weight of 169kg in international spec, the sport-naked motorcycle is one of the lightest bikes in its class, second only to the Triumph Street Triple S.

KTM has also initiated plans to upgrade its showrooms in India to accommodate premium models like the 790 Duke and the upcoming 390 Adventure. The showrooms are set to get larger, more premium and are expected to offer a better customer experience.

Meanwhile, India has emerged as KTM’s biggest market worldwide in FY2019. Bajaj Auto, which has 49 percent equity in the Austrian motorcycle maker, plans to further expand the KTM product portfolio in India. 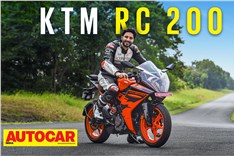