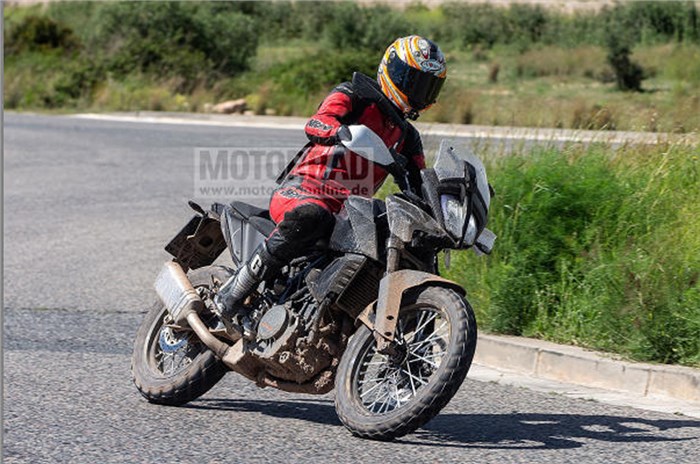 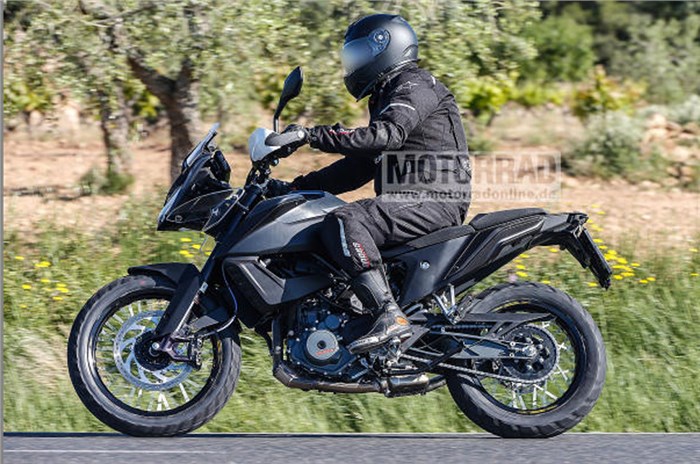 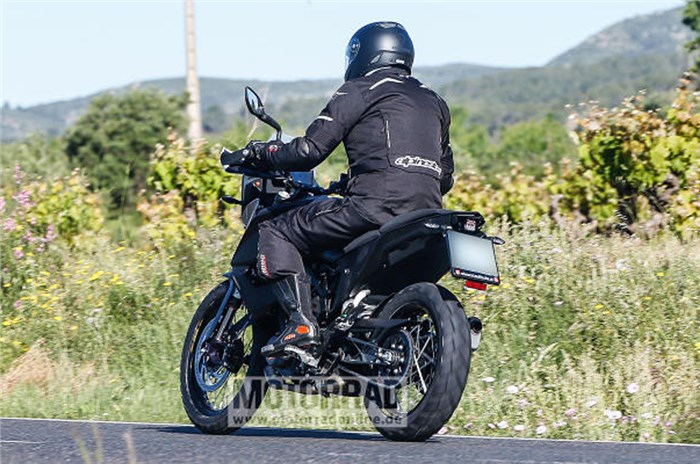 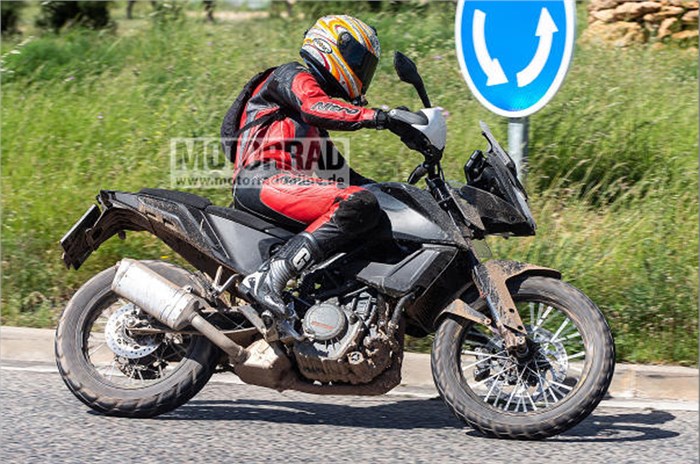 Update: Since we first carried this story, more images of the 390 Adventure prototype have cropped up and they give us a clearer idea of what to expect. First, the bike appears to confirm to the KTM philosophy of light and lean bodywork and there's a good chance that the kerb weight will be on the reasonable side on the road bike.

We now have a much clearer view of the fuel tank area, and the tank extensions are quite different and don't stick out as much as on the 390 Duke. The fuel tank looks different too, but it  doesn't appear dramatically bigger than the one on the Duke and if anything, there may be a rise in capacity by a couple of litres. For reference, the Duke can hold 13.4-litres of fuel while BMW quotes a usable capacity of just 11-litres for the G 310 GS.

We can't help but notice that the bike is running Excel rims, which are an expensive proposition and it would be interesting to see if these make it to the production bike. Meanwhile, the front brake is familiar, but the fork appears to have a longer travel and the fender is a comprehensive unit that covers up the fork seal area, which should keep it clean and safe in dusty conditions. The original image showed that the radiator shroud was bigger, but now its clear that this unit sweeps back all the way to the middle of the trellis frame - this could be for better heat management. 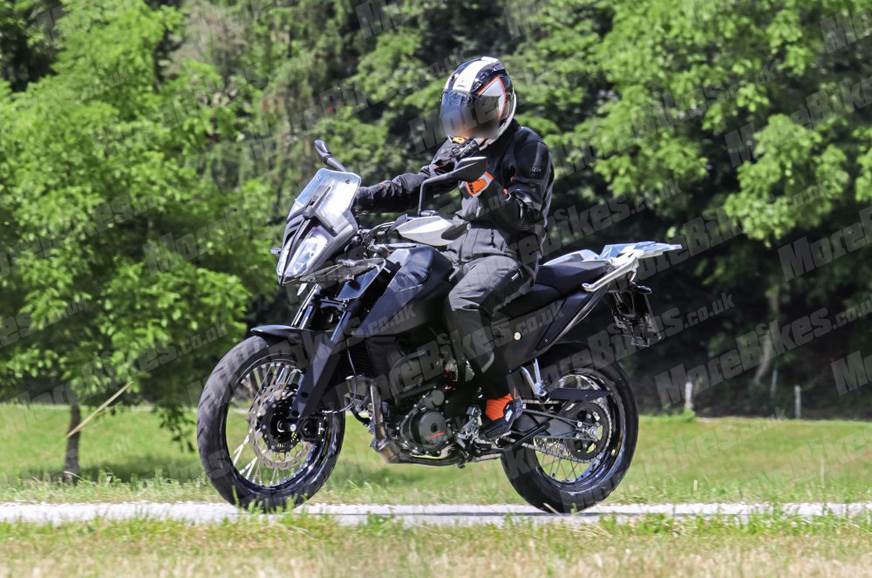 While these photographs give us a good sense of what to expect from the 390 ADV, its worth remembering that these are still test mules and the final product will probably look sharper when it's dressed up in the trademark KTM loud colour schemes.  Yet more pictures have emerged of the KTM 390 Adventure being tested and, this time, it looks very close to being production-ready. The test mule features an LED headlamp, indicators, mirrors and even a rear number plate, hinting at its ready-for-production status.

This prototype is rolling on wire-spoke wheels that appear to measure 19 inches at the front and 17 inches at the rear, in contrast to KTM’s larger Adventure models that feature a 21-/18-inch combo. The early prototype, first spied in 2016, also appeared to be running a 21-inch front wheel. The wheels are wrapped in moderately knobby rubber that should balance road and off-road duties well.

Another element that’s noticeably different from the 390 Duke is the exhaust system. There appears to be a downtube from the cylinder head that feeds into a collector box underneath the swingarm pivot, which then flows into a large side-mounted upswept end-canister.

The headlight looks similar to the unit seen on the 390 Duke, but the surrounding shrouding appears to be different. Above the headlight is a clear screen that may be adjustable. Flanking the headlight on either side are clear panels that help in giving the bike a slimmer-looking profile while providing some level of wind protection. We have seen KTM use this technique to good effect on the RC range as well. 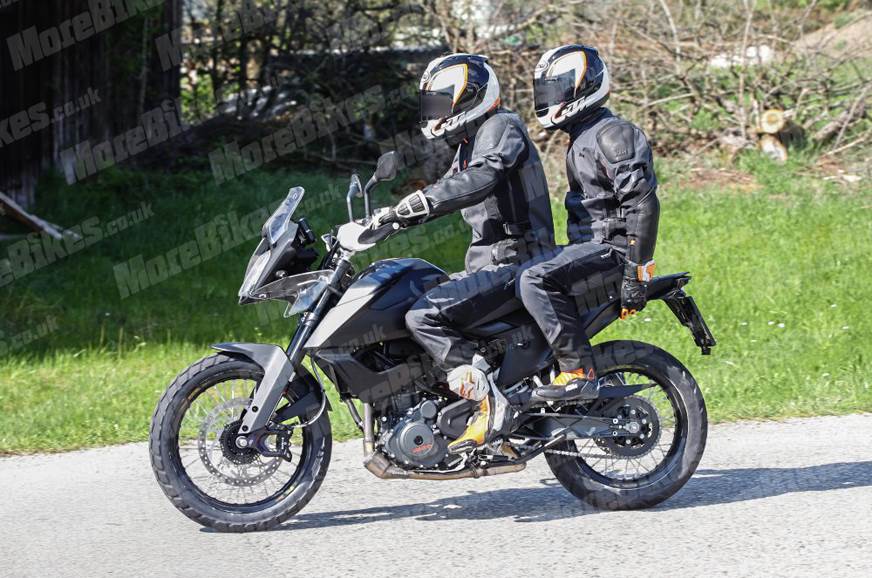 There also appears to be a larger radiator shroud, and while the fuel tank has a different-looking shape it doesn’t seem dramatically larger than the Duke’s. Nevertheless, a slight increase in fuel capacity is possible given the long-distance-oriented role of the motorcycle. The exposed trellis subframe seen on the Duke has been covered up to some extent with bodywork on the Adventure.

The seats on the Adventure appear to be roomy and the step up to the pillion seat isn’t very exaggerated. In the image, we can see a relaxed and upright riding position despite, what appears to be, a fairly tall test rider. The footpegs don’t seem to be as high up and rear-set as they are on the Duke, and the handlebar seems taller as well.

Another interesting element is the spindle offset on the front fork, fairly evident in the image. This means that the front axle is placed slightly ahead of the fork centreline, which has the effect of decreasing trail. Since the fitment of a larger front wheel will increase the trail, the two should cancel each other out to some extent and the overall effect shouldn’t be too pronounced.

Although the bike in the image doesn’t have any form of crash protection or even an engine bash plate, it is safe to expect these features on the production motorcycle, at least as options. As we reported earlier, it is quite possible that the 390 Adventure will come in two variants - a road-oriented version with alloy wheels, and a more off-road focused variant with wire-spoke wheels. With that in mind, it’s still not a certainty that the 390 Adventure will come with spoke wheels as standard when first launched and that will only become clearer in time.

The mirrors and hand guards appear to be shared with the Duke and so is, of course, the engine. The engine covers seem identical to those seen on the 390 Duke and RC 390 as well.

Another element expected to be shared with the 390 Duke is the colour TFT screen, and we expect the electronics to be at least as advanced as the Duke, if not more. The Duke gets Bluetooth connectivity that allows you to manage phone calls and music from the screen. ABS at both ends is a certainty and there will likely be a Supermoto (or in this case, Off-road) mode as well, which will engage ABS only at the front wheel.

Excitement for the 390 Adventure is reaching fever pitch, with Bajaj recently confirming that the bike will be launched in 2019. We expect to see a production-ready bike at Intermot (October 2018) or EICMA (November 2018).