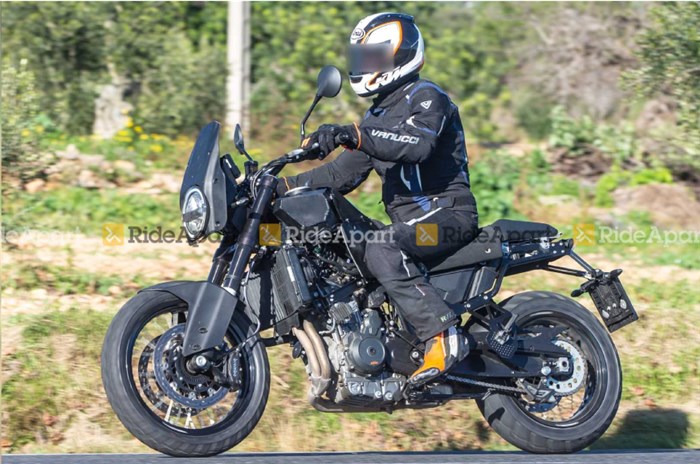 The images reveal that the test mule is powered by the 890cc parallel-twin from the 890 Duke.

At EICMA 2019, Husqvarna took the wraps off an all-new, hardcore adventure concept, the 901 Norden. Shortly after, motorcycle forums were flooded with rumours that suggested the Norden was not the only parallel-twin-powered motorcycle that the Swedish manufacturer was developing. And now, new spy pictures have confirmed that Husqvarna is indeed working on a more road-going iteration of the bike, one that will very likely bear the Svartpilen moniker.

For starters, the bike in the images lacks most of its body panels, allowing for a clear look at its powerplant. And externally, it looks just like the one on the recently launched KTM 890 Duke R with the twin-exhaust pipes coming down the front of the engine. Any other doubts about this being an engine from KTM are put to rest by what looks like the KTM logo on the lower engine casing. The production-ready unit of the engine could undergo some changes that will differentiate it from the one on the 890 Duke R. If not within the engine, the bike might sport final drive alterations that will allow for even more mid-range-focused performance than the 890 Duke R has to offer. For reference, on the 890 Duke R, this parallel-twin engine produces 121hp and 99Nm of torque.

The spy shots don’t reveal much else, but the headlight unit appears to be the same as that on the 901 Norden. Meanwhile, hardware like the suspension, chassis and brakes, too, could be shared with the 890 Duke R. At the moment, there’s no indication as to when these bikes will go into production, but given the current situation, it is likely to be in 2021. It's also likely that we'll see a Vitpilen 901 sibling alongside, as Husqvarna has made them in pairs so far, both for the 401s and the 250s that were recently launched in India.