Honda has unveiled four updated models for the Indian market and launches the new Activa 3G. 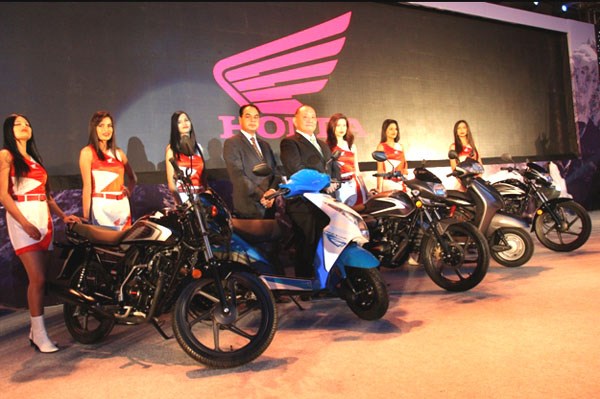 Honda has unveiled a four bike strong line up for the Indian market for 2015, including the Honda Dio scooter, Dream Neo, Dream Yuga and the thoroughly reworked Honda CB Shine. Honda has also launched a new Activa 3G that gets cosmetic upgrades, but still uses the same engine as the previous model. Honda says that this is the first leg of its series of launches, including 15 new or refreshed products for 2015. Part of the new launches will also be a middle-weight sportsbike, the Honda CBR650F.

Keita Muramatsu, President and CEO, Honda Motorcycle & Scooter India mentions that Honda aims to sell even more motorcycles and scooters this year in India, aiming at a total of 50 lakh units in 2015. This amounts to an average of 4.16 lakh units a month. The current global and Indian leader in terms of sales is Hero MotoCorp, which sells five lakh units on an average, every month.

Let’s take a look at the motorcycles unveiled recently and the Honda Activa 3G.

Honda Dio: This is Honda’s second offering in the automatic scooter segment. The refreshed Dio is powered by the same 109cc, four-stroke, air-cooled engine which also powers the Activa and the Aviator. The engine produces 8bhp at 7,500rpm, and peak torque of 0.88kgm is produced at 5,500rpm. The Dio will come with new dual tone pain schemes of blue, red, green and black, and attractive graphics to match its youthful image. The bike will also get a new three-dimensional logo. The refreshed Dio will be available by the end of March 2015.

Honda Dream Neo: Honda’s commuter segment motorcycle, the Dream Neo, has been refreshed too. The Neo gets new graphics on the tank, a side cowl and side panels. The Neo gets a new red Honda logo too. A new lockable side cowl has been added here to increase the utility value of the Honda Neo. Two new dual-tone paint schemes on offer will be black with violet and black with red options. This refreshed Honda Dream Neo will be available towards the end of February 2015.

Honda Dream Yuga: The Dream Yuga has also been refreshed. It now gets attractive stickers and graphics on the front cowl, side panels and the fuel tank. The engine now gets a red ‘Honda’ logo to add to its appeal. The fresh Honda Dream Yuga will be available with dispatches starting in the end of February. It will be available in three colour schemes namely, black, and two dual-tone schemes – black and grey, also black and red.

Honda CB Shine: The Honda CB Shine now gets a completely refreshed body design to cater to the needs of the commuter segment. It gets new side panels, a new visor, a new tail-light and a new tank. The CB Shine gets Honda’s combined braking system (CBS) that enable the rider to front disc brake even when the rear brake is pressed. The CB Shine will get Honda’s patented HET-powered engine that helps increase efficiency. The Honda CB Shine will be available starting March 2015, in four colour options namely, black, grey brown and red.

Honda Activa 3G: Honda Motorcycle & Scooter India has just launched a refreshed version of its popular scooter – the Activa 3G (or the third generation) - priced at Rs 48,852 (ex-showroom, Delhi). The scooter gets new styling seen in the new side panels, a rear tail-light and new three-dimensional Honda emblems. The Activa 3G is equipped with the same 109.2cc engine that develops 8bhp at 7,500rpm and 0.9kgm of torque at 5,500rpm. The Activa 3G gets the front linked suspension and a rear monoshock carried over from the previous Activa. Honda Eco Technology (HET) also makes its way here, along with Honda’s patent combination brake system (CBS) and useful tubeless tyres. Honda’s new Activa 3G is available in blue, red, grey, black and white paint schemes.