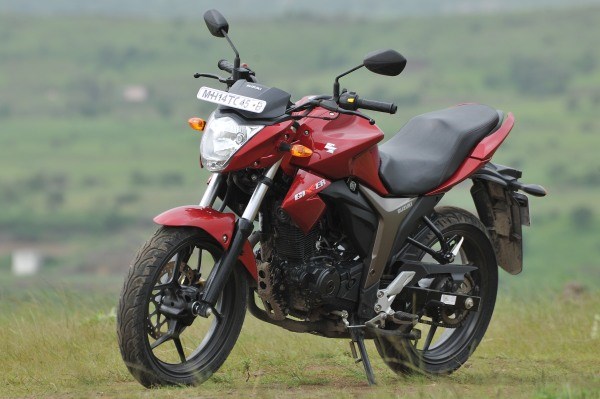 Suzuki Motorcycle India’s latest additions to the premium commuter motorcycle segment — the Gixxer and the Gixxer SF — are gaining reasonable traction in the market. The single-cylinder, air-cooled, carburettor-fed 155cc naked Gixxer was launched in September 2014, but the faired-variant came out in April 2015. Sales data collected by the Society of Indian Automobile Manufacturers (SIAM), displayed that from its launch till end-March 2015, the Gixxer naked bike sold 35,067 units in the domestic market; an average sales of around 5,000 units every month. This period also saw Suzuki export 4,726 units of the bike, raising the overall sales to 39,793 units from September 2014-March 2015.

Total production at Suzuki's Gurgaon plant stood at 42,568 units, and Suzuki carried over 2,775 units of the Gixxer model to FY2015-16. April 2015 saw a drop in the domestic motorcycle segment by 2.77 percent year-on-year, and Suzuki recorded domestic sales of 4,607 units of both Gixxer models. In that same month, the company exported 1,682 units. Atul Gupta, executive vice-president, Suzuki Motorcycle India, spoke to our sister publication, Autocar Professional, recently and said that the company can roll out up to a total of 9,000–10,000 Gixxer bikes per month, and is aiming to sell close to 100,000 units in 12 months. Since September 2014, Suzuki has sold 46,082 units (including exports).

In FY2014-15, Bajaj Auto India leads in the 150cc segment, with Yamaha Motor following. Honda, which has been weak in the 150cc segment so far, ranked number three. In April 2015, Hero MotoCorp witnessed a sharp fall in the sales of its 150cc bike portfolio, with sales of only 6,904 units compared to the 17,313 units in April 2014. At the premium-end of the commuter motorcycle segment — engine displacement of more than 150cc and less than equal to 200cc— SIAM data highlights that, TVS Motor Company leads thanks to its Apache 160 and 180 models. Bajaj Auto falls second with a gradual increase in sales. Supporting this will be the Pulsar AS200 and RS200, which is expected to draw in more sales. Positioned as the premium commuter, Suzuki’s Gixxer is doing well in making its presence felt in this category. Suzuki can expect an increase in sales with the Gixxer SF doing well in the coming months.