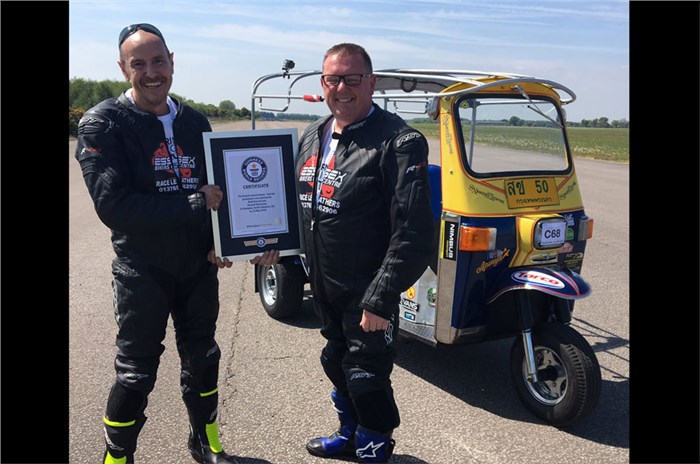 In one of the more bizarre land speed record stories you’ll ever read, a businessman from Essex, UK, has set a new speed record in an auto rickshaw! 46-year-old Matt Everard, a freight firm boss, recorded a top speed of 74.306mph (119.583kph) in his heavily modified 1971 Bangkok tuk-tuk at the Elvington Airfield in York, and his attempt has been officially recognised by Guinness World Records.

Speaking to the Press Association, Everard described buying the rickshaw in 2017 as a result of a “boozy night”, where he purchased the tuk-tuk from an eBay seller for about £3,000 (Rs 2.74 lakh). Justifying such a purchase would not be “the easiest conversation” with his wife, so Everard decided to use it to set a new record.

After taking delivery, Everard set about modifying the rickshaw, replacing the original 350cc two-stroke engine with a 1.3-litre fuel-injected Daihatsu motor, giving it a wider track, two radiators, wheel arch extensions, chunkier tyres, new wheels, and overhauled suspension, dashboard and seats. Of course, the modifications came at a cost that’ll take a lifetime and a half to recover in fares – £20,000 (Rs 18.25 lakh)!

Everard was set a target of 68.35mph (110kph) by Guinness World Records, which he cleared comfortably with his cousin riding in the back seat (no, he didn’t have to pay for the ride). After the record run, Everard said, “I thought it was going to be more wobbly. At a certain speed there was a slight wheel-wobble, but once you went through that speed it kind of evened out again and it was fine. I wasn't scared.”

The plan was to breach the 90mph (145kph) mark, but Everard said he was “over the moon” with this attempt. He intends to return for a crack at clocking 100mph (160kph) – or the speed at which auto rickshaw drivers in India take off after refusing a fare.