The Ducati Streetfighter 848 is just being unveiled to the world. We have the story. 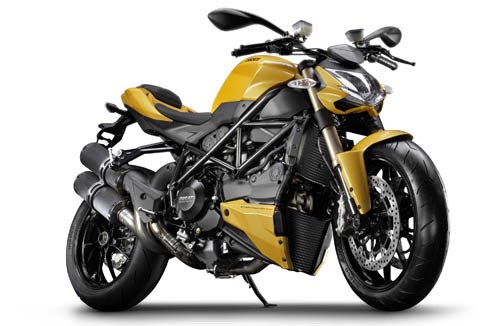 The Ducati Streetfighter 848 is just being unveiled to the world. We have the story.

A hot new Streetfighter 848 has rolled in to become amongst the first, freshly baked motorcycles to exit Ducati’s exciting 2012 oven. It ain’t broke, so the Italian master of motorcycle styling hasn’t fixed much. The Streetfighter 1098 was the winner of the ‘Most Beautiful Bike’ award at the EICMA show, Milan in 2008. Still fresh looking, this extreme naked Ducati is a purposeful motorcycle that continuous to hold its own at the contemporary stakes. The Streetfighter 848 features digital instruments including a speedometer, tachometer and clock. As with most Ducati’s, you can’t miss the exposed frame trellis.

The Streetfighter 848 shares much of its Testastretta, 11 degree, 849.4cc, engine internals with the 848 Superbike, albeit retuned to suit its new role. There’s enough power for even a more enthusiastic wrist on a naked motorcycle, the smaller Streetfighter providing a potent 132bhp at 10,000rpm. Ducati Traction Control (DTC) comes enabled on the Streetfighter 848, while the fuel-injected engine is mated to a six-speed gearbox.

Ducati has provided the Streetfighter 848 with a smoother, more flexible power delivery. Ergonomics have been revised, and the chassis tweaked for quicker, more agile handling.

The tubular, trellis frame includes a beefy, alloy and single-side swingarm. Top-drawer, adjustable suspension is standard at both ends. Pirelli tyres wrap around both delectable, 10-spoke wheels, and braking is via a pair of semi-floating, 320mm discs in front, pinched by radial mounted 4-piston Brembo calipers, working together with a 245mm disc at the rear.

The Streetfighter 848 is good news for India in particular, where it’s lower price will allow easier access to the Streetfighter brand, while providing us a naked bike with the big draw of handsome Ducati styling, and ample performance to do justice to our riding conditions.