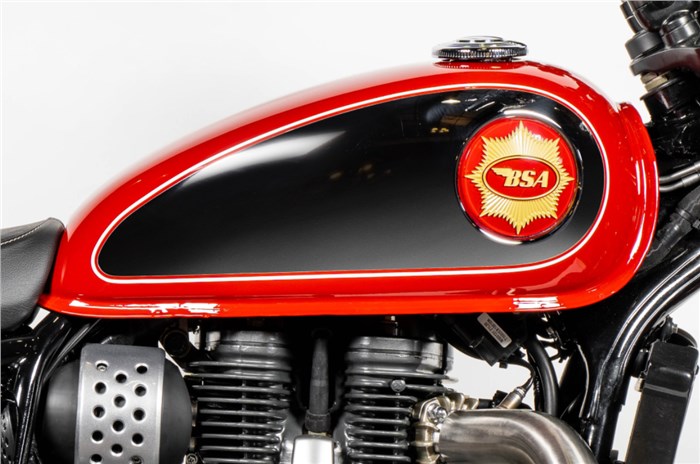 Classic Legends recently unveiled its first BSA product, the re-born Gold Star in the UK. While specification details are already out, there were a number of questions about the product that remained unanswered. A conversation with Classic Legends co-founder Anupam Thareja has cleared a few of those.

The large capacity single-cylinder is all but dead in the modern era, especially in markets with strict emission norms. However, with its 652cc capacity, a 4-valve, dual overhead camshaft (DOHC), liquid-cooled design and the drive chain on the right side, the Gold Star’s engine looked very similar to an engine we have experienced in India in the distant past – the one used on the BMW F650 Funduro from well over two decades ago. This engine was built by Austrian engineering firm Rotax, and the new BSA motor is also licensed from them.

Understandably, the BSA motor is a heavily reworked, modernised version with fuel-injection and Euro 5 compliance. The enormous task of meeting modern emissions and refinement standards was handled in conjunction with the highly respected Technical University of Graz, in Austria. TU Graz also handled the visual design of the engine, which is completely different from the base Rotax engine, and made to look as similar to the original Gold Star singles as possible.

This motor makes 45hp and 55Nm, which is a little lower on power, but has more torque when compared to the Royal Enfield Interceptor 650. Top speed is 166kph and future variants of this engine could make more power.

Thareja tells us that the BSA Gold Star project was managed by British engineering specialists Ricardo. This includes the chassis design and development as well as the overall performance and rideability calibration.

We’re told that the BSA project has been under development from the time the Jawa development began and has been running alongside since. The Gold Star runs a double cradle frame with an 18-inch front and 17-inch rear wheel combination. The bike runs Pirelli Phantom Sportscomp tyres, while suspension duty is handled by a 41mm telescopic fork and twin rear shock absorbers. The braking set-up uses a single disc at both ends with Brembo calipers and dual channel ABS by Continental.

The new Gold Star was designed by another British firm, Redline Studios. The idea was to keep the bike as faithful to the original Gold Stars as possible. While the engine plays a significant visual role, details such as the BSA badges on the teardrop shaped fuel tank and the reverse sweep instruments also stay true to the originals. Thareja made it clear just how important the design was to the reborn BSA project, “while it’s a completely design-led project, kudos to the engineering team to be able to work with that.”

Classic Legends plans to have the Gold Star on sale in the UK by the start of the riding season, which is generally around the end of March. The motorcycles will be manufactured in India for now, but Classic Legends says that it is working on opening a new assembly facility in the UK, and that, eventually, manufacturing will be split between India and the UK. This facility will be different to the government grant-issued EV facility that is being used to develop the EV BSA. That project is being managed by the Warrick University and is still some time away from commercial launch.

Classic Legends currently has no dealer network in the UK because the Jawa licence allows for motorcycles to only be sold in India and a few Asian markets. Thareja states that while there will be some flagship stores, a majority of the BSA sales will be through existing multi-brand dealers in the UK.

As for whether these bikes will be sold in India, Thareja doesn’t rule it out, but adds that it won’t be any time soon. The immediate priority is to first sell in the UK, then expand to neighbouring Europe, followed by the US market. India will be considered only after that. He added that there is particular interest in the US and South American market as well.

More significantly, there is also the concern of the BSA trademark being owned by the TI Murugappa Group in India. Thareja states that they have not yet sorted this out because it was not a priority and that he couldn’t comment further on it. This is also why he also couldn’t comment on the India launch. However, he went on to state that he doesn’t think it should be an issue, ‘because there is no animosity there’.

If and when the BSA Gold Star eventually comes to India, do you think Classic Legends will be able to price it competitively against the Royal Enfield 650s? And if so, would you be interested in a large single over a parallel twin? Let us know in the comments section below.

It seems every auto maker feels that Indians are fit only to ride Activa or Splendor and not any other good bikes (while I dont have any grouse on Activa or Splendor). There are lots of people who are willing to buy good bikes provided there is a good finance option and service network. When the manufacturer does not have a vision, what to say.

It seems every auto maker feels that Indians are fit only to ride Activa or Splendor and not any other good bikes (while I dont have any grouse on Activa or Splendor). There are lots of people who are willing to buy good bikes provided there is a good finance option and service network. When the manufacturer does not have a vision, what to say.