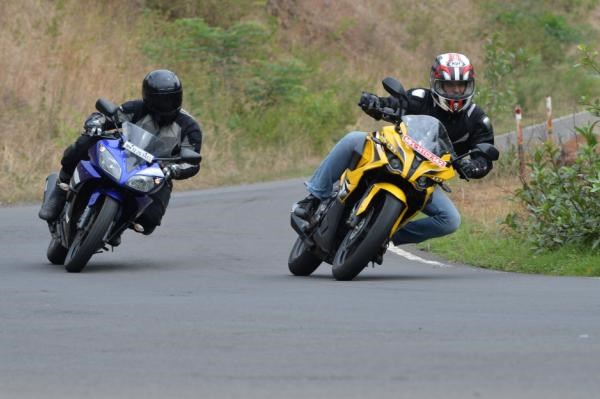 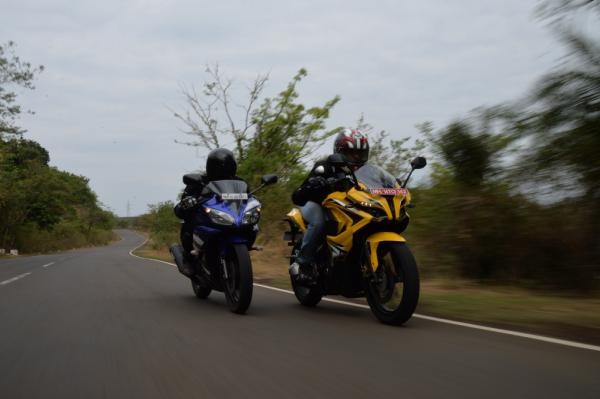 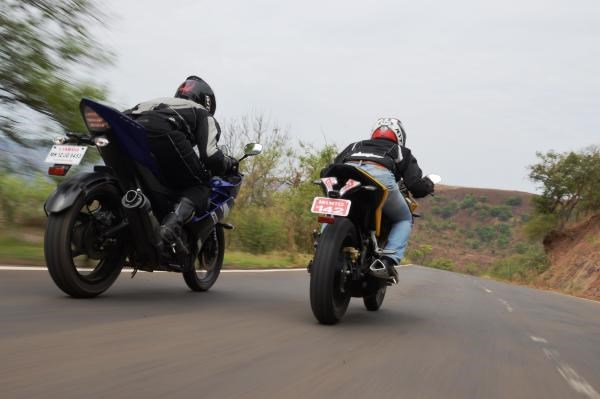 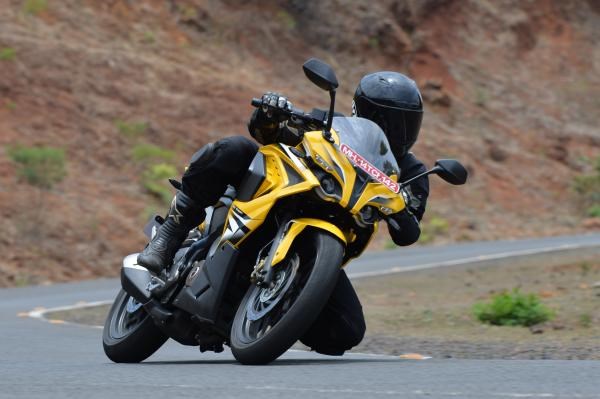 We’ve just ridden the Bajaj Pulsar RS 200 and Yamaha’s YZF-R15, back-to-back over the past two days and although this may seem like a classic case of ‘faster the machine, more tempting the choice,’ eventually one does need to consider a maturely taken decision after evenly weighing all pros and cons. We’ve not compared two large, fire-breathing bikes here, and these are not even quarter-litre motorcycles. They still do attract a large number of new riders who wish to make the most out of their motorcycles. So let’s take a look.

The YZF-R15 has been around for six years on Indian roads and Yamaha even gave its mini-sportsbike an extensive makeover three years ago. Intentionally or not, the Japanese motorcycle specialist has not yet offered a larger capacity motor for enthusiasts. So, moving at steady pace, Bajaj has swooped in and introduced the RS 200, a machine that imparts freshness in every respect. Ironically, Yamaha’s R15 V2.0 looks every bit the same when viewed upfront as its predecessor, the YZF-R15.

However, when viewed closely, the new fairing does look more aggressive, with the same twin headlights borrowed from the previous gen YZF-R1.

Bajaj has made the most of every bit of space on its bike body to offer a young, surely slightly over-the-top for some design on the RS 200. The twin projector headlamps do a fine job of lighting up the road ahead at night, but those looking for clean styling might just find the front fascia a bit too busy. The Yamaha still looks every bit as attractive as the first time we laid eyes on it, but bits like the instruments are now dated. It lacks features such as a clock and rev-limiter lights, all thoughtfully in place on Bajaj’s RS 200.

Switchgear is smart on both bikes and work precisely; Bajaj ups the game here by providing blue back-lit control switches. Grips and levers on both bikes feel good to touch and feel. Mirrors on the Bajaj are not as wide as the ones on the Yamaha, which sometimes call for a quick shift of elbow on the RS 200 to allow fair rear view.

When viewed from behind, Bajaj’s RS 200 looks every bit as futuristic as from ahead. Bajaj provides inset grab handles and a well-contoured split saddle for the rider and pillion. The slim 10-spoke alloy wheels are an extension of the bike’s sporty design. A stubby exhaust is seen, with a hooked outlet.

The Yamaha looks sporty viewed from the rear. Yamaha has smartly provided it with a tall tail panel, which looks just fine, but it is a really tall proposition for the pillion when seated. The protective yet ugly mud guard unit completely robs the bike of its alreadysubstantial underbody area. The Yamaha has a stylishly long exhaust that looks nice even today.
Overall quality, fit-finish and attention-to-detail are top drawer, with Bajaj steadily improving on these fronts. Yamaha, on the other hand, has always provided this and remains at the top of its segments on quality.

All about that base

There are big differences in how these two perform, as one would imagine. Bajaj’s Pulsar RS 200 is equipped with a 199.5cc, four-stroke, liquid-cooled, single-cylinder and fuel-injected engine, with a four-valve per cylinder layout. The bike settles immediately into a crisp-sounding but steady idle after thumbing the starter; when you rev the motor on the RS 200, it spins eagerly to redline, just after a momentary blink of a bright shift warning light. The Pulsar RS 200 makes a healthy 24.2bhp at 9,750rpm and 1.9kgm of torque, this healthy output makes sure the motorcycle leaps ahead without strain at lower speeds too. The RS 200 has good bottom-end performance. It slacks up just a wee bit in the mid-range, but thereafter picks up its game to sprint towards a strong top-end and meet its redline with a nice, racy exhaust note.

The Yamaha YZF-R15 is equipped with an equally modern and up-to-date engine, but it has its limitations when faced with the faster new Bajaj bike. Yamaha’s 149.8cc, four-stroke, fuel-injected and liquid-cooled engine outputs a decent 16.8bhp made sooner at 8,500rpm, and the bike does not have to be revved near its rev-limit to extract maximum performance. Yamaha has tweaked the bike ECU for better response, changed throttle mechanism for an even more linear feel and also revised its final drive ratios, improving the V2.0. Although the YZF-R15 V2.0 brought in several technical advancements to brag about when it launched, including its 4-valve per cylinder layout, the Japanese manufacturer will today do well to introduce a larger capacity engine in India.

Once the two bikes are lined up and given some stick on empty roads though, glaring differences in performance becomes very apparent. The lightweight Yamaha manages the dash to 60kph in 4.58 seconds, whereas the quick Bajaj RS 200 achieves the same in 3.76secs. The Bajaj RS 200 can go on to achieve a heady true top speed of 137kph in top gear.

There’s a sizable difference in the way these two motorcycles feel after getting astride. The Pulsar RS 200 has a more upright, comfortable seating position, and you sit with arms slightly leaned-into the tall, clip-on handle bars. This riding position does not strain your wrists. Once you get astride the YZF-R15, it is immediately apparent the Pulsar RS 200 is relatively so overweight, as a matter of fact a whole 30kg more than the Yamaha. The rider on the Yamaha is seated in a forward biased position, with aggressive lean into the handle-bars and the foot-pegs are extended backward for a serious riding posture.

Bajaj’s Pulsar RS 200 is well composed while riding longer distances on open roads and can cruise comfortably at an indicated 100kph as well. The Yamaha YZF-R15 does not make an ideal mile-muncher, and is best suited for commuting within the city and riding through the twisties.

The Pulsar absorbs undulations well, with stable feel. Over bumps, it's sporty suspension feels a bit firm. This is useful over undulations, all absorbed well, even with a pillion without its rear suspension bottoming out. When attacking corners, the pulsar turns in quickly, although when trying to extract more, things tend to get a bit twitchy. Once used to this however, cornering can be really rewarding; and good grip from the RS 200’s MRF tyres only take things to the next level.

R15’s ride quality is better over bumps but feels slightly unsettled over undulating roads. It is stable through corners and one can be rest assured it will carry a selected line all the way through with precision. The R15 definitely scores bonus points over Bajaj’s RS 200 for being consistent and quicker through corners.

The two bikes score top points when it comes to braking. The Bajaj Pulsar RS 200 comes to a halt in 17.96 meters and the Yamaha betters the same to stop in 16.58 meters, both offering a progressive feel and decent feedback at the lever. Bajaj provides its top spec RS 200 with an even larger 300mm diameter, ABS brake, but only in front. This worked well on wet roads.

The motorcycles in question seem similar at first glance but in reality are two very different machines.The Bajaj RS 200 can carry you across cities with decent comfort, whereas the Yamaha can really put a star in your riding skills.

In the handling department, the Yamaha scores a little over the Bajaj, but the same Bajaj offers you a lot more, including a comfortable riding posture with decent enough handling, ABS brakes, a perimeter frame and stress-free performance. Yamaha offers its YZF-R15 for Rs 1.18 lakh, and Bajaj, it's RS 200 for Rs 1.21 lakh and Rs 1.30 lakh with ABS (prices, ex-showroom, Delhi). In the end, this isn’t such a close call, for even though both motorcycles are serious performers, Bajaj’s Pulsar RS 200 offers far more bang for your buck, a clear victor in this race to the finish line.