We look at how the Bajaj Pulsar NS160 compares with the Honda CB Hornet 160R, the Suzuki Gixxer and the Yamaha FZ-FI on paper. 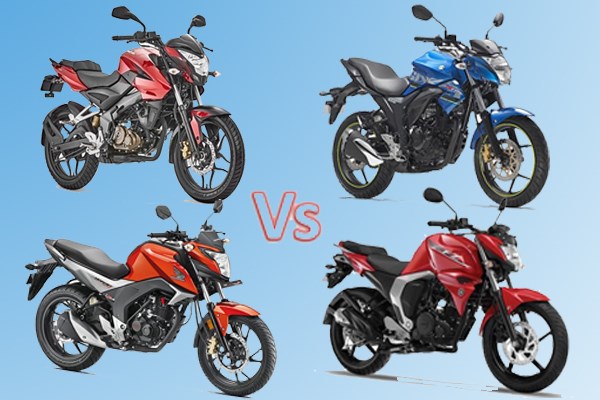 Bajaj has introduced a number of new motorcycles under the Pulsar banner over the years, with the most recent ones being the NS, RS and AS models. However, the brand still enjoys considerable success from traditional Pulsars, like the 150, 180 and 220 DTSis. Though, there is one segment where Bajaj hasn't managed huge numbers – the premium 150-160cc category. In this segment, Yamaha regularly ships upwards of 20,000 units of the FZ-FI per month, while other rivals like Honda and Suzuki are also seeing success with their offerings, the CB Hornet 160R and the Gixxer, respectively. Bajaj needs a rival to these motorcycles that fits between the traditional Pulsar 150/180 and the more expensive NS200. This is where the new NS160 comes in; it doesn't replace the smaller Pulsar 150, but is positioned ahead of it.

The Bajaj Pulsar NS160 shares the style of its bigger brother, the NS200, and that means handsome lines, an underslung exhaust and split grab rails. Colour options are not disclosed yet, but we do like the Grey-Black combination on the bike recently spied at a dealership. It's a similar theme to the BS-IV compliant 2017 NS200 that went on sale a few months earlier. Overall, the Pulsar NS160, aside from the new colour scheme, will cut a handsome, yet familiar shape. Looks play an important role in this segment and the NS160 will certainly be up to the challenge. We'll have to spend some time with the bike to see if it can meet the quality and finish of benchmark-setting rivals like the Yamaha FZ.

While it looks familiar, the NS160 uses a new 160cc mill that has been specially built for it. The figures mentioned here are from Bajaj's global site, but we expect the India-spec model to have very similar numbers. Bajaj's new 160cc motor is oil-cooled and is the only one here to run a four-valve head. Power output stands at 15.5hp at 8,500rpm and 14.6Nm at 6,500rpm. These numbers make it the most powerful of these four and second only to the Honda in terms of torque, making just 0.16Nm less as the same rpm. Interestingly, the NS160 makes less power but more torque than the air-cooled engine from the now discontinued AS150. It is more powerful than the 14hp/13.4Nm Pulsar 150, and while it does fall short of the Pulsar 180's 17.02Nm, it offers slightly more torque. The FZ-FI makes the lowest numbers but is the only one to come with fuel injection. The global Bajaj site doesn't specify what gearbox the NS 160 will run but we suspect it will be a five-speed unit, like in the AS 150.

The NS160 uses a perimeter frame, just like the NS200, and that makes it stand out from its rivals with their more traditional diamond-type chassis. Suspension is handled by conventional forks up front and a monoshock at the rear, a combination used by every motorcycle in this segment. The tyres, however, will be slimmer than on the NS200, with a 80/100 R17 front and a 110/80 R17 section rear. All three of its rivals offer larger tyres, spanning 100/80 R17 at the front and fat 140 section at the rear. The Gixxer and FZ ship with a radial tyre at the rear. Braking is handled by a disc up front and a drum at the rear. There's no word on whether a rear disc will be offered later. Suzuki offers an optional rear disc and so does Honda if you pay about Rs 5,000 more for its CBS version.

All four motorcycles are priced closely, within a few thousand of each other. The most affordable one here is the fun little Suzuki Gixxer that costs Rs 79,676 and Rs 82,779 with a rear disc. The Pulsar NS160 and Yamaha FZ-FI are priced almost on par at Rs 82,400 and 82,300 respectively. Finally, the Honda CB Hornet 160R will set you back by Rs 84,994 or Rs 89,533 if you go for the CBS/rear disc brake version. These are pre-GST rates and there's a good chance that they may change a little after July 1.The NS160 is currently available in some showrooms in Pune and Mumbai, with stocks expected to reach dealerships around the country in the coming days. Look out for a comparison review soon.