This scooter, which appears to be the Pure EV EPluto 7G, also seems to have suffered from thermal runaway of its battery pack. 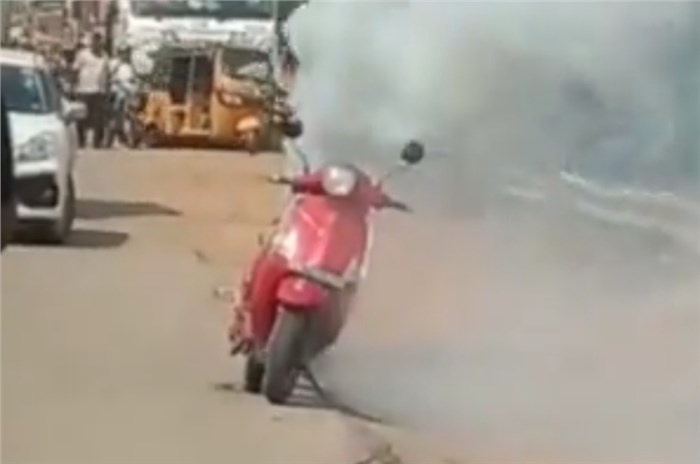 Another electric scooter has caught fire, seemingly from thermal runaway of its battery pack.

Just a few days after an Ola S1 e-scooter was spotted ablaze in Pune, yet another electric scooter has been spotted on fire. This time around, the scooter appears to be the Pure EV EPluto 7G, and it too seems to have suffered from thermal runaway of its battery pack.

The incident reportedly took place in Chennai, where a red scooter is seen stationary on the side of the road with smoke billowing out from its underseat area where the battery pack is stored. If this is indeed the Pure EV EPlute, then this marks the third incident of this scooter catching fire in the last six months, giving it a rather shocking safety record.

According to the company’s website, the scooter uses a Li-ion battery pack, with NMC (Nickel Manganese Cobalt) cell chemistry, which is the same kind used on the Ola e-scooters, and most other Li-ion equipped e-scooters. This type of battery is prone to a phenomenon called thermal runaway, where, due to overheating, the internal temperature and pressure of the battery rises at a quicker rate than can be dissipated. Once one battery cell goes into thermal runaway, it produces enough heat to cause adjacent battery cells to also go into thermal runaway. This produces a fire that repeatedly flares up as each battery cell ruptures and releases its contents.

This incident comes hot on the heels of another incident in Tamil Nadu, where a father and daughter lost their lives after their e-scooter’s battery caught fire when plugged in for charging. Sales of electric scooters are steadily on the rise, and with India descending into the thick of summer, the safety of these vehicles has come under scrutiny. Many of these products have no cooling system for their batteries. The central government has now deputed a team to probe recent incidents and submit a report, and is expected to develop a set of SOPs around handling EV fires.

Certain manufacturers are moving to a slightly different type of Li-ion chemistry called LFP (Lithium iron-phosphate) batteries, where NMC isn't used, and the cathode material is LiFePO4 (Lithium Iron-Phosphate). While this type of battery does have a slightly lower energy density, there are a number of advantages, including longer life and a far lower risk of thermal runaway – factors that might make it a safer choice in our climate.

Other manufacturers, like Ather Energy (which also uses NMC batteries, but has not faced any known overheating issues), have designed cooling systems for their electric powertrains, where a fan is used to force cooling air over components that may be prone to overheating.