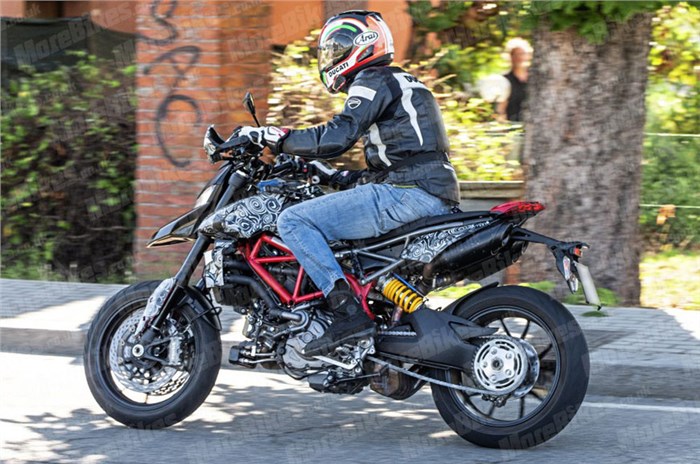 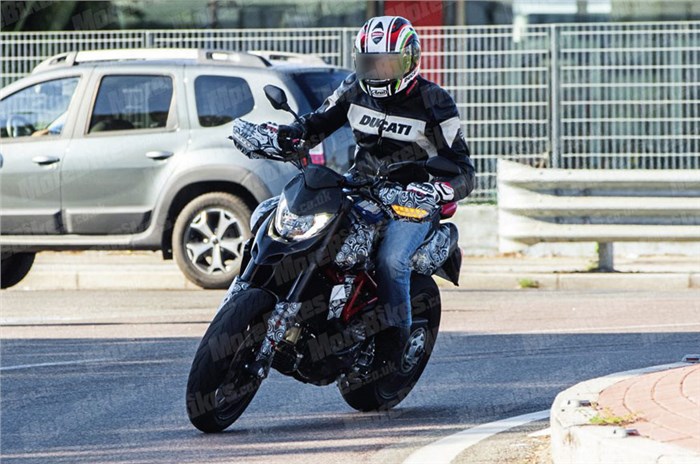 Ducati appears to be working on an updated Hypermotard for 2019 as a heavily camouflaged test mule has been spotted testing in Europe. From the images, it looks like the upcoming motorcycle has a few styling elements that hark back to the original Hypermotard first seen in 2005.

The spy images show that the bike has considerably revised bodywork, and the headlight also appears to be wider and wraps around the cowl all the way to the fork. In profile, the new Hypermotard looks leaner and sharper than the current motorcycle. Also, it features a redesigned exposed subframe that does make it look more athletic. The most significant visual distinction is the twin under-seat exhaust pipes, which is similar to the original Hypermotard that first made an appearance over a decade ago. Speaking of the exhaust, we suspect that the new unit may have a larger catalytic convertor to meet the upcoming Euro-V emission norms set to come into effect in 2020. The upcoming Hypermotard has also retained the single-sided swingarm, a trait which has been present on the bike since its inception.

The motorcycle that has been spotted testing appears to be riding on a Marzocchi USD fork and Sachs monoshock. That said, we do believe that Ducati will make a higher-spec variant featuring fully-adjustable Öhlins suspension, top-spec Brembo brakes and Marchesini wheels. The engine on the bike appears to be the same 937cc, L-twin cylinder, liquid-cooled motor as seen on the existing bike. There also appears to be redesigned radiator shrouds, but we believe this change could have come about thanks to a new larger radiator for better heat management.

Expect Ducati to fully unveil the bike at the end of the year, mostly during the 2018 INTERMOT in October or EICMA in November. However, the bike will only hit the roads early next year and will be launched in our market too.