As the KTM 125 Duke is the most premium 125cc bike on sale, we pit it against a few of its higher displacement rivals, on paper. 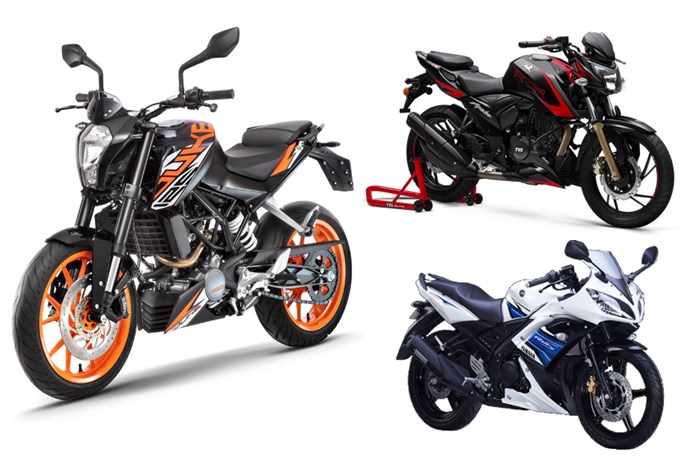 KTM has just launched the 125 Duke in India at an introductory price of Rs 1,18,163. Taking into consideration that the 125 Duke has no direct rivals, we’ve compared it to two bikes in the same price bracket – the Yamaha R15 S (Rs 1,16,746) and the TVS Apache RTR 200 4V ABS (Rs 1,10,805). The new 125 Duke is the most affordable KTM bike to go on sale in India and, unlike the international-spec model, the Indian version is based on the KTM 200 Duke. The Yamaha R15 has been at the forefront of the sub-150cc, performance inclined market ever since its launch. We’ve added the Apache RTR 200 4V to the mix as its ABS variant’s pricing falls in the same category. While we are yet to ride the KTM 125 Duke, this spec comparison will give you an idea on how these motorcycles stack up, on paper.

The 125cc motor of the India-spec 125 Duke sits on the same trellis frame as the 200 Duke that is currently on sale here. It’s the only bike in this comparison to feature an inverted fork, while a monoshock unit is common to all the three. The Yamaha R15 uses its signature ‘Deltabox’ perimeter frame and a telescopic fork. The KTM 125 Duke, despite its lack of bodywork, weighs in at 148kg, while the R15 S is the lightest at 134kg. The Apache is the heaviest of the lot at 149kg, but considering the extra power on tap, it has the highest power-to-weight ratio. The Apache also gets a unique split double cradle frame, with the engine acting as a stressed member.

The KTM 125 Duke for the Indian market gets its styling cues from the 200 Duke, unlike the European-spec bike that is heavily influenced by the current 390 Duke. It also loses out on the large full-colour TFT dash and WP Suspension, in an effort to price it more competitively. The KTM and TVS offerings feature an all-digital dash, while the Yamaha employs a semi-digital instrument cluster. The RTR 200 4V is the only bike here to get a slipper clutch.

The KTM is a modern sport-naked that has an engaging, yet not too aggressive riding position. It features sharp and aggressive lines complemented by bright new colour schemes. The Apache RTR 200 4V is also a naked motorcycle that has been designed keeping track performance in mind. Although that may be true, it has the least demanding ergonomics of the three, being slightly more relaxed than the Duke. The Yamaha R15 S shares its styling with the now discontinued Version 2.0, but, despite the age, the bike still looks sharp. The Yamaha offering has the sportiest riding position with clip-on bars and mildly rear-set footpegs.

The 125 Duke punches above its weight and is equipped well enough to take on the R15 S and other bikes in the 150cc segment. The baby Duke has done extremely well in the European market and KTM will be banking on the new offering to achieve the same success. With the KTM 200 Duke’s price tag crossing the Rs 1.5 lakh mark, the 125 Duke is a more budget-friendly offering for someone planning to enter the KTM portfolio. The baby Duke is also a good option for young riders stepping into the world of performance bikes as the 390 Duke and the 200 Duke are frantic machines, both of which require some experience to really enjoy the performance they offer. The Apache RTR 200 4V offers a great mix of practicality, performance, features and value. The Yamaha R15 S is the most track-focused machine amongst the three and the brilliant chassis setup makes it a good learning bike for track junkies or riders who have a soft spot for mountain twisties. Whether the KTM 125 Duke replicates the success achieved of the 200 Duke is something only time will answer. We will be riding the KTM 125 Duke soon, so watch this space for more updates.