The bikes get new livery, bigger brakes and are BS IV compliant; the RC390 gets drive-by-wire throttle and slipper clutch; Duke updates next. 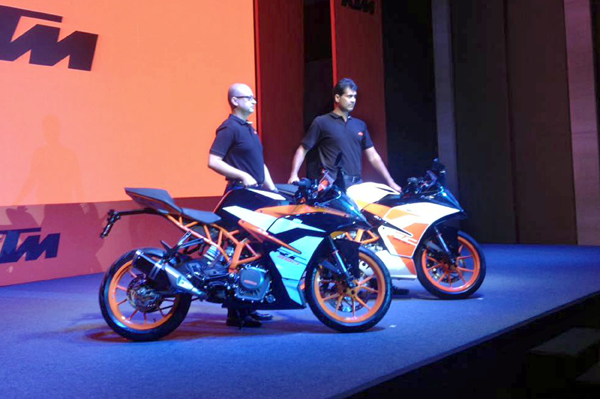 KTM India has upgraded its RC range of fully-faired motorcycles for 2017. Both the RC200 and RC390 get mechanical and cosmetic updates and are priced at Rs 1.72 lakh and Rs 2.25 lakh (ex-showroom, Delhi), respectively.

The 2017 RC200 gets new livery with revised graphics and a white tank. While the powertrain has been carried over unchanged from the 2016 model, the bike is now Euro IV compliant. The front disc brakes are bigger by 20mm and now measure 300mm.

The RC390 also gets new graphics along with a bigger front disc (320mm against the older 300mm units). But the changes don’t stop there. For one, the 2017 bike is Euro IV compliant. With a kerb weight of 163.5kg, it is also heavier by 4.5kg. Peak torque has increased by 1Nm to 36Nm, and it also gets a new two-stage exhaust with a swept canister. This is unlike the underbody unit that the last model featured. To top it all off, it also gets a ride-by-wire throttle and a slipper clutch.

KTM will follow the 2017 RCs with updated versions of its Duke nakeds, sometime in the first quarter of 2017. Changes to the new Dukes are likely to mirror their RC counterparts. The 390 will receive a BS IV-compliant engine, drive-by-wire throttle and a slipper clutch. Additionally, the Duke 390 will also get an all-colour TFT screen that can be opted with smartphone connectivity.