We head out in Toyota’s bestselling Innova Crysta to explore the rich architectural legacy of Hampi, which was once one of the world’s great cities. 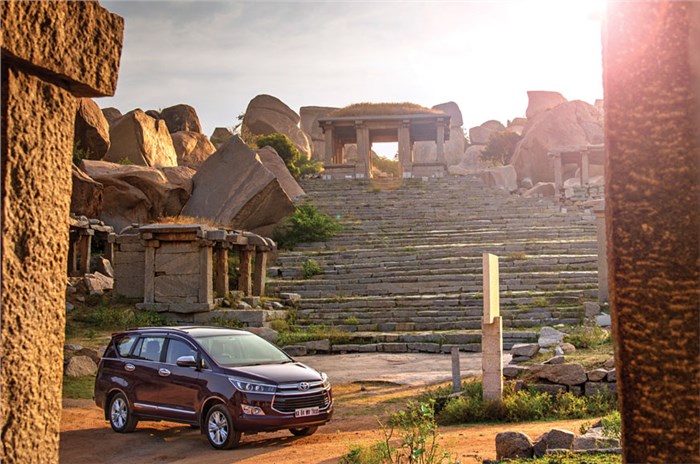 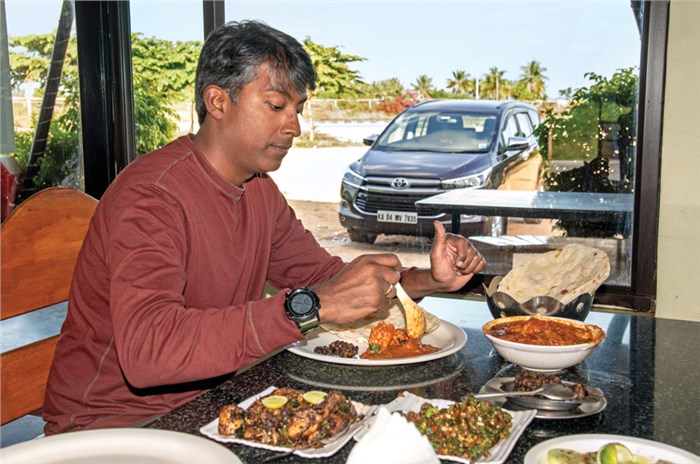 An early morning drive is the right time and the right way to appreciate Bengaluru’s many pluses – and we are not talking about the weather, which is pleasant year round. The city is the world’s fourth-largest tech cluster, the hub for India’s $150 billion tech sector, and accounts for about 10 percent of the country’s GDP. It is also a cosmopolitan metropolis that draws in people from across the country. We are, of course, not going to be just driving around the city in the Toyota Innova Crysta – a car that is the gold standard for MPVs in India, and one that was specifically made for Southeast Asian road conditions. On the infotainment screen is the route map for Hampi, another great city that was discovered over 500 years ago, and which was as celebrated then as Bengaluru is today. The road that leads to it is about 350km long, and passes through sleepy towns and busy highways. We depress the Crysta’s accelerator, feel the car surge forward smoothly, and settle down for an involving ride to the capital of the Vijayanagara Empire.

The rise and rise of Hampi

The ruins that we were going to encounter are spread out around thousands of hectares in the Tungabhadra basin, near Bellary. While the history of Hampi goes back all the way to ancient times, the city came into its own with the establishment of the Vijaynagara Empire between the mid-1300s to the mid-1500s.

As with all dynasties and empires, there are a lot of legends surrounding the rise of the empire, but it is widely believed that the Vijayanagara Empire was founded in 1336 by two brothers Harihara and Bukka of the Sangama dynasty. The brothers chose a pilgrimage centre as their capital; and soon enough, a grand city came up around it. By the late 1300s, the kings of Vijaynagar ruled the whole of southern India. The story of Hampi is closely aligned with the struggle for supremacy in the southern part of India in the medieval ages. The initial rulers of Hampi fought several wars against their neighbours, including the Hoysalas and the Madurai sultans, and later with the Bahmani sultans and the rulers of Bijapur. Hampi’s heyday was during the reign of Krishna Deva Raya, the third ruler of the Tulavas; the third dynasty to rule over the city. Krishna Deva Raya was not without his flaws – he was known to be prone to extreme bouts of anger – but he is also known as an enlightened king.

He was not only a brave ruler who brought his kingdom’s troublesome neighbours to heel, but he also had a keen interest in the arts. During his 20-year reign in the early decades of the 1500s, he not only patronised music, poetry and architects, but also wrote poetic compositions himself. Under him, Hampi – already a mighty city when he ascended the throne – became one of the world’s largest and richest metropoleis. Several travellers (especially the Portuguese Domingo Paes in the early 1500s) compared it to Rome. 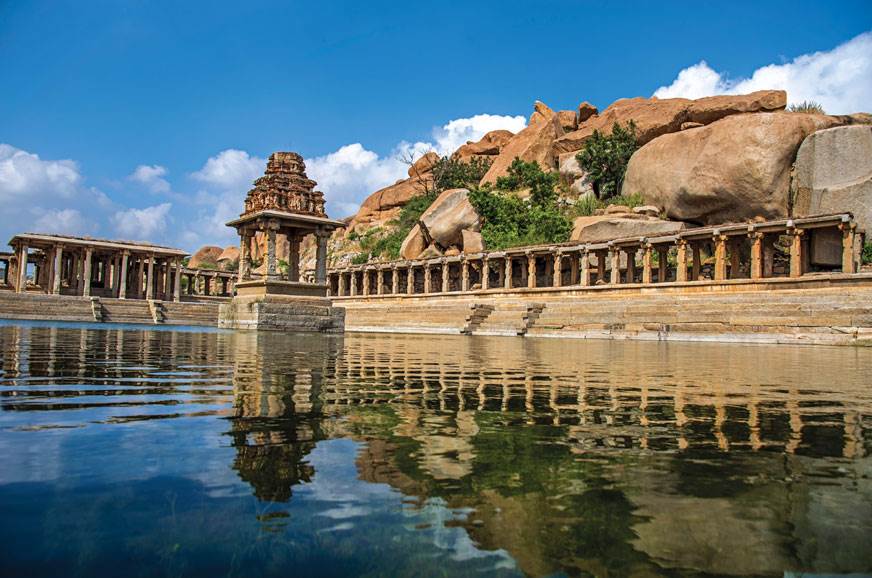 Sacred water tanks or pushkaranis are among Hampi’s many architectural highlights.

We break for lunch at the town of Chitradurga, and feast on an authentic Kannadiga lunch.There’s lots of rice, bisi bele bath, and saaru, kootu and huli. It been over 3 hours since we left Bengaluru, but the hours seem to have flown by and we are in good spirits. The lack of fatigue is possibly a direct consequence of travelling in a car such as the Crysta, which keeps occupants comfortable, regardless of whether you are out on the highway or in the city. 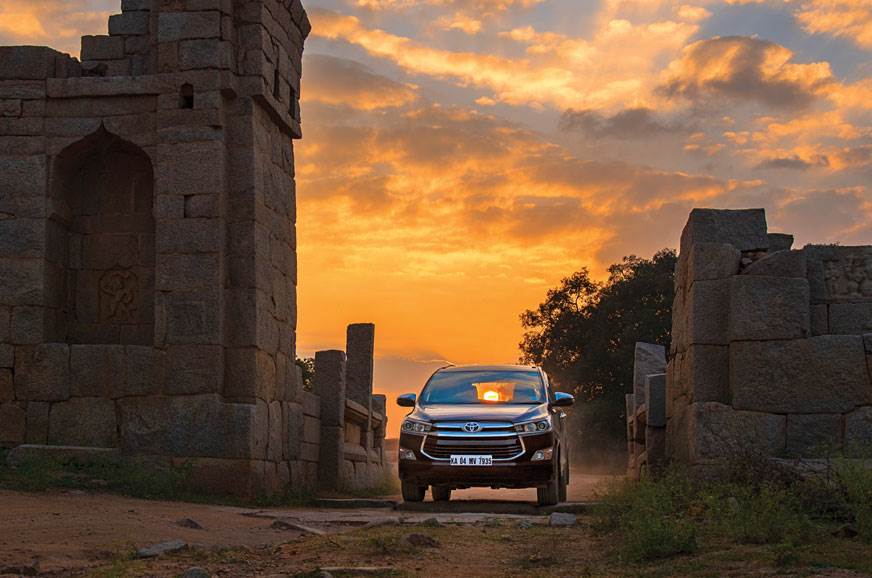 Hampi reached its zenith in the early 1500s, during the reign of Krishna Deva Raya.

Ever since the Crysta took on the mantle from its predecessor, the original Innova, it has built on its success and become the only real, reliable and well-appointed MPV on our roads today. The first Innova showed the way 15 years ago – yes, that’s right, it has been a decade and a half since Toyota redrew the MPV paradigm in India. The current model has a plush cabin that features glossy wood and leather, and LED ambient lighting; an instrument panel that sports a harmonius, flowing design; and a range of refined and robust engines – a 150hp 2.4-litre motor with a 5-speed manual gearbox, and a 174hp 2.8-litre engine with a 6-speed automatic. All these indicate that the Innova Crysta has only one competitor – itself. As important is the way Toyota has engineered space inside the cabin – which is roomy and seats seven adults – and the car’s SUV-like stance, both of which contributed in making the Innova Crysta the country’s bestselling MPV. In fact, unsurprisingly, India accounts for the most number of Innovas sold by Toyota globally. 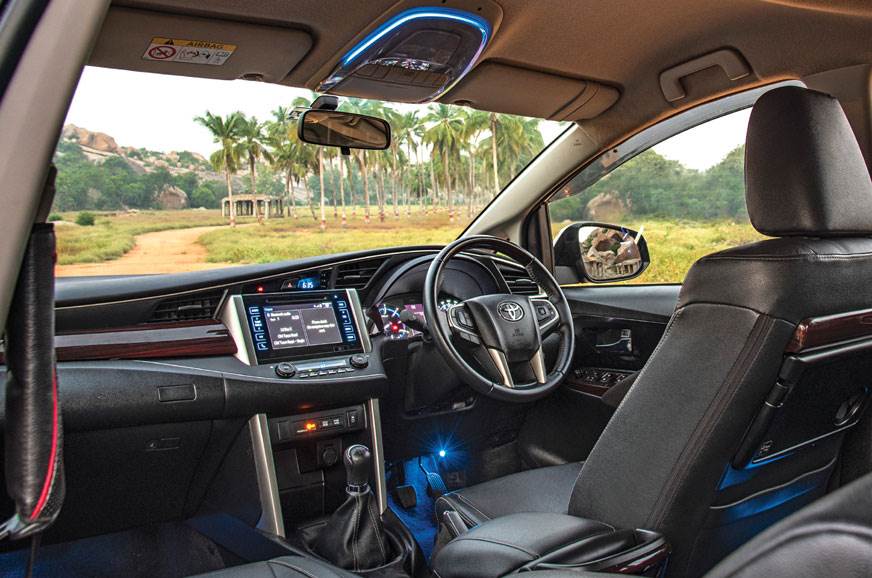 We reach Hospet, the town closest to Hampi, by early afternoon, and immediately proceed through the narrow, congested streets towards the UNESCO World Heritage site. The general perception is that the Innova Crysta is great on highways and long journeys, but that light steering at low speeds and great turning radius makes it feel equally at home in small towns and in traffic as well. The sun is shining bright, but it is a kind of golden light.

Ahead of us, and all around us, are the monuments that point to a halcyon past: temples, palaces, halls and gateways. Prime among them are the Virupaksha temple – among the oldest structures in Hampi and one that still resonates with the prayers of worshippers; the Vittala temple and its ornate pillars and the large, expertly carved main hall; the elephant stables inspired by Islamic architecture; and, among others, the bazaar, with arcades on both sides. Here, one can still imagine the hubbub of daily trade and the clamour of buyers and sellers from all over the world. 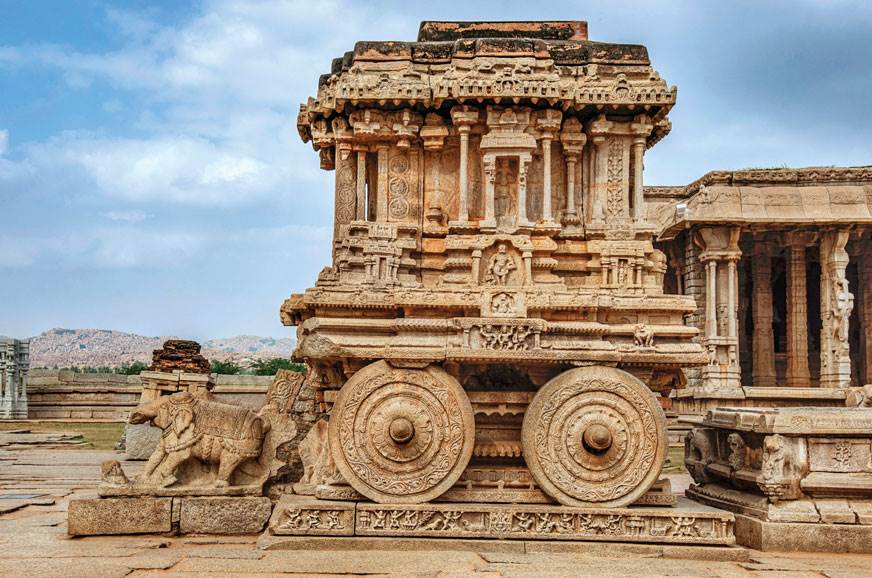 The Hampi Chariot, inside the Vittala Temple Complex, is a shrine dedicated to Garuda.

Hampi is fantastic if you are into history, but its landscape is as compelling. The region is dominated by rust-coloured rocky outcrops, massive boulders, green fields and the serenely flowing Tungabhadra River. Surely, there could have been more practical reasons why Hampi was chosen as the capital of the Vijyanagara Empire, but we’re sure its beauty, especially at sunrise and sunset, would have played a part.

The next day, as we pointed the graceful nose of our Innova Crysta towards Bengaluru, we realised that Hampi is also about legacy. It might be in ruins now, but over 500 years ago, it had set a great example with regards to cosmopolitanism, and that is something much younger cities like Bengaluru follow today.

BS6-compliant Toyota Yaris to be priced from Rs 8.76 lakh