Special Feature: Boss Of Boost - How Renault Pioneered The art of Turbocharging 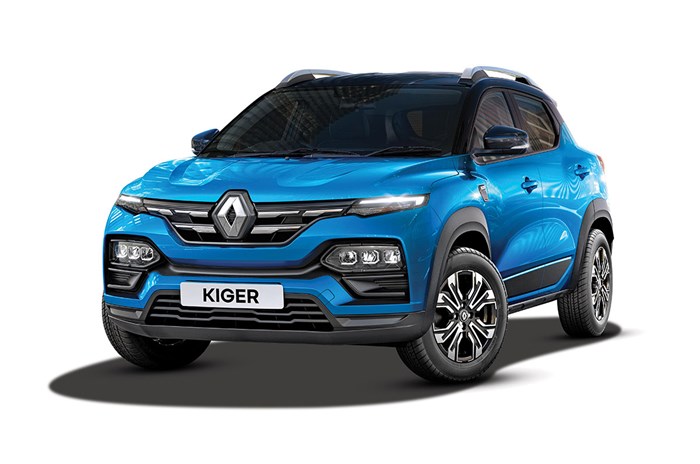 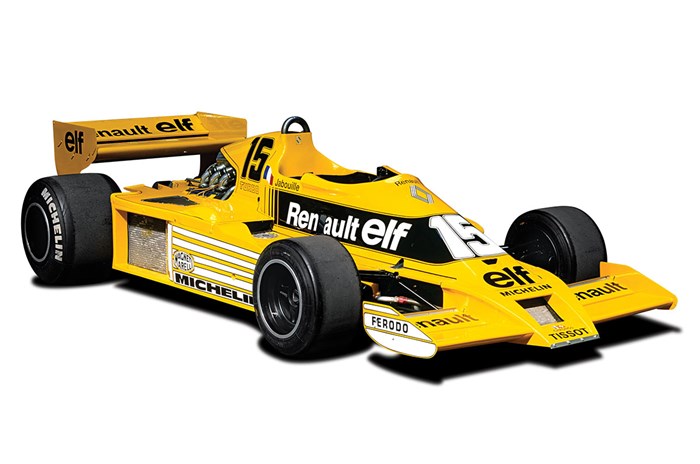 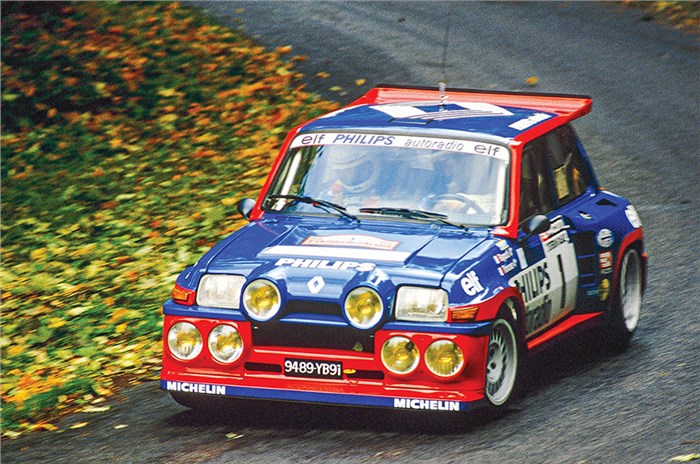 When it comes to turning hot air into horsepower, Renault is second to none. It’s bunged turbochargers into everything, from a reconnaissance aircraft and legendary F1 and rally cars, to smoking hot hatchbacks. That illustrious legacy is carried forward by its compact SUVs such as the stunning Kiger. Here, we take a look at how the French carmaker has perfected the art of forced induction.

Louis Renault needs no introduction. The eponymous founder of one of the world’s most exciting car companies was a visionary, a racing enthusiast, and a relentless innovator. But did you know that Louis Renault also patented the concept of turbocharging way back in 1902? Or that Renault was among the companies that pioneered the use of turbochargers in motorsport? The history of the French carmaker is an illustrious one, studded with many stirring tales such as these, and its expertise at turning hot air into horsepower is second to none. Today, with turbo-petrol engines in the ascendant, its over-100-year legacy is helping the carmaker set the pace in a new age in which engines are expected to be both, efficient and powerful. Now, let’s travel back in time and check out what Louis Renault was doing at the turn of the 20th century. 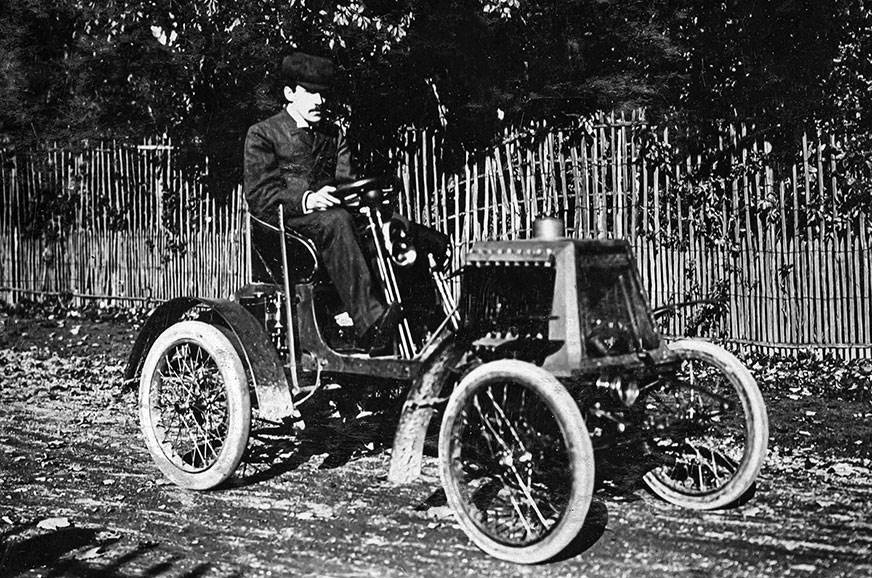 Louis Renault’s motto was to make lightweight but powerful engines.

By 1898, Louis Renault had already served notice of his ambition with automobiles such as the Voiturette that had a De Dion Bouton engine and a direct drive transmission. But, presciently, Louis Renault was also working towards a system that would help engines deliver more power without being larger in size. That led to his invention of a system known as ‘supercharging’, and in 1902, he registered a patent for the system. While the term ‘turbocharging’ would gain currency much later, with the patent, Louis Renault had opened the doors to an exciting new world. The first turbochargers were used by Renault not in cars, but airplanes. Prime among these were the Rateau turbocompressor that was adapted to be used in the Breguet XIV A2 reconnaissance aircraft’s 320hp V12 Fe engine. While Renault’s engineers kept tinkering with turbochargers, they would look closely at it only around 60 years later. What led them to do it? A fierce ambition to be on the podium in every form of motorsport. 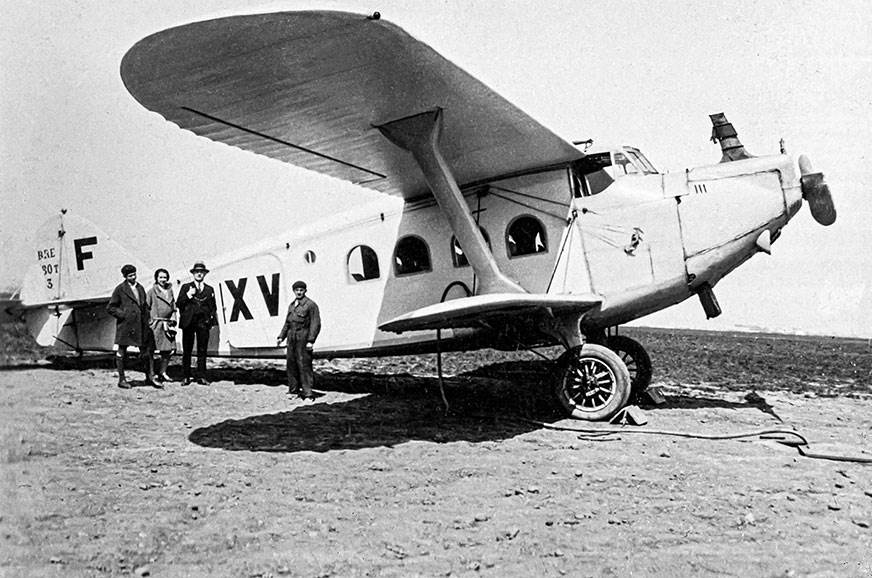 1918: The Breguet plane equipped with a Renault engine.

In the 1960s, with Alpine (Renault’s performance sub-brand) making a mark for itself in the rallying scene, the carmaker decided that the time had come to infuse funds into motorsport. And, while a naturally aspirated 2.0-litre V6 engine helped Alpine shine brighter at certain events, more horsepower was the need of the hour, especially since Renault wanted to conquer Le Mans itself. How do you get more horsepower without fundamentally altering the engine? That was how turbocharging came into the picture once again. Success followed immediately in Formula 2 races in 1974, but the Alpine A442 failed to make an impact at Le Mans. Four years later though, Renault finally breached the Le Mans citadel by trouncing none other than Porsche, as the Alpine A442, driven by Jean-Pierre Jaussaud and Didier Pironi, showed the German carmaker a clean pair of heels, clocking an average speed of 210kph and a top speed of 370kph. 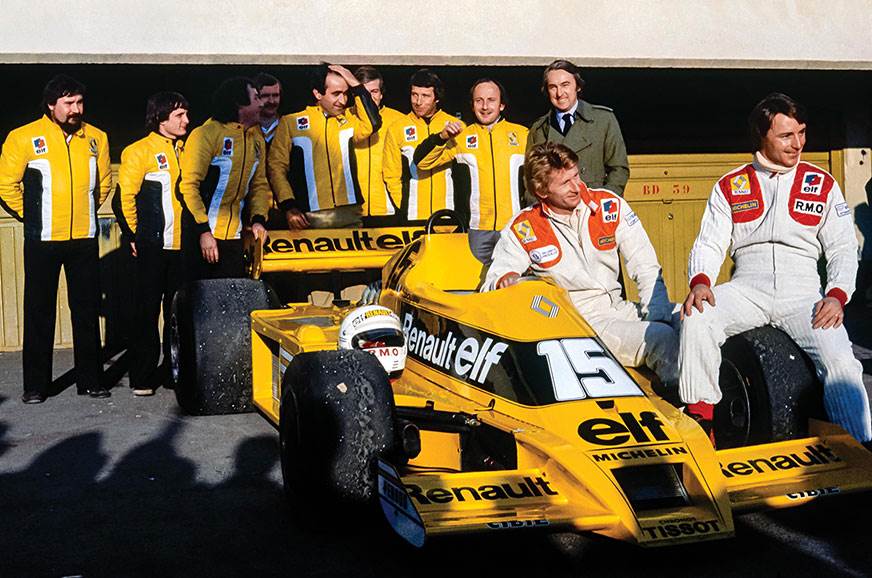 Jean-Pierre Jabouille and the Renault crew at the unveiling of the RS01 in 1978.

One of Renault’s brightest turbocharged moments in motorsport in the last century, though, was yet to come, and that happened in Formula 1.

When Renault entered F1 in 1977 as a constructor, its first Formula 1 car, the RS01, was powered by a relatively small 1.5-litre turbocharged V6. Its rivals, on the other hand, were equipped with massive 3.0-litre V8 and V12 engines. Not surprisingly, the Renault RS01 became the butt of jokes, especially when it could not finish more than 12 laps on its debut at Silverstone. The race ended when the car suffered a wrecked turbocharger and all the smoke it emitted earned it the unenviable sobriquet of the ‘Yellow Teapot’. 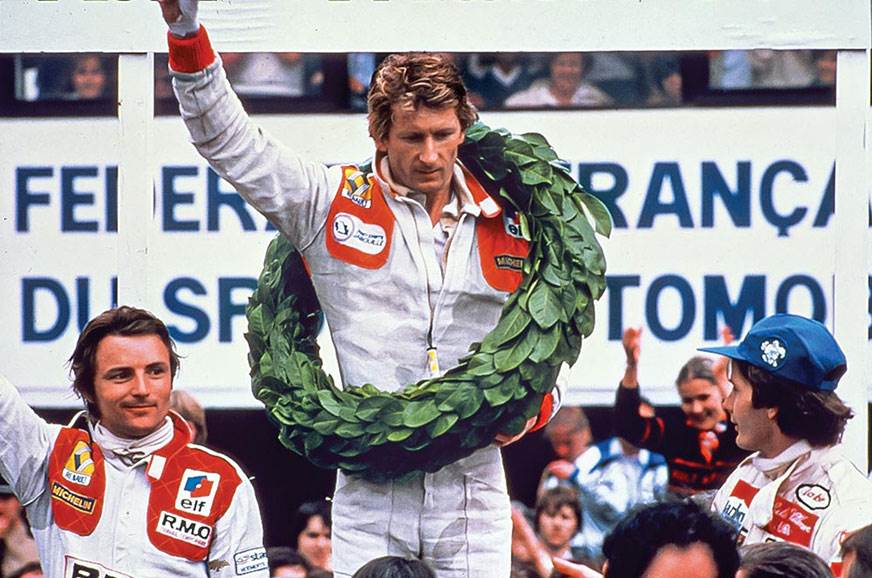 Winning big: Jean-Pierre Jabouille on the podium at the French Grand Prix in 1979.

All that changed, however, in 1978 with Jean-Pierre Jabouille at the wheel. Jabouille, a development driver and engineer, had only 49 grand prix starts and three points finishes, but he made a massive impact on motorsport. Jabouille, who had a long association with Alpine, finished fourth in the United States Grand Prix and then scored the car’s first win at the French Grand Prix. More victories followed for Renault and its turbocharged engines in F1 — 19 in all — until 1986. Meanwhile, Renault outfitted its road-going cars with turbos and made them instant classics. These included cars such as the Renault 5 Turbo, “the first mass-produced French car with a turbocharged petrol engine”. The hot hatch, unveiled in 1978 at the Paris Motor Show, had a 160hp, 1.4-litre turbocharged engine. When production began in 1980, it was only available in two colours – Olympic Blue or Grenadine Red – and very few optional extras. In 1981, its racing version felled giants such as the Lancia Stratos to win the Monte Carlo rally and the French rally championship. The car would go onto achieve notable wins in other rallies such as the Tour de Corse in the following years, and it was a force to reckon with right until 1986. 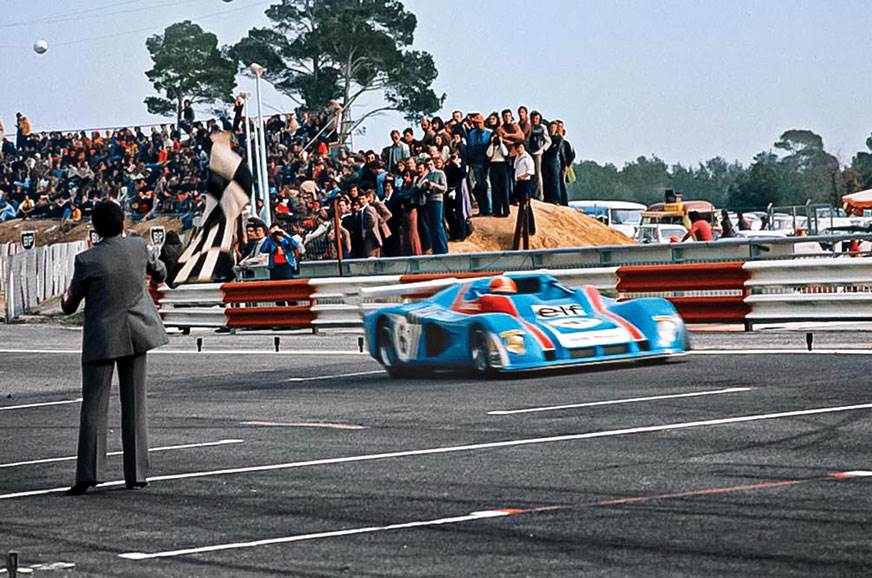 In the 1990s, as emissions laws across the world started getting stringent and environmental issues came of age, carmakers began looking for more efficiency, more mileage, and less fuel consumption. And the turbocharger was once again the solution. 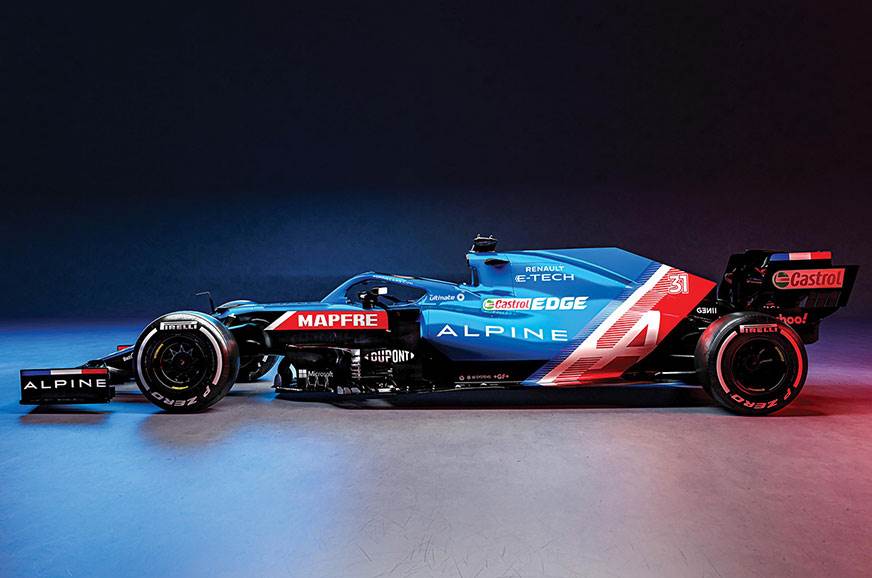 It was first used in diesel engines by Renault in the late 1990s, and the early 2000s saw a bunch of cars, including the Vel Satis and the Clio III, being equipped with turbo-petrol engines. In 2014, when turbo engines returned to F1 after 25 years, Renault was there with its Renault Energy F1 engine. This year, as it races under a new name and new colours with Alpine F1 and the E-Tech 20B 1.6L V6, turbocharging will of course be a critical part of its imminent success. Turbocharging is also one of the many factors that has put Renault in a league of its own in India. 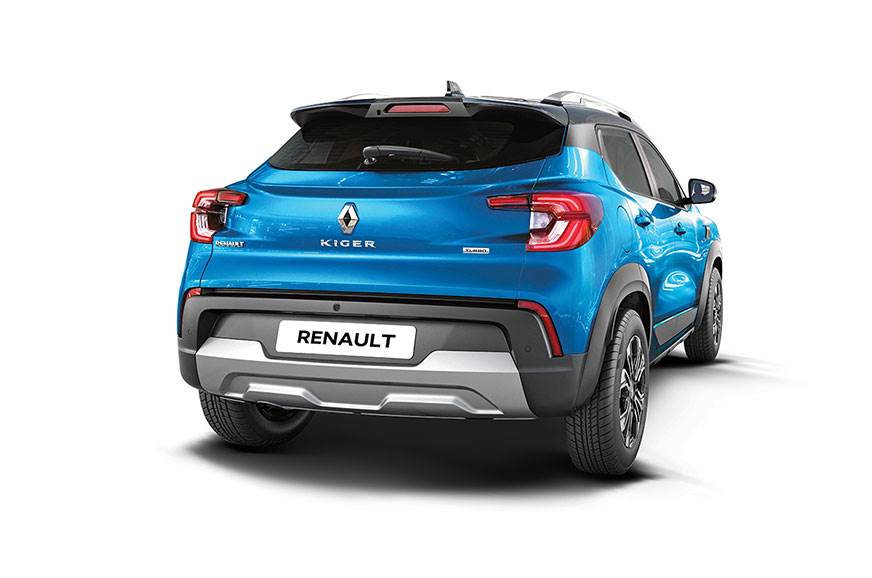 The most recent cracker from the company’s stables, the Kiger, is a case in point. Since it was launched earlier this year, the handsome Kiger has won fulsome praise for being a well-rounded automobile. And why not? India’s most affordable compact SUV delivers segment-leading roominess, storage and space; it packs in the latest technologies; and is equipped to handle various terrain, from urban high streets to open highways. And under its muscular hood, you’ll find an engine with a turbocharger. The Kiger’s 100hp turbo-petrol engine is a lively, highly responsive unit that has been rated very highly for its refinement and tractability. There are many reasons why we love it, but we especially admire how it compresses distances on the highway and sparkles at traffic light grands prix. But then, we realise, and as is evident, it’s got great genes.