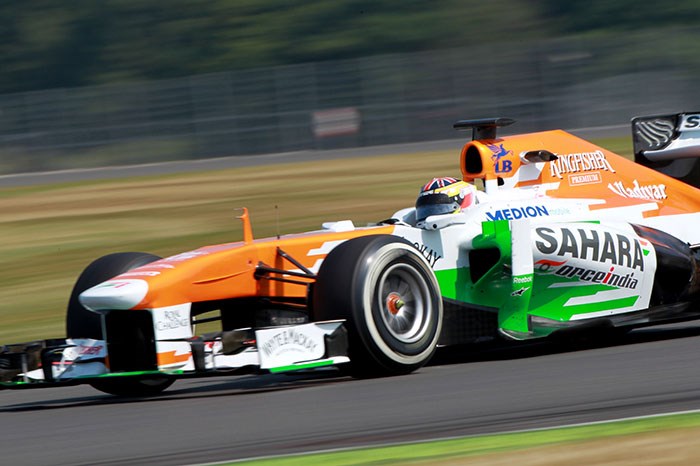 James Calado put Force India on the top of the timesheets on the opening morning of this year's Formula 1 young driver test at Silverstone.

The 24-year-old, who is being evaluated for potential Friday morning practice outings later this year with the squad, traded fastest times throughout the morning with Red Bull youngster Antonio Felix da Costa.

The fight was eventually settled in the Briton's favour, as he became the only man to dip below the 1m34s bracket with two hours of the morning still to run.

His 1m33.986s benchmark is just over half a second slower than the fastest lap of this year's British Grand Prix, set by Mark Webber.

Da Costa, in the RB9 in which Webber set that time, had gone fastest early on, and then became the first man to break into the 1m34s during a rapid, and very consistent, stint on Pirelli's soft compound.

He ended the session second, less than half a second down the road from Calado.

Sauber's Robin Frijns was one of the last drivers to go out, almost two hours after the session had officially opened.

He rose up the timesheets in the latter part of the morning however, eventually moving Sauber to third, 0.748s down on the ultimate pace.

Unlike Calado, who will hand over to Paul di Resta for this afternoon, both da Costa and Frijns will continue teting duties for the rest of the day.

Da Costa had been set to hand over to Daniel Ricciardo, but the Australian will now make his case for a 2014 Red Bull drive on Thursday afternoon after the team shuffled its testing plans.

Nicolas Prost, who will now also test on Friday in place of Kimi Raikkonen, put Lotus fourth, ahead of Alexander Rossi in the Caterham.

The American was the last man to get within two seconds of Calado.

Davide Rigon, on duty for all but Friday morning for Ferrari, was sixth, ahead of Johnny Cecotto (Toro Rosso), Tio Ellinas (Marussia) and McLaren's Kevin Magnussen.

Daniel Juncadella and Williams rounded out the morning's 10 drivers, completing just five laps and finishing more than nine seconds off the pace.