You don’t get so many chances to be in F1 anymore: Verstappen

Max Verstappen turns 17 today, and will make his Formula 1 debut in Free Practice at Suzuka on Friday. We sat down with Max at Nürburgring last month. 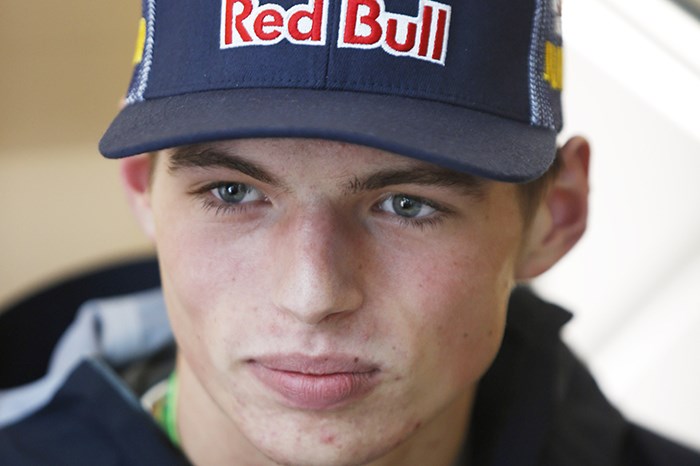 At 17 and a half next year, Max Verstappen is set to be the youngest-ever driver in F1 history. Saptarshi Shukla caught up with the exceptional talent at Nürburgring.

Tell us a bit about your early career. Born in a family like yours, racing must run in the blood!

I was four when I saw a younger kid driving go karts. I called my dad and said I wanted to drive too. The first thing he said was that you aren’t allowed to till you’re six, but I kept trying, and in the end, we started when I was four and a half.

In the beginning I was just practicing, with my dad showing me the good lines, and at seven, I had my first race in the local championship. I switched to the European championship in 2010; you’re only allowed to do that if you’re going to turn thirteen in the same year.

It is said that there is quite a bit of luck involved when it comes to consistently succeeding in karting — the grids are massive and potential for things to go wrong is high. You won five out of the six karting championships you entered in 2013. How did you manage to get everything right almost all the time?

Of course you need some luck, but not everything is luck — you need to be good to win it anyway. I think it (luck) plays a bigger role if it’s a single-event championship, but if it is a season, it’s not luck but consistency. I think, most championships are won over the course of several events, so it’s a better view of how good you are. Sometimes on a single-weekend you have people who get everything right, and they might even win a race, but they won’t be fast in a championship.

Coming to cars, what made you think — let’s jump into an F3 car in the FIA European Championship — one of the most competitive junior categories, right after karting?

Well, I did a lot of testing in Formula Renault last year, and was then invited by Motorpark (a German F3 team). They were really pushing to put me in an F3 car but we were not sure as everyone else in karting had started with the two-litre cars (Formula Renault). So we just decided to do the (F3) test and see. And within six laps I was really fast; I actually surprised myself but it just felt really good in the car. Then, we were thinking more about F3 than Renault.

And when exactly was this?

November. And it was quite late so we didn’t have the time to sign a contract with a good team. At  the end, we went with Van Amersfoort, which was a bit risky of course, as they came in only last year but they were really pushing and wanted to win, which is also important in a team.

And, of course, they ran your father as well back in the day.

Of course, we knew them a bit but still you don’t know how good the car will be. But this year we have seen that we have had a really good car. For example, like here at Nurburgring.

You said you started testing with a Formula Renault, when exactly was that?

I started in October — in the end we had about 20 test days since then.

Going from karting to single-seaters, what were the first things you had to change and adapt to?

The view. I think the view, because you’re sitting in a completely different position, but the rest was quite good. So, it wasn’t a big change for me to be honest. You just have to do some laps and in the end it was not so hard to adapt.

Also, while racing in a pack, you have a lot more drivers involved in karting than in cars?

Yes. I think that was also one of the biggest differences (in cars) because when you’re close to someone you get understeer so you lose the front-end grip. So yes, that cost me some races. I made some mistakes in the beginning of the year, but again its better that it happens now than in the future, right? As I always said, this was my learning year but looks like we’re doing better than just learning maybe. (laughs).

You have done fabulously well on your debut in cars, but for others it hasn’t been the case — like your countryman Nick De Vries (two-time world karting champion). He struggled in Renault (for almost two seasons) so what’s different here?

I honestly don’t know. I adapted quite well I think, and obviously it is known that if you do well in karting it is not always the case in cars — like with Nick; he took some time and now he’s doing well. I also think the two-litre is a tough car to drive — the tyres are quite tricky and they’re only good for two laps. So if you have a problem in qualifying with yellow flags or something, your entire weekend is affected. So that is why I was more positive about F3, because the tyres last five-six laps and you have 33 races instead of 14 in Renault Eurocup. So everything about the F3 is really good at the moment.

I have been told that the driving style between F3 and the Renault championships (F-Renault, GP3, GP2) is quite different, and the latter is more tuned towards preparing drivers for Formula 1.

Yes, that is true as the F3 cars have a lot of downforce and not much horsepower, so you have to be more fluid and smooth — carry more speed in the middle of the corner — whereas GP2 and GP3 have a lot of horsepower but less grip. Hence, you need to drive in a V-style (more focus on the corner exit than mid-corner speed).

Now you’re a Red Bull Junior, and all set to be the youngest driver in the history of Formula 1. What do you think is the ideal age — do you consider yourself ready for F1?

Obviously! If I get the chance, I will definitely take it because I think you don’t get so many chances to be in F1 anymore. At the moment, I’m still focussing on F3, which is the main priority.

Your father remarked that he debuted with a wrong team, against the wrong teammate (Benetton, Schumacher). Are you comfortable lined up against Daniil Kvyat at Toro Rosso?

At the moment, first, I think Kvyat is not Michael Schumacher! And I know from my father that it was not all fair inside the team (Benetton) at the time, and that can’t happen anymore. These days they can check if everything is right on both cars. I think my dad (debut), for sure, was at the wrong moment and I don’t think that will happen anymore as it is more clear and fair for both drivers nowadays.