Ogier's title success moves him to fourth on the all-time list of WRC champions, just behind Juha Kankkunen and Tommi Makinen. 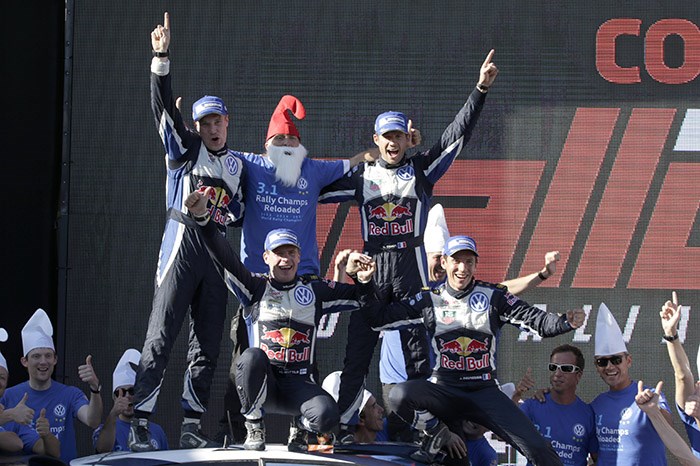 Sebastien Ogier clinched his third straight World Rally Championship with his seventh victory of the 2015 season, ahead of Volkswagen team-mate Jari-Matti Latvala, on Rally Australia.

Ogier's title success moves him to fourth on the all-time list of WRC champions, just behind Juha Kankkunen and Tommi Makinen, who both have four championships to their names, and also secured another manufacturers' crown for VW.

As is often the case Ogier suffered initially with being the first car on the road, and was down in eighth on Friday morning, before pushing on to third by the end of the day.

VW driver Ogier moved into the frame for the win with Latvala and Kris Meeke on Saturday morning and snatched a slim lead of 0.3 seconds over Meeke on the final stage of leg two.

From that point on Ogier never looked like letting go. The Frenchman won seven consecutive stages, including the final powerstage, to finish the rally 12.3s ahead of Latvala.

Late drama for Latvala before the powerstage almost gifted second place to Meeke.

The Finn suffered a broken alternator belt prior to the start but he was able to fix the problem thanks to a spare.

This allowed a relieved Latvala, who finished runner-up on the powerstage, to secure second place by a substantial margin.

Long-time leader Meeke's charge began to unravel on Saturday's Valla night stage,which drivers described as dangerous, and by Sunday afternoon he found himself way off the pace of Ogier and Latvala in third and falling into the clutches of Andreas Mikkelsen.

But Mikkelsen's chances of overhauling Meeke took a massive blow before the final two stages. He was handed a 10s penalty for turning up to midday service one minute late, which ended any hope of completing an all VW podium.

New Zealander Hayden Paddon enjoyed a lot of support throughout the weekend, and he didn't disappoint fans as he secured fifth, complete with two impressive stage wins on Saturday morning.

M-Sport's Ott Tanak recovered from some minor incidents on Friday that dropped him back from an early third to finish sixth overall, leapfrogging Hyundai duo Thierry Neuville and Dani Sordo. The Spaniard had led on Friday morning before drifting off the pace, with brake problems a factor.

A downbeat Elfyn Evans, delayed early by a puncture on SS4, was unchallenged in ninth ahead of WRC2 winner Nasser Al-Attiyah who completed the top 10.

Citroen substitute Stephane Lefebvre, replacing the injured Mads Ostberg, got some first-on-the-road experience after he broke his suspension on a rock through Newry Long on Friday when running ninth.