The Finn dominated his home event early on, escaping from the chasing Ogier and Kris Meeke, establishing a 31-second lead halfway through the rally. 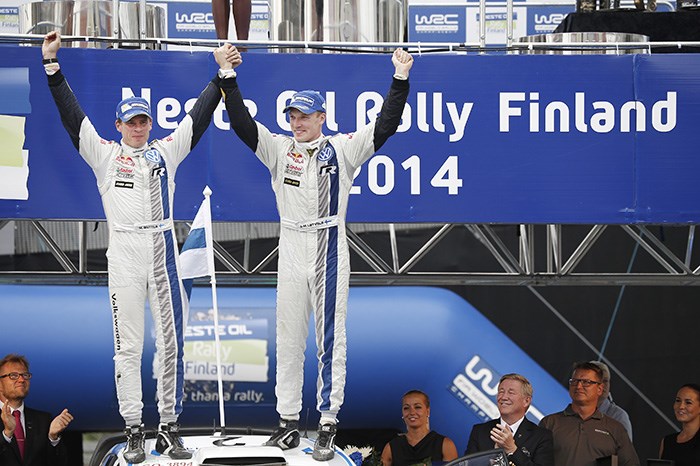 The Finn dominated his home event early on, escaping from the chasing Ogier and Kris Meeke and establishing a 31-second lead halfway through the rally.

Then a hard impact in a rut on Saturday afternoon damaged the VW Polo's brakes, leaving Latvala without stopping power on his right-front wheel for three and a half stages.

Ogier, who had briefly lost second to Meeke on Friday afternoon before regaining ground when no longer first on the road, charged back into victory contention, beginning Sunday's three-stage decider just three seconds behind Latvala.

There was nothing to choose between the VW duo through the final leg, with Latvala bringing his lead back up to five seconds on Sunday's opener, before Ogier took 1.3s back on the next stage.

Ogier was faster by one tenth on the Powerstage to claim maximum bonus points, but Latvala had the huge satisfaction of taking the first home win on Rally Finland since his own 2010 triumph, as he won by a final margin of just 3.6s.

Meeke ended up a lonely third after a breakthrough drive that will hugely boost his chance of retaining his Citroen WRC seat for 2015.

Andreas Mikkelsen made a cautious start to the event in the third VW before coming through to fourth, ahead of Mikko Hirvonen in the lead M-Sport Ford. Hirvonen challenged Meeke for a while before losing momentum after a Friday spin.

Mads Ostberg was in the thick of this group too, until an impact with a stone on Saturday damaged his Citroen's rollcage.

The same fate had befallen Thierry Neuville's Hyundai on Friday. The Belgian was never the top i20 runner in Finland, as initially his local team-mate Juho Hanninen flew.

Hanninen chased Meeke for third on the opening stages and set some blistering times, only to then roll and fall to 12th.

He got back up to seventh, but that seemed to be his limit as rookie team-mate Hayden Paddon matched his pace while holding an excellent sixth. Power steering failure on Sunday morning hampered Paddon, though, and he dropped to eighth behind Hanninen and Elfyn Evans.

European Rally Championship title contender Craig Breen was on course for ninth on his latest WRC apperance until a heavy landing over a jump on Sunday's first stage left him in severe back pain and unable to continue.

Robert Kubica held ninth initially before crashing on Friday morning. He rejoined under Rally2 and had a smooth run through Saturday and Sunday, albeit outside the overall top 30 thanks to his penalties.

Karl Kruuda claimed a dominant WRC2 victory after dramas for Jari Ketomaa and Ott Tanak, while Martin Koci triumphed in the Junior class by a huge margin.