Webber had a dominant weekend in Spain. 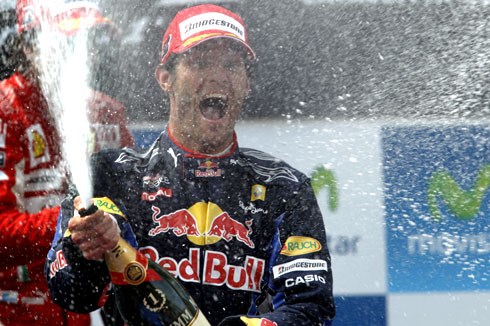 Mark Webber completed a dominant weekend for Red Bull at the Spanish GP by making victory in the race look easy.

The Australian driver led the field away from pole position and was never headed; he frequently posted fastest laps, giving the indication that he had more pace in reserve, if it were needed.

Lewis Hamilton looked set for a strong second place - having passed Webber's team-mate Sebastian Vettel during the pit-stops - but a puncture forced the McLaren driver into the tyre wall with only a lap remaining.

By that point Vettel had already eased off due to concerns about his brakes, so Hamilton's demise allowed local hero Fernando Alonso to claim second spot for Ferrari. Vettel's early pace was enough to allow him to cruise into third, ahead of Michael Schumacher, who had spent much of the race fending off reigning world champion Jenson Button.

The result close up the top of the driver's and constructor's championship tables. Button still leads the driver's series, but he is now just three points clear of Alonso, with Vettel a further seven points adrift.
The teams situation is closer still; McLaren tops the standings, three points ahead of Ferrari, with Red Bull - widely acknowledged as the fastest team in the field - a further three points behind.