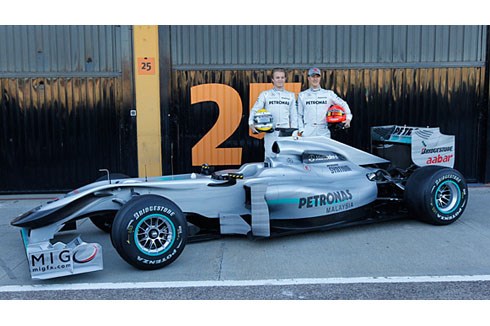 Mercedes-Benz unveiled its W01 in the Valencia pit lane on Monday morning, ahead of the first pre-season Formula 1 test at the Spanish track.

The German car manufacturer had launched the colour scheme of the car in Stuttgart last week, but it waited until shortly before track action began on Monday to show the world the car that will carry the title hopes of Michael Schumacher and Nico Rosberg.

The car features a radical version of the now typical Red Bull Racing RB5-type V-nose configuration, as well as a small fin on the engine cover.

Rosberg will give the car its first shakedown on Monday morning, with Schumacher due to make his return to the cockpit of a contemporary F1 car for the first time since confirming his F1 comeback.

The Valencia test features seven of the current teams - with Red Bull Racing and Force India all opting to skip this week's running to give themselves more preparation time for 2010.