VW Vento Cup set to switch to MRF Tyres for 2016

The series currently uses JK Tyres for its premier one-make category – an association that goes back six years. 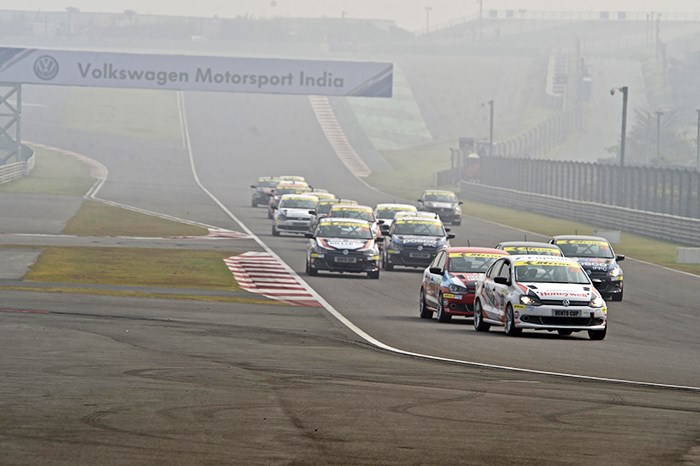 The VW-backed single-make championship Volkswagen Vento Cup is set to switch to MRF rubber for its next season, Autocar India has learnt.

The series currently uses JK Tyres for its premier one-make category – an association that goes back six years when Volkswagen made its debut in Indian motorsport with Polo Cup India in 2010.

MRF currently runs and organises the Formula Ford 1600 series – a part of the national racing championship apart from the international F2000 championship which uses a Dallara F3 chassis and a two-litre Renault engine. It has also been manufacturing and supplying slick tyres for tin-top racers – experience that will come in handy for this prospective collaboration.

If the VW-MRF association is confirmed, the Vento Cup is likely to be a part of the national championship weekend, along with the F1600 and Saloon classes – subject to the results of the bidding process for various championship under the aegis of the Indian ASN FMSCI.

Volkswagen Group and MRF have had a long working relationship outside India, with factory-supported Skoda Fabias running on MRF rubber in the Asia Pacific Rally Championship (APRC) since 2012.

Despite Volkswagen having heavily invested in technology overhaul over the years, tyres have repeatedly been deemed as the weak link in the package which features high-power front-wheel drive cars.

Having debut with 1.6-litre TDI engines with manual transmission, the Polo Cup underwent a major overhaul in 2012 when it switched to a 1.2-litre TSI petrol engines mated to DSG gearboxes producing 180bhp and considerably higher torque output. The package ran for three years before a switch to Vento was made for the 2015 season.

But at every step, the gains made in terms of lap time failed to showcase the step forward made by the German manufacturer as JK’s rubber was said to be lacking in performance required to extract the best out of the package from the outset of the Polo Cup. Over the years, several benchmark tests with European brands like Dunlop revealed a difference of over four seconds per lap around the 3.7-km Chennai circuit.

A venue where no JK-affiliated events have taken place for over three seasons now, a collaboration with MRF will also allow Volkswagen to return to Chennai and thus have presence at all three racing facilities in India viz. MMSC race track in Chennai, Kari Speedway in Coimbatore and Buddh Circuit in Greater Noida. For the past three years, the Polo/Vento Cup has been held only at Kari and Buddh.

Watch this space for what is likely to be one of the most positive developments in Indian motorsport for a long time!