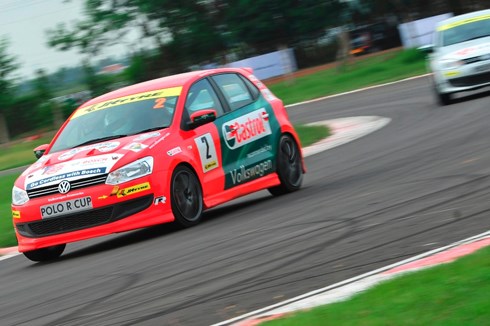 Vishnu Prasad dominated proceedings in an action packed race to claim the top honours in the first Race of round 3 of the JK Tyre Volkswagen Polo R Cup 2011 at the Irungattukottai Race Track. He was followed by Ajay Kini with and Rahil Noorani.

The cars were on wet tyres on the dry track with rain expected during the race but the rain held off during the race. Vishnu had a great start and managed to pull away from the pack from the first lap. Behind him, Ajay Kini moved into second position with Rahil Noorani and Oshan Kothadiya battling closely for 3rd position. Vishnu extended his lead to 8 seconds before the safety car came out on the seventh lap as Polo R Cup rookie driver Varun Das toppled over in one of the tricky corners of the track which had many wet patches. Vishnu managed to keep his lead at the restart and cruised to victory with Ajay and Rahil finishing behind him.

Thrilled with the result, Vishnu Prasad said, “Starting from pole position was always going to be an advantage and I am extremely happy with my race pace today. It is always nice to win in these conditions and these are very vital points at this stage of the championship. When the safety car came out I thought that I would lose my lead but I kept a cool head and maintained the lead. So far it is turning out to be a good day for me.”

Once in the lead, Avdumber never looked back, increasing the difference between him and the rest of the pack by the lap. He raced his way to the checkered flag for his first ever Polo R Cup victory. Prateek, also on the podium for the first time crossed the line almost six seconds behind, defending his place from Oshan Kothadiya Oshan Kothadiya. Shock retirement of race one winner and championship leader Vishnu Prasad was another talking point of the race.

Visibly elated with his performance Avdumber said, “This is my best race so far in the season. My focus was on the front and keeping the race clean. I was not able to capitalise on my second position on the grid in the first race but I am very happy to win the second race today.“

Prateek said “I had a good strategy and was able to execute it really well which helped me to clinch the 2nd position on the podium. I had a lot of fun this afternoon and I am happy to see that my hard work has  paid off this weekend.“