Prasad clinched the title in race two of the season finale 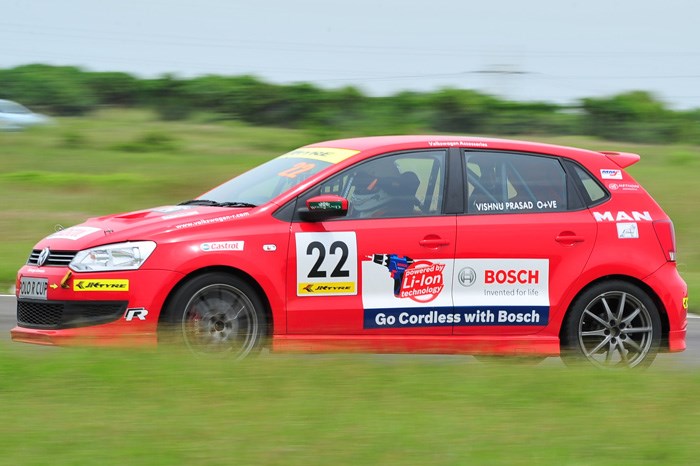 After a season filled with ups and downs, Chennai lad Vishnu Prasad finally clinched the Polo Cup title in race two of the season finale of the 2011 JK Tyre VW Polo-R Cup at the Chennai circuit. Going into the final race, the championship was anybody’s for the taking with the 17-year old in close contention with Rahil Noorani and Oshan Kothadiya among others. Noorani went out of contention early on after an on-track altercation saw him left him with a partially-dislodged rear bumper, effectively capping his title chances for what had been an incredible rookie season for the Mumbai driver.

This left Prasad and Kothadiya in contention, and while the latter had a position advantage early on, Prasad managed to make a brave move stick and incredibly still managed to hold the Pune driver off for the remainder of the race despite being boxed in by cars running ahead. Throughout the 15 tours of the short-loop of the Chennai circuit, the gap was never constant as Kothadiya tried hard and some more, making a couple of lunges into the braking zone at turn two – but only managed to distance himself from Prasad.He continued unfazed and took the chequered flag with his window rolled down and fist pumping the air – knowing well he had done enough this time, having lost out in a four-way title showdown at the 2010 season finale.

Prasad will now follow the footsteps of the likes of Aditya Patel, whose second campaign in the Scirocco Cup netted him fifth place in the overall standings and is set to test with the Audi Le Mans Series team in the coming week, giving him a chance to get behind the wheel of an Audi R8 GT race car. So even though he has achieved a lot for his tender age, Prasad knows well that he has to make the most of this given opportunity and do well enough to move up the racing ranks at a rapid pace.