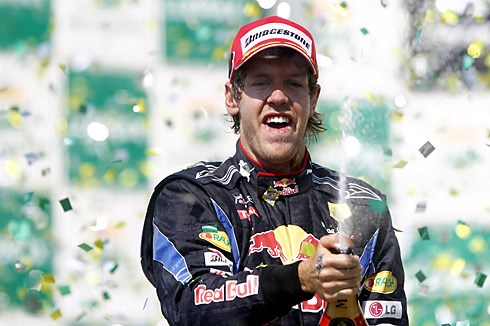 Sebastian Vettel ensured that the title fight will go to Abu Dhabi by beating Mark Webber and Fernando Alonso to victory at Interlagos, Brazil.

Vettel took the lead at the start of the race and never allowed Red Bull team-mate Webber a look in. Webber's second place clinched the constructors' title for Red Bull, but Fernando Alonso's third limited his loss in the points table.

Pole winner Nico Hulkenberg's time in the sun was short-lived, as he was out-dragged to the first corner by Vettel and then demoted to third by Webber at Turn 4. It took Alonso another six laps to get by the Williams, thanks mainly to some skilled and spirited defence by Hulkenberg once he settled into the race. By the time Alonso had clear air he was seven seconds behind Webber, and even then lapping half a second slower.

Vettel and Webber were freed from the start right up until the safety car was called out when Vitantonio Liuzzi crashed at Turn 2 with 20 laps remaining. Vettel had then lapped Robert Kubica between himself and Webber. From there on he had no trouble managing the gap to his team-mate.

Behind, Webber had to see off a threat from the closing Alonso in the final laps as the Spaniard shared fastest laps with the Red Bull drivers following the safety car. In the end, Alonso couldn't get close enough and settled for third and taking his championship lead to Abu Dhabi.

Hamilton was fourth and within range of Alonso at the finish, another to benefit from the late safety car. He was complaining of grip problems throughout the race and was delighted to take the opportunity of a free pitstop when the safety car came out. Hamilton is now 24 points behind Alonso with 25 available in Abu Dhabi.