The reigning champion outpaced challenge from McLarens and teammate Webber to secure his first pole of 2012. 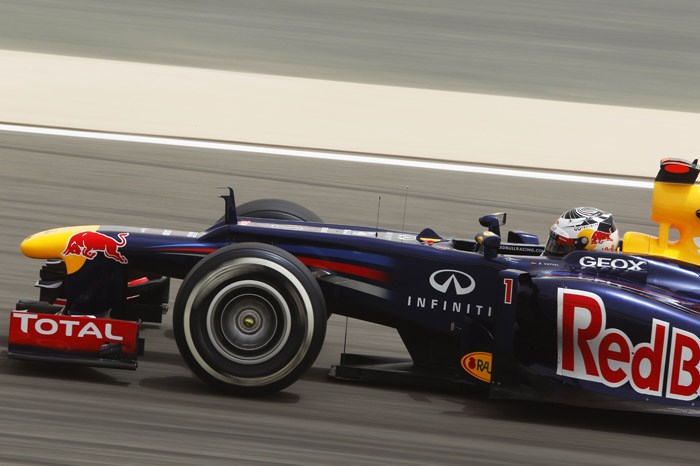 Sebastian Vettel returned Red Bull to pole position as the world champion rediscovered his qualifying form and took the top spot on the grid for the Bahrain Grand Prix.

Red Bull briefly looked set for a front row sweep until points leader Lewis Hamilton got between Vettel and Webber.

Despite its practice pace, Shanghai winner Mercedes had a disappointing session. Nico Rosberg could only qualify fifth, and his team-mate Michael Schumacher did not even get beyond Q1.

McLaren had been quickest early in Q3, but Red Bull had more speed in hand, and a 1m32.422s lap from Vettel gave him pole by just under a tenth of a second, as Hamilton slipped through to demote Webber to third. Jenson Button completes row two in the second McLaren.

Rosberg only made one Q3 run and was 0.4 seconds off the pace in fifth.

Daniel Ricciardo gave Toro Rosso huge encouragement as he stormed to a career-best sixth on the grid, in front of Romain Grosjean's Lotus and Sergio Perez's Sauber.

Fernando Alonso got Ferrari into the top 10, then elected not to do a Q3 flying lap, as did Paul di Resta - who got Force India into the pole shoot-out despite having missed out on Friday afternoon practice. The pair will share row five, with Alonso five places ahead of Ferrari team-mate Felipe Massa.

Schumacher's exit in Q1 was the shock of the session, and was down to both a problem with the Mercedes and a supreme lap from Caterham's Heikki Kovalainen.

With track conditions rapidly improving, early Q1 times did not prove sufficient. Both Red Bulls flirted with elimination, as did Perez, but in the end it was Toro Rosso's Jean-Eric Vergne - for a third straight race - and Schumacher who ended up on the wrong side of the cut-off. A DRS problem compromised Schumacher's session, and he did not get out for a final run. Vergne may face further trouble after the session as replays suggested he missed a call to the weighbridge in Q1.

Schumacher had still looked safe for Q2 until Kovalainen made a massive improvement on his final Q1 lap, putting in a time that not only got him ahead of the Toro Rosso and Mercedes, but to within a tenth of McLaren and Ferrari, as he outpaced team-mate Vitaly Petrov by a second.

Schumacher was not the only world champion making an early departure from qualifying, as Grosjean's progress into Q3 came at the expense of Lotus team-mate Kimi Raikkonen, who will start 11th.

Kamui Kobayashi (Sauber) and Nico Hulkenberg (Force India) could not match their team-mates' form and were 12th and 13th.

It was a tough session for Williams too, with Bruno Senna only 15th and a KERS issue preventing Pastor Maldonado - who was already facing a five-place gearbox change penalty - from running in Q2.

At the back, Marussia was nearly three seconds off Kovalainen's pace, as Charles Pic outqualified team-mate Timo Glock for the first time - the German ending up behind Pedro de la Rosa's HRT as well in 23rd place.