Vettel on pole in Australia 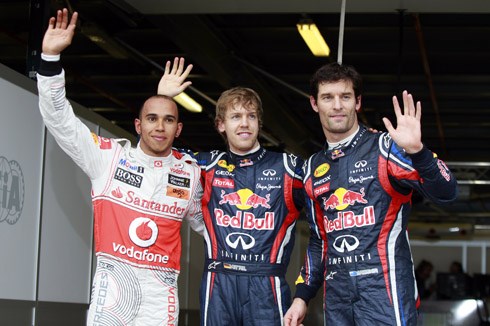 The Red Bull driver was comfortably quickest in Q1 and Q2, then 0.8 seconds ahead of the rest of the field after the first Q3 runs were complete. That 1m23.529s effort was sufficient to secure the 16th pole of Vettel's Formula 1 career, though he ended the session with a 1m23.6s for good measure - also quicker than anyone else could manage.

Lewis Hamilton denied Red Bull a front row sweep by getting his McLaren up to second in the final moments, pushing Mark Webber back to third.

Jenson Button completed the top four in the second McLaren, ahead of Fernando Alonso in the best of the Ferraris. His team-mate Felipe Massa was only eighth after a troubled session that saw him only just make it out of Q1, then spin on his out-lap at the end of Q3.

Vitaly Petrov took a superb sixth for Renault, while the Mercedes resurgence was not as dramatic as the final test had indicated. Nico Rosberg was seventh and Michael Schumacher missed out on a Q3 slot by the agonising margin of 0.089s after a poor run to his final Q2 lap.

Sauber and Toro Rosso showed their winter improvements were real as Kamui Kobayashi and Sebastien Buemi completed the top 10, with their team-mates Jaime Alguersuari and Sergio Perez not far off Q3 pace in 12th and 13th.

Force India's Paul di Resta and Williams's Pastor Maldonado will start their maiden grands prix from 14th and 15th respectively, ahead of their team-mates after mistakes by Adrian Sutil and Rubens Barrichello. Sutil miraculously avoided the wall in a spectacular spin out of the final corner, triggered when he activated his wing flap while hitting the kerb, unsettling the Force India.

Barrichello's error was more embarrassing: he touched the grass under braking for Turn 3 and spun into the gravel before he could set a Q2 time.

Fellow veteran Nick Heidfeld's season also got off to a poor start. He was unable to get the Renault out of Q1 and will start 18th.

Last year's new teams have so far failed to show any progress, with Lotus back in its 2010 position behind the rest of the field, but ahead of the Virgins, which were at least quick enough to make the 107 per cent cut today.

However, it wasn't smooth sailing for HRT though as Narain Karthikeyan and Tonio Liuzzi failed to make it under the bracket time with the final decision of allowing them to race pending with the stewards.