McLaren's Lewis Hamilton will join Vettel on the front row, having grabbed second from Fernando Alonso's Ferrari, who will start third. 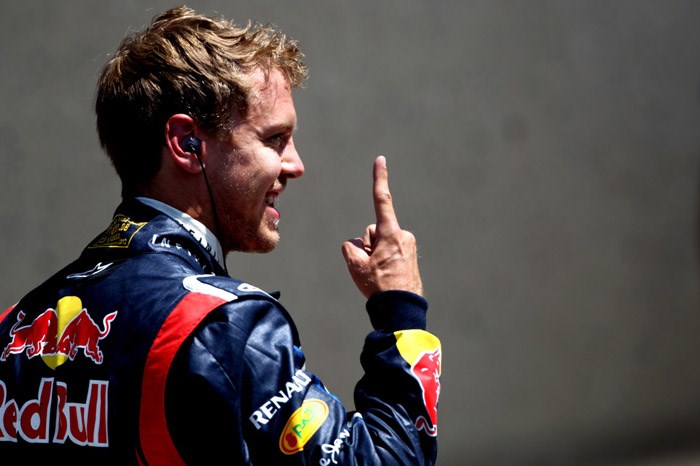 The Red Bull driver's cushion was surprisingly ample given that just 0.8s had covered 17 cars in Q1 and the whole Q2 field had been within a second.

Vettel started Q3 on provisional pole with a 1m13.905s and was not headed thereafter, as he improved to 1m13.784s on his second run to put himself further out of reach.

McLaren's Lewis Hamilton will join Vettel on the front row, having grabbed second from Fernando Alonso's Ferrari with his second Q3 attempt. Alonso looked like a pole threat until a disappointing final sector on his best lap left him to settle for third.

Mark Webber completes the top four in the second Red Bull, followed by Nico Rosberg in the leading Mercedes - four places ahead of team-mate Michael Schumacher - and Felipe Massa's Ferrari in sixth.

Romain Grosjean reached Q3 for Lotus and claimed seventh but his team-mate Kimi Raikkonen did not make it into the pole shoot-out, only managing 12th in Q2.

Force India's Paul di Resta made his second Q3 appearance of the year and earned eighth on the grid.

Jenson Button avoided a third consecutive Q2 elimination, but only just. The McLaren driver sat 10th at the end of the second segment and looked in grave danger of being edged out by Pastor Maldonado, only for the Spanish GP winner to spin his Williams into the wall at the final chicane, leaving him 17th. Button will start 10th, having spoiled one set of super softs by locking up.

The second Williams of Bruno Senna was only one place ahead of Maldonado in 16th. Also out in Q2 were both Saubers - with Kamui Kobayashi just 0.008s shy of a Q3 spot in 11th and Sergio Perez back in 15th - the Force India of Nico Hulkenberg and the Toro Rosso of Daniel Ricciardo.

After his morning practice crash, Ricciardo's team-mate Jean-Eric Vergne's underwhelming Saturday continued as a mistake on his best lap saw the Frenchman exiting qualifying in Q1 for the fourth time in his first seven grands prix. Not only was he knocked out, but Vergne was outqualified by both Caterhams and will start 20th.

In another Q1 surprise, Pedro de la Rosa put his HRT 21st on the grid, beating both Marussias.