Vettel eases to victory in Malaysia 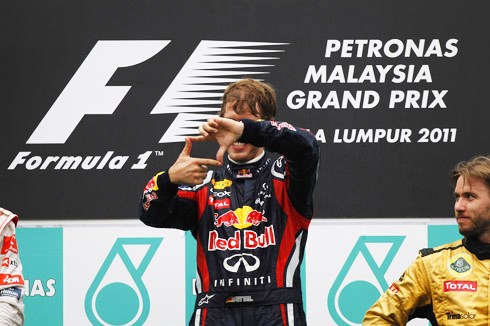 Sebastian Vettel remains unbeaten in the 2011 Formula 1 season after taking another Malaysian Grand Prix victory, despite running without KERS on his Red Bull for much of the race.

The world champion was not able to dominate, but had enough speed to stay clear of his rivals in a very competitive race at a dry Sepang.

Jenson Button took second for McLaren, with his team-mate Lewis Hamilton only seventh after tyre troubles.

Nick Heidfeld gave Renault its second podium in as many races as he held off Mark Webber for third after a complicated afternoon for the second Red Bull. The Ferraris of Felipe Massa and Fernando Alonso were fifth and sixth after the latter damaged his front wing clipping Hamilton's car.

Vettel seemed to be handed an easy afternoon at the start, for while he clearly held the lead through a busy first corner, the Renaults of Heidfeld and Vitaly Petrov surged down the outside to move from sixth and eighth on the grid to second and fifth, either side of Hamilton and Button's McLarens, and ahead of Massa and Alonso's Ferraris.

It was worse still for Webber - his KERS already seemingly not working, the Australian plunged to ninth and was passed by a combative Kamui Kobayashi further around the lap.

Heidfeld did not lose too much time to Vettel, though, the Renault staying within seven seconds of the leading Red Bull through the first stint. When Heidfeld then lost ground in the first stops, that released the McLarens and the rapidly-recovering Alonso to start gaining on Vettel.

While Hamilton got Vettel's lead down to under four seconds, Alonso passed Button for third into the first corner early in the second stint and started closing in as well.

Vettel then looked even more vulnerable after the second of the leaders' three pitstops when his team informed him that he could no longer use his KERS. But his pursuers' hopes of taking advantage of this were quickly dashed - even without the energy boosting system Vettel managed to pull clear during this stint, stretching his lead over Hamilton back up to eight seconds.

It was Button who started making progress in the second half of the race, taking third back from Alonso in the second pitstops, and setting some strong times thereafter, then getting second from Hamilton at the next pit sequence when a left-front issue slowed the latter slightly.

As Button then started inching up towards Vettel, Hamilton struggled badly for pace in the final hard-tyre stint. Alonso was soon all over the back of him, but with his DRS not working, the Ferrari had to be creative to try and pass. On lap 45 Alonso got too close through Turn 3, clipping the rear of the McLaren and damaging his front wing, forcing an extra stop.

Hamilton was then caught by first Heidfeld, who slipped past into Turn 1 using the DRS with four laps to go, then the recovering Webber - who despite being on a four-stop strategy and still without KERS, managed to get back up with the leaders. He grabbed fourth when Hamilton slid off the road briefly, and the McLaren gave up and pitted for a fourth time immediately afterwards.

Vettel kept Button at arm's length and came home to win by 3.2s, with Heidfeld resisting everything Webber threw at him over the final laps to claim third.

Alonso charged back onto Massa's tail but had to settle for sixth behind his team-mate, with Hamilton only seventh after his additional stop.

Petrov was set for seventh until a wild moment on lap 53, when he ran wide and tried to rejoin flat-out over the grass, until to hit a deep and send his Renault high into the air, breaking its steering.

Kobayashi managed to make a two-stop strategy work to take eighth, after several spectacular battles with Michael Schumacher, who was ninth on a tough afternoon for Mercedes. His team-mate Nico Rosberg fell into the midfield on lap one and never recovered, finishing 12th behind the two Force Indias, as Paul di Resta grabbed another point with a mature drive in his second grand prix.

Further back, Lotus got closer to the established midfield pace than ever before as Heikki Kovalainen finished 15th behind the Toro Rossos. Both Williams retired, as did Melbourne hero Sergio Perez after the Sauber sustained damage from running over debris.