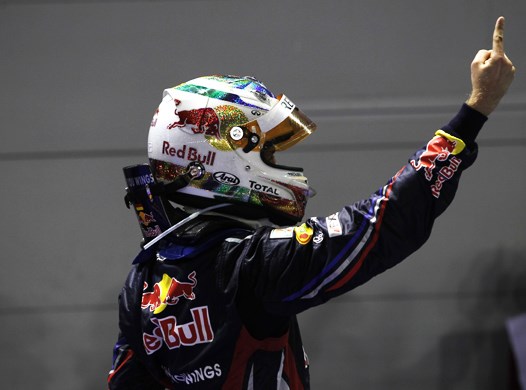 Sebastian Vettel moved to the brink of a second title by winning the Singapore Grand Prix, but Jenson Button's runner-up finish meant the German was one point shy of the championship lead he required to wrap things up for 2011.

Vettel utterly dominated the majority of the race. The Red Bull man was a second per lap faster than his pursuers at first, and though the pack closed up with a mid-race safety car after Michael Schumacher clipped Sergio Perez and was launched into a violent accident - from which he emerged unhurt - Vettel had a cushion of backmarkers behind him at the restart and was eight seconds clear again after just one lap.

McLaren driver Button started closing in with some very rapid late laps, but Vettel always appeared to have everything under control as he clinched his ninth win of the season.

Button had claimed second with a quick start, while Vettel's front row partner team-mate Mark Webber got away slowly. Lewis Hamilton challenged Webber down the inside in the second McLaren but ran out of space and fell as low as eighth, while Fernando Alonso took his Ferrari around the outside of everyone to grab third from fifth on the grid.

Webber twice passed Alonso on the road, having to get back ahead after the Ferrari reclaimed third in the first pitstops following an on-track exchange. But a bold dive into the Turn 10 chicane amid traffic on the restart lap secured Webber's third place and he pulled away thereafter.

Hamilton had a highly eventful run to fifth. He quickly recovered from being wrong-footed on the first lap but then clipped Felipe Massa while racing with the Ferrari immediately after the first stops. The McLaren picked up both wing damage and a penalty, while Massa was left with a puncture.

A fightback charge from Hamilton took him from a post-drive-through 15th to fifth in the end, helped by the safety car closing him onto the lead pack again. A string of DRS passes got him back into the top five, though having to pit for another set of tyres while those behind him did not meant Hamilton had to make a lot of his moves twice before his top five finish was secure.

Paul di Resta secured the best result of his Formula 1 career so far in sixth for Force India. A very long first stint and the ability to make his second and final stop just as the safety car came out got him ahead of Mercedes' Nico Rosberg and the second Force India of Adrian Sutil.

Massa fell to 20th following the clash with Hamilton, before clawing his way back through to salvage some points in ninth.

Perez's Sauber was undamaged in the incident with Schumacher, which happened when the Mercedes was coming back through after a pitstop, and he finished 10th.