The Ferrari driver passed Hamilton for the race lead just before the safety car was called out due to a massive first-corner crash. 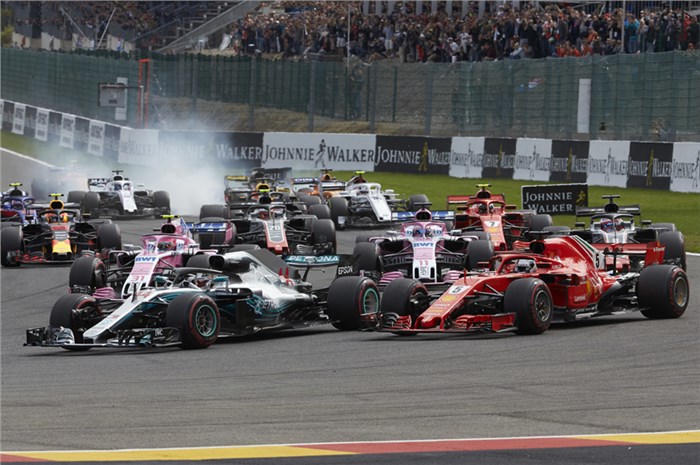 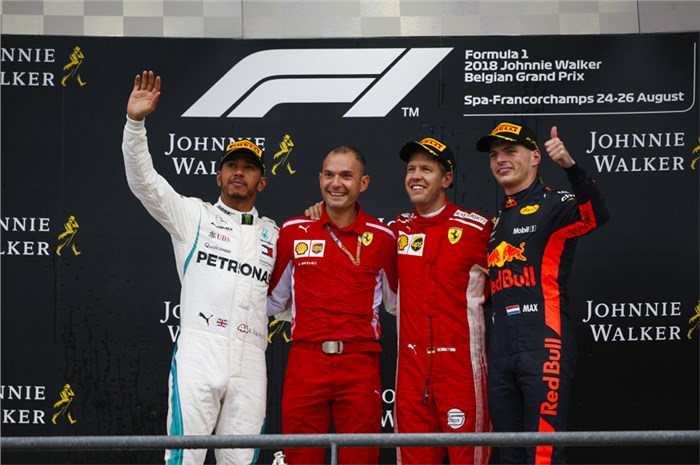 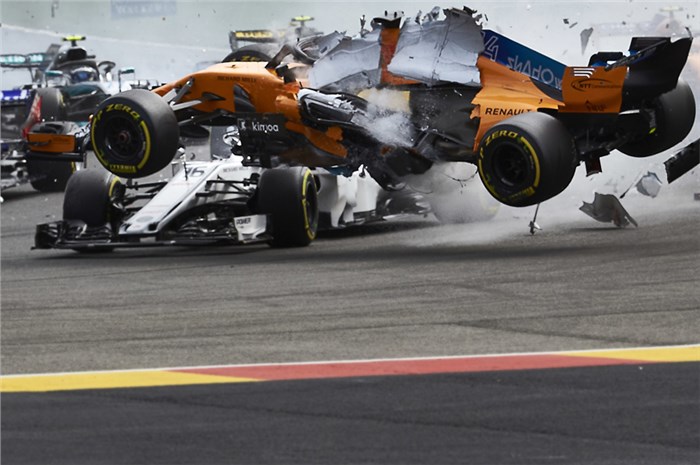 Sebastian Vettel has cut Lewis Hamilton’s lead in the 2018 F1 drivers’ championship down to 17 points after winning the Belgian GP.

Vettel managed to sweep past Hamilton for the race lead on the opening lap just before the safety car was called out due to a massive first corner crash that took out Nico Hulkenberg, Fernando Alonso and Charles Leclerc. Hulkenberg locked both front wheels on his Renault and slammed into the rear of Alonso, who was launched into the back of - and then over - Leclerc, hitting the Sauber's halo device on the way down. The Renault driver has been handed a 10-place grid penalty for this weekend’s Italian GP for causing the crash.

The Racing Point Force Indias of Esteban Ocon and Sergio Perez almost made it four-abreast at the start, heading towards Les Combes. Ocon backed out having pulled almost level with Vettel, which allowed Vettel to hold the lead from Hamilton as Perez swept around the outside of Ocon into third.

Daniel Ricciardo's rear wing was broken by the flying Alonso, resulting in him running wide through La Source and inflicting a right-rear puncture on Kimi Raikkonen's Ferrari. Both cars pitted before rejoining but neither went on to complete the race - Raikkonen retired a few laps later after heading into the pits for repairs multiple times, while Red Bull ultimately decided to retire Ricciardo, who was two laps down by the time he rejoined the race.

Hamilton’s rapid out-lap after he pitted for softs on Lap 21 threatened to put him in position to attack Vettel but he caught the Red Bull of Max Verstappen at the end of the lap, which meant Vettel emerged out of the DRS zone. Vettel held on to the lead till the chequered flag was waved, winning the race just over 11 seconds ahead of Hamilton.

Verstappen scored a lonely third place having got ahead of the Force Indias early on, drafting Ocon on the run to Les Combes three laps after the restart and pulling the same move on Perez a few laps later. Valtteri Bottas finished in fourth place, steadily making his way up the field after having to start at the back for exceeding his engine limit by taking Mercedes’ upgraded engine. The Mercedes driver passed Perez with just a few laps to go, demoting the Racing Point Force India drivers to fifth and sixth place on the team’s first race as a new entry.

Force India’s 18-point haul at the race has already put the team ahead of Williams in the constructors' championship and just one point behind Sauber.

Bottas was handed a five-second penalty along with two penalty points for piling into the back of Sergey Sirotkin’s Williams FW41 at the start. But the penalty did not impact Bottas’ final result since he finished seven seconds ahead of Perez.

The Hass duo of Romain Grosjean and Kevin Magnussen finished seventh and eighth, respectively moving the team to just six points behind Renault in the fight for fourth place in the constructors' championship. Pierre Gasly finished in ninth place, while Sauber’s Marcus Ericsson secured the last points scoring spot.