Vettel closes in on 2011 title

Vettel closes in on 2011 title 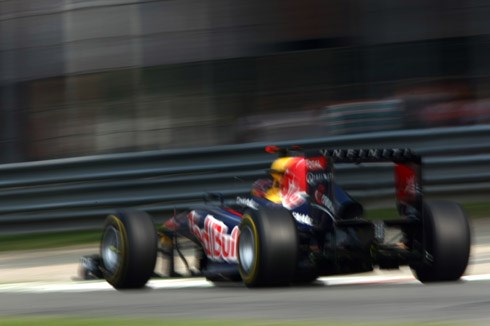 Sebastian Vettel cruised to his eighth victory of the 2011 Formula 1 season as he proved that Red Bull had firmly conquered its Monza weak spot by dominating the Italian Grand Prix.

Jenson Button won a battle with Fernando Alonso for second, with Lewis Hamilton having to settle for fourth after spending much of the race trapped behind Michael Schumacher. Mark Webber - Vettel's closest challenger in the points prior to the weekend - crashed out early.

Alonso had briefly raised the Italian crowd's hopes by surging his Ferrari to the front in a spectacular start from fourth on the grid. Poleman Vettel was slow away and was attacked first by Hamilton's McLaren before Alonso appeared down the inside, briefly took to the grass and slipped ahead, with Hamilton running out of space and falling to third behind Vettel.

Carnage further back would prompt an immediate safety car. Tonio Liuzzi lost control of his HRT under braking and spun down the inside grass before slamming into Nico Rosberg's Mercedes and Vitaly Petrov's Renault in the middle of the Rettifilio. Rubens Barrichello's Williams and Kamui Kobayashi's Sauber picked up damage in the consequent traffic jam, while Bruno Senna (Renault), Sebastien Buemi (Toro Rosso) and Adrian Sutil (Force India) all had to trundle through the gravel in avoidance.

At the lap four restart Hamilton was caught unaware by Schumacher, who had thrust his Mercedes to fourth at the start and then grabbed third from the McLaren.

Webber was taking sixth from Button at the same time, both having lost ground at the start. But when the Red Bull attacked Felipe Massa into the first chicane a lap later, Webber ended up tagging the Ferrari into a spin and smashing his front wing, which then folded under the car and caused him to crash at the Parabolica.

The other Red Bull was faring better. Vettel was all over Alonso as soon as racing resumed, and on lap five he managed to get through into the Roggia chicane despite having put two wheels on the Curva Grande grass moments earlier as the Ferrari defended. After that, Vettel was unstoppable, storming away and holding a 15-second cushion for most of the rest of the race as he notched up yet another victory.

Alonso then came under attack from Schumacher and Hamilton for a while, but soon the latter pair were too busy with each other. The Mercedes' incredible straightline speed and some firm defending from Schumacher kept Hamilton at bay despite the Briton trying move after move.

Button caught them too, and was able to pass both in quick succession on lap 16 - taking Hamilton when he had to abruptly back off as Schumacher slammed the door shut at the Curva Grande, and then slicing down the outside of the Mercedes into Ascari.

That left Button free to chase down Alonso, who he overtook shortly after the second pitstops when the Ferrari got a poor exit from the first chicane.

Hamilton finally overtook Schumacher using the pre-Ascari DRS zone on lap 27, and then mounted his own pursuit of Alonso - catching the Ferrari on the final lap and just running out of time to try a pass.

Massa recovered from the Webber incident to take sixth behind Schumacher.

Sergio Perez looked assured of seventh on a one-stop strategy until his Sauber's gearbox failed, which meant Jaime Alguersuari (Toro Rosso) could take the place after a strong drive from 18th on the grid.

Di Resta, Senna and Buemi recovered from their first-corner delays to complete the points-scorers.

A fine start and a safe passage through the first-lap mess saw Pastor Maldonado run as high as sixth for Williams. But he did not have the pace to stay there and slipped to 11th by the finish.