Vettel back on top at Spa

Vettel back on top at Spa 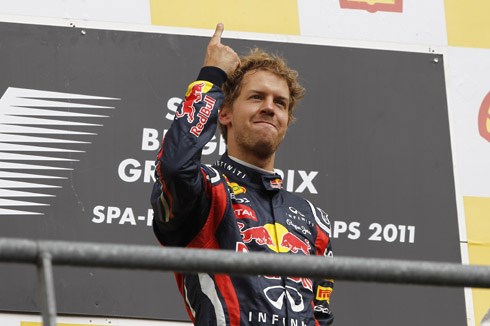 World championship leader Sebastian Vettel claimed his first victory since Valencia in June as he triumphed in a hard-fought Belgian Grand Prix at Spa-Francorchamps.

Vettel led Mark Webber in a Red Bull one-two, while Jenson Button tore through from 13th on the grid to third for McLaren. His team-mate Lewis Hamilton's day ended in a clash with Sauber's Kamui Kobayashi. Fernando Alonso was a victory threat until falling to fourth in the final stint on harder tyres.

A chaotic start had seen Webber stutter off the grid and fall from third to eighth, as Nico Rosberg burst through to second and then slipstream past Vettel to take a shock lead for Mercedes by Les Combes, with Felipe Massa, Hamilton and the fast-starting Alonso next up.

Rosberg's lead lasted until lap three, when Vettel triggered his DRS and eased ahead on the Kemmel Straight. But the tyre issues that had been feared prior to the race started early for the Red Bulls, with Webber pitting after just three laps, and Vettel coming in from the lead next time around.

That put Rosberg back in front, though he had Alonso on his tail as the Spaniard had swiftly passed Hamilton, then outbraked team-mate Massa when the sister Ferrari lost momentum in a failed move on Rosberg. Hamilton also capitalised to further demote Massa as the shuffle unfolded.

By lap seven Alonso was sweeping past Rosberg on the Kemmel Straight to move into the lead, with Hamilton doing likewise on the following lap.

The Ferrari and McLaren managed to keep their initial tyres intact until laps eight and 11 respectively, but the Red Bulls' earlier stops had worked out better for them - and as Hamilton pitted from the lead, Vettel was sweeping around the outside of Rosberg in an epic pass into Blanchimont ready to move to the head of the field again. Shortly beforehand, Webber had produced a similarly spectacular move on Alonso into Eau Rouge as the Ferrari emerged from its pitstop, though Alonso would repass the Red Bull next time around.

Hamilton's challenge then ended on lap 13, when a brush of wheels with the yet-to-pit Kamui Kobayashi's Sauber on the run into Les Combes spat the McLaren violently into the barriers, prompting a safety car period.

Vettel immediately pitted for more tyres, which meant that although Alonso was able to lead again from the restart, the champion was soon easing ahead once more with a DRS pass.

From then onwards Vettel was effectively untouchable, inching away from Alonso through the next stint and clinching his first win in two months. When the Ferrari switched to the harder tyres for the final run to the flag, Alonso's pace tailed off dramatically and he found himself being passed by first Webber, then Button. The Hungarian GP winner had driven another epic race, getting the harder tyre out of the way early, then overtaking car after car in the middle of the race to move himself into podium contention. He secured his place on the rostrum by passing the troubled Alonso with two laps to go.

Michael Schumacher took a superb fifth place from the back of the grid - like Button using the harder tyre in the first stint then charging spectacularly. His Mercedes team-mate Rosberg drifted back to sixth as the race progressed, ahead of Adrian Sutil (Force India).

An additional stop to replace a deflating tyre left Massa eighth, gaining a place when Vitaly Petrov's Renault was delayed on the final lap, while Pastor Maldonado put Saturday's controversy behind him to score the final point for Williams - the first time that the 2010 GP2 champion had scored in Formula 1.

Bruno Senna's return to a race seat brought only a 13th place in the second Renault, as his outstanding qualifying result was wasted in a first-corner tangle with Jaime Alguersuari's Toro Rosso, which earned the Brazilian a drivethrough penalty (and almost took Alonso out too, the Ferrari lucky to continue as Alguersuari smashed his suspension against it). Virgin's Timo Glock was also given a drivethrough after being adjudged to have triggered further multi-car mayhem at the tail of the pack.