Verstappen secured victory on home soil, while the Mercedes duo of Hamilton and Bottas completed the podium. 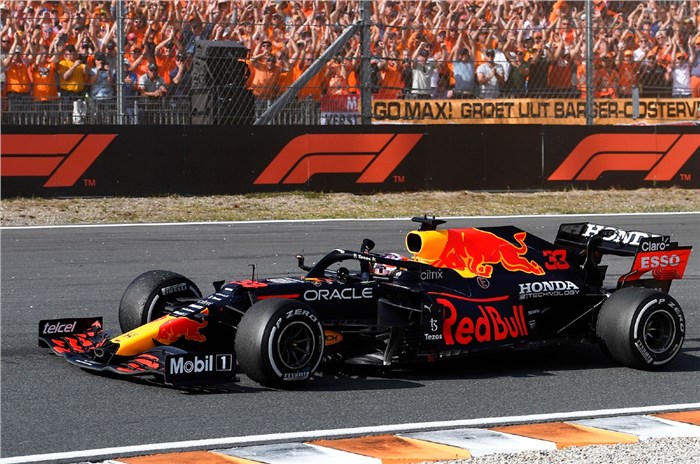 Max Verstappen won the 2021 Dutch GP in front of an elated home crowd, crossing the line ahead of title rival Lewis Hamilton. The Red Bull Racing driver moves back into the lead of the 2021 F1 drivers’ championship after his victory.

The Dutch GP saw F1 return to Zandvoort for the first time since 1985. The tight confines of the historic circuit meant overtaking was going to be difficult, so the goal for all the drivers was to nail the start. Starting from pole position, Verstappen did just that, sweeping in front of Hamilton into Turn 1.

Hamilton kept Verstappen within reach throughout the 72-lap race; with 15 laps to go, he even closed the gap to just 1.8 secs. But the Red Bull Racing RB16 proved to be the superior car on track, and Hamilton ultimately had to settle for 2nd place.

There was some late-race drama as Mercedes pitted Bottas for fresh tyres but instructed him to not set the fastest lap since Hamilton could use the extra point in the championship battle. However, Bottas appeared to ignore the order, setting the fastest lap regardless. But Hamilton himself pitted for new soft tyres on lap 70 and set the fastest lap himself at the very last moment.

All of this allowed Verstappen to comfortably cross the chequered flag, making history as the first ever Dutch driver to win on home soil.  “The expectations were very high going into the weekend and it’s never easy to fulfill that. But I’m of course so happy to win here, to take the lead in the championship. It’s an amazing day. Just the whole crowd. It’s incredible,” Verstappen said.

“The start was very important, I think we did that well, and then of course Mercedes tried to make it very difficult for us but we countered them all the time really well. We can be really pleased with the whole team performance today.”

Perez goes from pitlane to P8

The top three finishers were the only ones to finish on the lead lap of the race. Pierre Gasly finished best of the rest, to hold on to 4th place ahead of Charles Leclerc. Behind them, Fernando Alonso snatched 6th place after overtaking Carlos Sainz on the last lap.

Perez had the odds stacked against him. He had to start from the pitlane after Red Bull decided to replace his car’s power unit. To complicate matters further, he had to pit early after suffering a flat spotted tyre. But the Mexican made the most of the situation and fought his way up the order to finish an impressive 8th.

Esteban Ocon and Lando Norris rounded out the top 10.

Having earned his seventh win of the season, Verstappen moves three points clear of Hamilton in the standings.

Next up, F1 heads to the iconic Monza for the 2021 Italian GP on September 10-12. Mercedes is expected to be strong on the power track, so the championship battle remains scintillatingly tight.